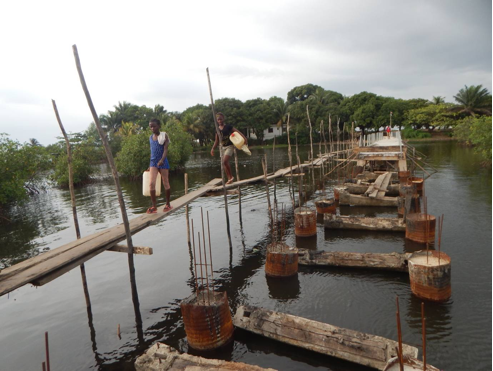 The project was awarded to the Liberia Corporation for Development, Reconstruction and Investment to build at a cost of US$66,900. When completed, it will connect residents of the New Matadi Estate, Fredrick Island, and 12th Street communities.

A source familiar with the project who spoke on condition of anonymity for fear of retribution said the agreement with the contractor was signed on May 1, 2015, with the expected duration of six months.

Instead, the lead contractor for the project wrote the Liberia Agency for Community Empowerment, the implementing government agency, requesting a one month extension due to the swampy environment, coupled with the rainy season at the time. The source added that the initial amount of US$66,900 was found to be insufficient to complete the bridge project.

The US$66,900 has only been able to complete a portion of the project from the New Matadi to Fredrick Island. A view of the completed portion of the bridge from the New Matadi side. Photo: Zeze Ballah A partial view of the old makeshift bridge along with the new bridge under construction on the Fredrick Island side. Photo: Zeze Ballah

Rogers Wesseh was one resident of New Matadi Estate who had hoped the bridge would have been completed before the upcoming rainy season. He said he and other residents would find it very difficult to traverse the makeshift bridge.

“Residents of the three communities have suffered for too long and the timely completion of the bridge could relieve them,” Wesseh stressed.

He added that it would be in the best interest of the residents for their representative to explain to them the reasons for the delay.

Munah Pelham Youngblood, representative for the 9th district, held a meeting with residents of the three communities in June 2015 to inform them about the US$66,900 allocated for the bridge’s construction. She has yet to explain to her constituents the reason for the project’s delay.

Korpo Flomo, a 54-year-old mother of five and a former resident of the 12th Street community, was in the process of relocating to the Fredrick Island community when she was interviewed. She spoke about her fears of using the makeshift bridge during her move.

“I hired a canoe for L$2000 to transport my belongings across the river for fear that any of my children could fall into the river because of the deplorable state of the makeshift bridge,” Flomo said. Korpo Flomo and children removing their belongings from the canoe. Photo: Zeze Ballah

She recalled that some children and elderly people have, in the past, fallen into the river because of the poor condition of the bridge.

As the rainy season draws nearer, parents like her, whose children usually use the bridge to go to school, are fearing for their children’s safety because most of the sticks used to construct the makeshift bridge are rotting.

“It is my fervent prayer that those responsible for this bridge would speed up the work to allow residents of the three communities and others to move freely,” Flomo implored. Attempts to reach Youngblood did not materialize.

When The Bush Chicken contacted Enoch Jordan, the manager of Liberia Corporation for Development, Reconstruction and Investment, he admitted that when the project began, engineers working on it soon realized that it had been underestimated. However, the company did not immediately notify the Liberia Agency for Community Empowerment.

According to Jordan, the project is now being held up because the amount has not been allotted, though he was not specific about how much is needed to complete the project.

He claimed that the delay in the project is not the fault of the contractor. Flashback: School children use the makeshift bridge to get home from school Photo Zeze Ballah

The construction of the bridge was delayed in 2013 along with other district projects across the country before members of the House of Representatives crafted a program to help fast track various developmental projects under the county development fund called ‘Legislative Projects.’

In 2014, lawmakers voted to set aside US$73 million from the 2014/2015 fiscal year budget for the 73 districts in the country for allocation towards projects within those districts. The legislature concluded that County and Social Development Funds were being misapplied by county authorities and decided that the Legislative Projects program would be more effective.

The US$1 million earmarked for each district could not be disbursed due to shifting budget priorities during the Ebola crisis. As a result, members of the lower house decided to only provide US$5 million in total for all 73 districts.