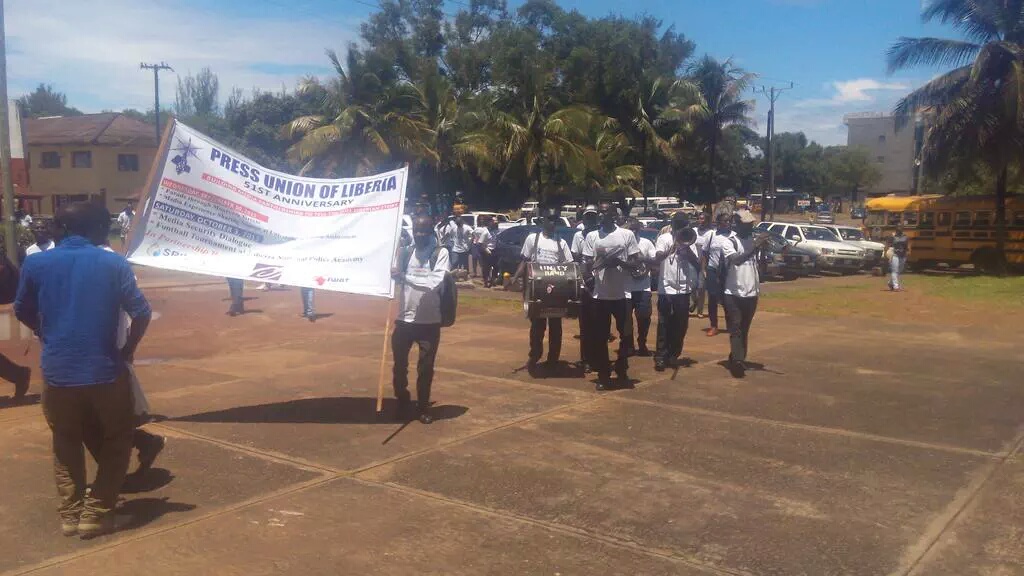 Following a march through downtown Monrovia, the celebration climaxed at the University of Liberia auditorium at the Capitol Hill campus, where a roundtable was held on the evolution of the PUL and journalism in Liberia.

PUL President Abdullai Kamara inaugurated the event by noting that the Union was formed 51 years ago by journalists concerned with the shrinking space in which they could work, as the rule of President William V.S. Tubman, then in its 20th year, became increasingly intolerant.

The PUL President noted that today, despite the presence of several former PUL members in the legislature, “the very contempt charges that our forebears suffered, continue.”  Kamara made a passionate plea for the preservation of free speech in Liberia, observing that “the more opportunities people have to discuss problems in the country, the more chances we can find solutions.”

The panel that followed, moderated by LIB 24 radio personality Tetee Gebro, featured several veteran broadcasters speaking about their experiences and sharing their insights on ways to build and strengthen the press.  All of the speakers were graduates of the University of Liberia though several also obtained graduate degrees in the United States. Aaron Kollie, a key ex-media ally of Charles Taylor, and owner of Power TV and Power FM, initially echoed Kamara’s remarks about the tenuous nature of the press in Liberia.  While he noted that much had improved since 1990 when he sought to cover the outbreak of the civil war, he said the PUL “must oppose any attempt that seeks to impeach press freedom in Liberia because there seems to be a drive in that direction.”

Kollie subsequently appeared to backtrack from this critical position observing that “today I operate my radio and TV station unrestrained.”

Kollie also spoke on the “gap between the analog and digital age that we currently find ourselves [in].”  He advocated for the establishment of a school of journalism, called for the Department of Mass Communications at the University of Liberia to provide training on more advanced technological tools, and noted that the quality of journalism would improve as female journalists are empowered.

He also emphasized the importance of diction among radio personalities and decried the practice of broadcasters reading verbatim material culled from online sites that was not geared for oral delivery.

The second speaker, Philip Wesseh, Managing Editor of The Inquirer, shared insights on reporting in dangerous situations.  He touched on the “dichotomy of media as a business and a public institution,” but did not explore this critical question underpinning the legitimacy of Liberian media in detail.

Wesseh also spoke on the importance of training, noting the number of international trips and training opportunities he was afforded through his journalistic work.

Completing the trio of panelists, Emmanuel Bowier, the former Minister of Information, articulated a more direct historical perspective.  Noting that he has been a member of the PUL for nearly 40 years, he opened his remarks by having Kollie read a letter he had written to President William R. Tolbert in 1974 during his student days and stressed the importance of keeping records and preserving a historical memory.

Bowier noted that there is strength in unity, stating, “the Press Union is the most powerful institution in Liberia that does not know it has power…we have to be together….to be relevant and respectable.”

As calls for a war crimes tribunal in Liberia mount, Bowier, who served in former President Samuel Doe’s government when the civil war erupted, noted that “there is always a tomorrow” and urged the press to “not follow unjust laws,” as he had not when requested by the Doe government to close media outlets for political reasons.

PUL President Kamara noted that the Union seeks to continue to work with international partners like NED, Internews, OSIWA, and Trust Africa as it addresses media challenges in Liberia.  He noted that a particular emphasis would be to deepen ties with the security sector.  To this end, the second part of the PUL’s 51st-anniversary celebrations will be held this Saturday morning at the National Police Training Academy.