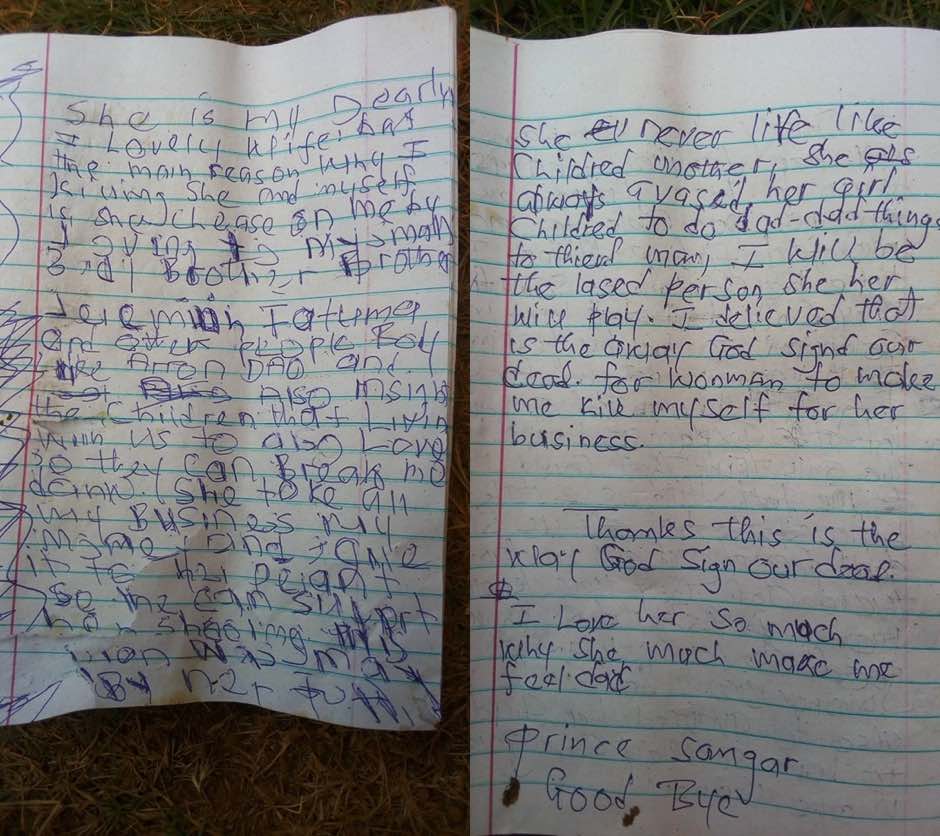 After failing to kill himself, Sangar was mobbed to death by a crowd. He left behind a suicide note where he detailed that his wife, Loretta Gbeadeh, had been having frequent affairs with his friends and other people in neighboring communities. He specifically named two of his friends â€“ Jeremiah Fatuma and Aaron Dao â€“ as people who had affairs with his wife.

Sangar said he took his late wifeâ€™s life because he could not bear to lose her to another man.

â€œShe has made my children to disrespect me,â€ he wrote in his letter.

The Karnplay police commander, Augustus Mantor, said when police arrived on the crime scene, Sangar was still alive after the suicide attempt.

Mantor said Sangar tried to make his way out of the home when the police overpowered him and handcuffed him. James Mataldi of Radio Karnplay, who was on the scene, told The Bush Chicken that it appeared that Sangar had used pieces of wood to pummel his wife to death.

After the police had taken custody of Sangar, Mantor said an angry crow overpowered police officers and murdered Sangar. The Crimes Investigation Department commander in Sanniquellie, James Kartoe, later arrived on the scene to conduct a preliminary investigation on the incident.

Meanwhile, Paramount Chief Joseph Yormie reportedly asked Kartoe to turn over the two bodies to him for burial. The chief told Kartoe that the communityâ€™s action was simply in retaliation due to frustration, suggesting that those involved in the mob violence should be let off the hook.

However, inspector Kartoe has told the paramount chief and citizens that the government would continue its investigation and would not compromise the murder case.

Early in the month, a similar incident occurred where a 37-year-old man in Pleebo, Maryland admitted to beating his wife to death.

Domestic violence is a major concern for women in Liberia, with UN WOMEN reporting that on average, 35 percent of women with intimate partners experienced physical or sexual violence at the hand of their partners over the past 12 months.

The situation is exacerbated because women are often severely economically disadvantaged and generally rely on their partners for survival. This makes it more difficult for them to leave dangerous relationships, especially if they are not aware of the available legal protection mechanisms.