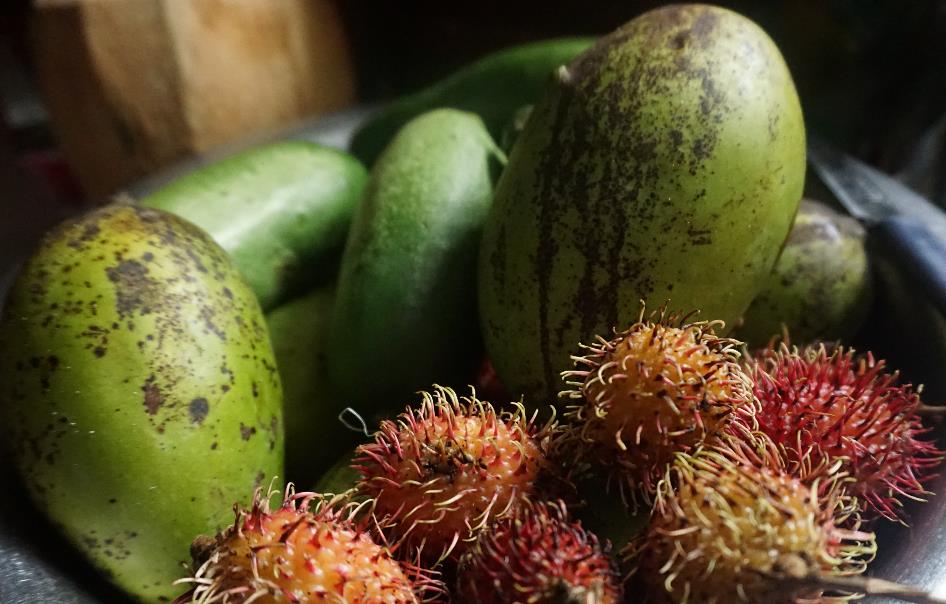 Many visitors to Liberia will relish the freshness and succulence of fruits available by almost every roadside. The mangoes, organic in nature and untainted by long stays in storage facilities, are sweeter than what one would encounter in highly industrialized countries. Moreover, everyone knows that bottled coconut water comes nowhere close to drinking the real deal and feasting on its soft fleshy goodness afterwards.

However, despite the fact that ordinary fruits taste much better in Liberia, one would be missing out on a lot if they didnâ€™t try out these five exotic fruits while in Liberia. Known to most Liberians as â€˜monkey appleâ€™ or sometimes as â€˜monkey nut,â€™ these fruits become available around the mid-rainy season. When the fruit is in the season, youâ€™ll find them in every market or by the roadside everywhere.

They can be frustrating to eat because it takes a lot of energy to extract the sweet part of the fruit from the seed. To open the spiky-haired fruit, press your thumbs together until you make an incision â€“ having long nails helps. Once youâ€™ve punctured the covering, itâ€™ll be easy to peel the entire outer shell off to reveal the sweet cream-colored fruit. The fruit, though, is just a layer of less than half an inch in thickness. Beneath that is a seed that most Liberians donâ€™t eat.

Rambutan is found in at least two varieties in Liberia â€“ one with a dark red shell and another shown with the yellow shell. Depending on the variety of the fruit, the juicy part of the fruit may come out more easily. One of the most underrated and underutilized fruits in Liberia, breadfruits are incredibly versatile. They can be served as fries, they can be made in a soup with vegetables and meats, they can be baked with cheeses melted on top, they can be boiled in the same way as cassava and eaten with a delicious pepper sauce or what Liberians call gravy, or they can be pounded like dumboy (i.e. fufu, for other west Africans) and paired heavenly with palm butter.

Unfortunately, breadfruits are notoriously scarce in markets despite the ubiquitous presence of the trees. Youâ€™re better off finding someone who has a breadfruit tree in their yard than going to the market.

In Liberia, breadfruit trees bear fruits twice a year, with the first fruits arriving around June and the second set arriving closer to December. The sweet and tart fruits are known in Liberia as â€˜sour sour,â€™ although, given Liberiansâ€™ penchant for avoiding enunciating their words, this often gets confused with our next fruit â€“ sawsaw. Mirabelles are highly perishable but have a pungent and pleasant scent that is always recognizable without even seeing the fruit. Soursop in a bowl. Photo: Digi_shot/Flickr

Known as â€˜sawsawâ€™ in the Liberian market, soursop has spiky and mildly prickly edges. Even when ripe, the fruits are green. Most soursops are shaped like an abnormal heart, and coincidentally, they are rumored to inhibit cancerous growths.

The interior of the fruits are white and the fruits have a creamy, sweet taste that evokes a mixture of a banana and a pineapple. After cutting the fruit as depicted in the picture, remove the green peeling and suck on the fruit to enjoy the juices, spitting out the remnants afterwards. This sour fruit is called â€˜golden plumâ€™ in Liberia and is best when fully ripe, but some Liberians (mostly women) like to eat the unripe fruits with salt and pepper. The season to find Ambarella in Liberia is late August through September. The fruit can be used to obtain a very luscious and distinct tasting punch. If you have some time on your hands, Ambarella can be used to make jam and sauces.

Sharing
Tags Discover Liberia
Contributions to The Bush Chicken are not tax deductible.