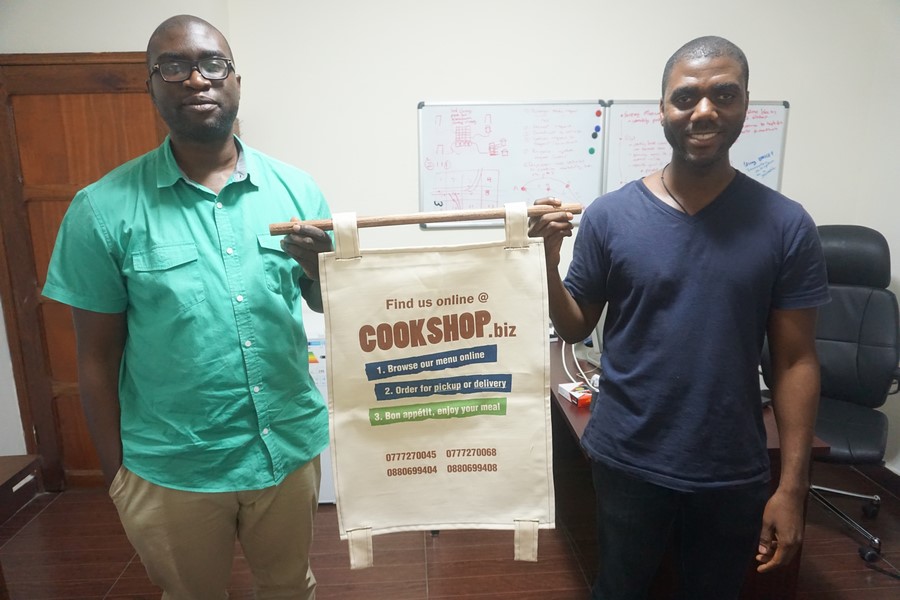 MONROVIA, Montserrado â€“ Ever been trapped behind tons of work in a Central Monrovia office without the time to go out for lunch? Or just craving food from one of your favorite restaurants but feeling too lazy to go get it? Charles Cooper and Mlen-Too Wesley have just the right solution for you â€“ Cookshop.biz.

A relatively recent startup, Cookshop delivers food to customers from 14 of Monroviaâ€™s best restaurants. Their operation has been continuously adding more restaurants as they seek to expand to reach more customers.

Cookshop had to shut down during the Ebola outbreak out of concern for the safety of their workers, but they have now more than recovered from the break. Cookshop has now increased the number of orders a day from seven to 15. The Cookshop office is located at the Afropolitan building, near the intersection of Benson and Newports streets. Photo: Jefferson Krua

For Cooper and Wesley, the decision to start Cookshop was not organic but rather, a confluence of favorable events followed by a methodical examination of a variety of possible industries and businesses to enter.

Both men said the arrival of Cellcomâ€™s 4G service and the Africa Coast to Europe submarine cable was what spurred them into action.

â€œBefore that, it was almost impossibleâ€ to access the internet uninterrupted, let alone build a web-based application for the local market, Wesley said. He would often camp out at P.A.â€™s Ribhouse at ELWA Junction, as it was one of the few areas where he could get a decent connection.

Wesley said internet costs were also prohibitive back then. When the ACE cable arrived in Liberia, he noticed that the cost of internet access started to drop.

Once these opportunities presented themselves, Cooper and Wesley, already acquainted with each other by now, started brainstorming about industries to enter.

Cooper said they wanted to do something that had never been done before in Liberia, but within sectors that were huge. The three major industries they explored were real estate, food, and transportation.

They ended up settling for food. Wesley said Cookshop was a natural choice for both of them because they both knew a lot about food delivery from their college days abroad.

â€œWhen I was in college, I used to order Chinese food in my dorm.â€

Both Cooper and Wesley attended college in the United States, with Wesley also studying and working in Ghana at some point.

Cooperâ€™s background is in graphic design, having designed website prototypes for companies such as Bank of America. Additionally, he has worked on many e-learning projects. Wesley, on the other hand, has a stronger background in software development although he initially studied political science and economics. Charles Cooper, one of the founders of Cookshop. Photo: Jefferson Krua

The two men moved back to Liberia around the same time and Wesley said a mutual friend connected him to Cooper.

Once they decided to focus on a restaurant delivery service, their mutual past in working for startup companies allowed them to understand what they needed to do to move forward. The process of writing business plans, finding investors, and marketing was not new to them.

â€œIâ€™m your typical serial entrepreneur,â€ Cooper said. He said they understood what they needed to go through; they just â€œdidnâ€™t know how to do it in Liberia so much.â€

Adapting an Established Concept to the Liberian Market

Cooper and Wesley researched â€œsome of the big boys around the worldâ€ to understand the mechanics of running a food ordering service. These included Seamless, Grubhub, and Justeat, all of which are based in the US.

The Cookshop founders knew that they had to ensure that the service was â€œspecifically made for Liberia.â€ Part of that was to make it a â€œlightweight applicationâ€ to accommodate for slower internet speeds.

They also knew that they would have to deal with delivery, something that Grubhub and Seamless do not deal with as most restaurants in the US have their delivery service.

Cooper said they initially tried to outsource the delivery but eventually went ahead with it.

In dealing with delivery, they also had to ensure that Cookshop was designed to accommodate the informal system of addresses found in Liberia.

Further, to tailor Cookshop to the Liberian market, the backend software used by employees was designed to be as simple because â€œthe workforce is not exactly computer literate yet,â€ as Cooper put it. This part of the process employed Cooperâ€™s previous background in designing e-learning user interface.

Restaurants signing up with Cookshop can expect to pay US$100 per month for the basic tier of service. For their customers to receive free delivery, restaurants can opt for the higher tier.

Such fees for participation may sometimes make it difficult for some restaurants, especially Liberian-owned ones, to sign up with Cookshop. Cooper said the issue may be less of the cost of the service and more about a need for reorientation in how people think about businesses.

Even when the service was initially free, he said they had problems signing up Liberian restaurants along with a few other restaurants owned by foreign nationals. â€œIt will happen slowly,â€ Wesley chimed in. He said attitudes are starting to change as restaurant owners see the benefit of their colleagues who have signed up.

Another hurdle that the Cookshop team dealt with was what Wesley, in his attempt at political correctness, called â€œmotorcycle regulations.â€ Cooper said police would take their delivery motorcycles from on the sidewalks and transport them to the police stations. When they went to retrieve the bikes, they would no longer have the batteries in them.

Despite the inconvenience to their business, Wesley said, â€œthe police is a huge organization, and itâ€™s not fair to attribute it to them all.â€ He sympathized with them as he understood they were trying to solve a public safety problem. This year, Cookshop has had no such problems with the police. A delivery driver for Cookshop sits on his bike. Photo: Jefferson Krua

As Cooper and Wesley discussed the challenges with running Cookshop, the lights began to flicker, signaling that fuel was out of the generator. For Cooper and Wesley, the police issue was nothing compared to what they continue to face with the lack of reliable and affordable electricity.

Arguably, the biggest hurdle Cookshop has faced is the Ebola crisis. After launching in February 2014, they made the decision to shut down in September of that year because they did not think it was safe for their employees.

They have since rebounded since relaunching in July of this year. They have recovered most of the restaurants that they lost during the crisis, including adding others that were not previously doing businesses with them.

After Ebola, an Exponential Growth

This month, Cookshop is expected to generate US$5,200 in revenues and continues to be growing exponentially. At this pace, the owners expect to break even next year.

â€œWe figured out a way to hit our target market,â€ Cooper said, also adding that they are now diversifying from their initial target of expatriates to more Liberians. Although expats are more used to services like this, there is a lot of turnover because many expats tend to rotate job locations. Therefore, as Cookshop is acquiring new users, the company is also losing others.

Wesley said â€œexpats and returnees were an obvious marketâ€ because they initially â€œdidnâ€™t have the money to market the behavior change.â€

Now, they want to reach out more to Liberians. â€œWe want the Liberian market to get used to it,â€ Cooper said. He said Cookshop had been offering deals aimed at drawing in Liberians, such as a recent $1 off Liberian food deal with a local restaurant. He said he would like people to get used to ordering fufu and soup from Cookshop. A dish of attiÃ©kÃ© that was delivered via Cookshop from Evelyn’s, a restaurant in Sinkor. Photo: Jefferson Krua

Eventually, Cooper and Wesley said they want to expand to other West African countries as they believed Liberiaâ€™s middle class was not large enough to create the type of demand they wanted to see for Cookshop.

They did not seem too worried about other competition in those countries. â€œThereâ€™s no competition thatâ€™s really taking the market out there in West Africa,â€ Wesley said.Â  â€œCharles and I have worked with startups so we know how to do competitive analyses.â€

A sign that the Cookshop founders are heading in the right direction is that they are now being approached by investors who want a part of the business.

Since Cookshopâ€™s inception, Cooper and Wesley have made a conscious decision to have only Liberian investors. They want to show that a successful, world-class business can be created, financed, and operated by Liberians. Their aim is for Cookshop to remain â€œLiberian owned, Liberian built, in Liberia.â€

They are proud to have a staff of young Liberian college students whom they pay by the hour, a rarity in Liberia. In fact, their manager is only 19 years old. Wesley said he was proud to give Liberian students the opportunity to â€œwork for a dot-com company in Liberia.â€