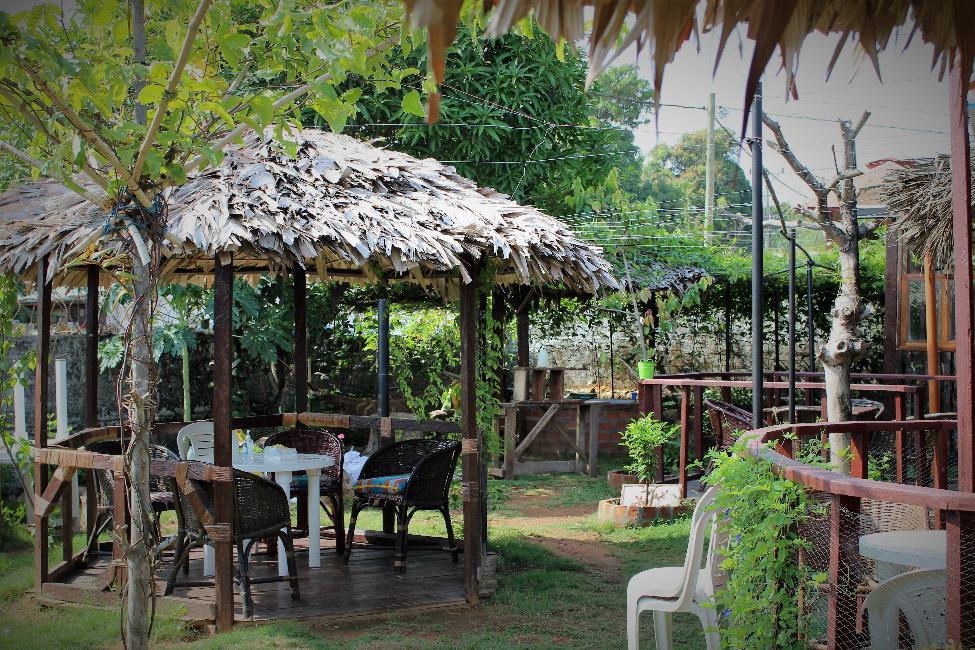 MONROVIA, Montserrado â€“ Nestled between Payne Ave and the beach on 19th street is a relative newcomer to the neighborhood that looks more like a botanical garden than the restaurant it is.

The particular look of the Lila Brown restaurant was consciously curated by founder and manager Tarek Ghosn, who wanted a relaxing environment.

Ghosn said he chose the name of the restaurant to reflect something â€œmore oriented towards Liberiaâ€ after resisting names like â€œLittle Havana.â€ His Buddhist father suggested that he call the restaurant â€œLilaâ€ because, according to him, it means â€œbeautyâ€ in Hindi. The nameâ€™s closeness to the lilac color and flower also intrigued Ghosn.

â€œSo naturally, I got excited and decided to call it Lila Brown,â€ he said. â€œBecause itâ€™s the richness of the brown soil of Liberia, the trees of Liberia, everything about Liberia screams richness and naturally, the beautiful women of Liberia. So the element of Lila Brown is brown beauty and Liberian beauty.â€

Coincidentally, when Ghosn went to register his business, he found out that â€œLilaâ€ also had a Kpelle meaning â€“ â€œsatisfied.â€

He said he extended this theme of Liberian beauty in the makeup of the restaurant, claiming that everything involved in the restaurantâ€™s construction and dÃ©cor was sourced from Liberia. Even the bar was custom made from wood in Liberia. The one exception are the wine barrels he imported from Lebanon. Heâ€™s filled those barrels with cane juice, a local alcoholic beverage, to give it â€œan oaky taste.â€

Despite Lila Brownâ€™s recent appearance in the Sinkor neighborhood, the restaurant had been a staple of the Mamba Point neighborhood for about three years until a land dispute prompted the move.

Concerning the move, Ghosn said, â€œThe people I leased from lost the land. So right now itâ€™s a vacant lot and I wasnâ€™t allowed to take anything. At one point I had sheriffs on me while the business was running simply because the guy was frustrated.â€

The additional costs of constructing a new location from scratch, frustrated Ghosn. It was especially unfortunate as it came right after the Ebola outbreak, which hit most sectors hard, especially the hospitality industry.

â€œAs a business, itâ€™s a good business, but itâ€™s not a successful one at all,â€ he said, adding that the confluence of these two catastrophes caused him to lose 12 kg. â€œThe overhead is too much, we have to operate on aÂ generator because [power from the Liberia Electricity Corporation] is not functioning all the time. Normally I have two generators, and one is destroyed right now thatâ€™s why I have to turn this one off now. Here, we have water and sewer but they are not connecting [new customers] so I have to use a well.â€ He used the move to the new area as an opportunity to change the scenery to be even more inviting. Lila Brown no longer has the relaxing sounds or the views of the waves beating against the shores.

Instead, the restaurant has been decorated with over two different species of plants including cocoa, guava, pineapple, melon, watermelon, and lots of passionfruit. There are also two different species of pawpaw (papaya), including a pink variety that is grown in Nigeria. Inexplicably, Ghosn made it a point to plant Liberian pepper every 1.5 meters around the restaurant. He has the habit of offering freshly picked pepper pods to unsuspecting patrons. Some of the plants are even used as ingredients in drinks, including the cinnamon and passion fruit.

On the side of the restaurant is a greenhouse along with an aquaponics system where Ghosn uses the waste from the fish heâ€™s growing to fertilize herbs like basil. Still, customers are not rushing to the new location. Since Ebola, Ghosn said, â€œsomething about Liberia hasnâ€™t been correct, and my industry reflects directly on the health of the [economy] because the more people there are then that means the more comfortable people are spending money.â€

Contrary to what one would expect, Ghosn said the majority of his customers are not expats. â€œIf they do an event for themselves, they show up,â€ he said, adding that he typically gets Liberians who are â€œgovernment employees, private company [employees], bossmen, managers, and thatâ€™s the vibe Iâ€™ve been trying to push for.â€ Along that line, he was adamant that he â€œcater to the entire population.â€ The prices for the food on the menu starts at â€œ$5 for a Liberian dish on a daily basis.â€ In the past, Lila Brown has even offered palm butter made with fresh basil from the garden. Additionally, the menu offers about three of what Ghosn calls â€œLiberian pizza.â€ The wall outside the restaurant. Photo: Jefferson Krua

Ultimately, Ghosn stressed that the key for a stable supply of customers lies in enabling more Liberians to have disposable income to encourage them to go out.

â€œWhen the economy is moving, the people are more comfortable instead of sitting at home and stressing, why my job isnâ€™t making me much money or where am I going to eat tomorrow or how am I going to pay for gas. More people sitting at home going, you know what, letâ€™s just go out today, I feel in the mood. Most people have money but they donâ€™t want to spend it because they donâ€™t know what going to happen [tomorrow].â€

To achieve this, Ghosn believes there is no better sector to empower than the agriculture sector. He also advocated for supporting not only local Liberians in agriculture, adding â€œmost NGOs only want to cater to local Liberians all the way on the farms and that only helps so much.â€

He gave the example of his friend William Tolbert, who struggled to get support from NGOs for his organic farm because he had lived in America. â€œThey consider that privileged,â€ Ghosn said. â€œWe need to support more people that want to invest in the country. We need to empower the local markets but we canâ€™t do that by only investing in the locals. Lots of people are investing here who are not local but theyâ€™re teaching locals, theyâ€™re employing locals.â€