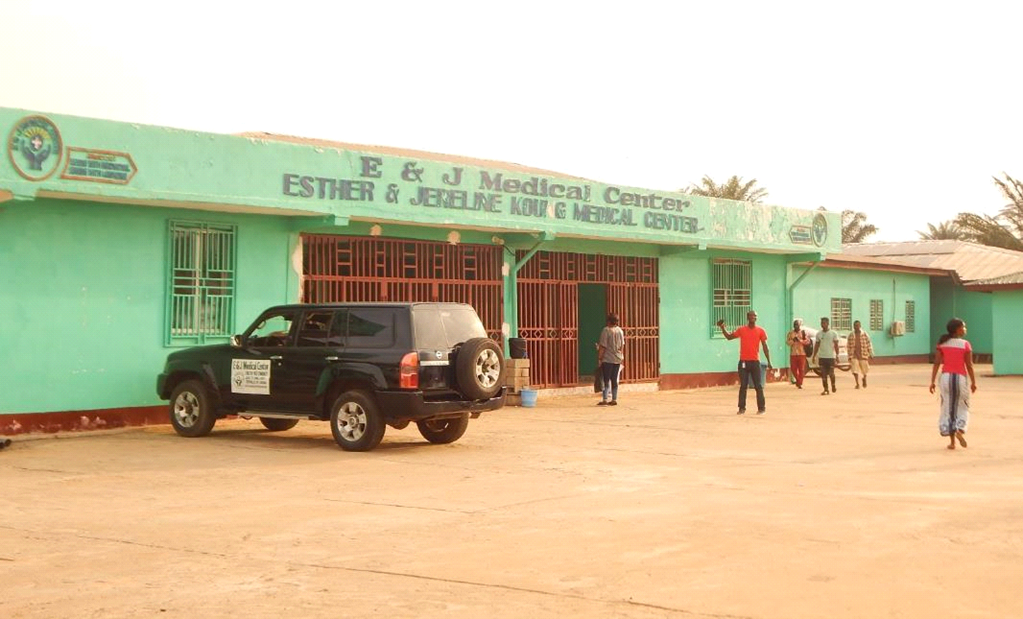 MONROVIA, Montserrado â€“ When Rep. Jeremiah Koung was campaigning for a seat in parliament in 2011 elections, he promised better health care for his constituents through a private hospital run by a foundation named after his mother and daughter.

The hospital, called E&J Medical Center, was built in 2006 by Koung, Nimbaâ€™s first district representative, through the Esther and Jereline Foundation. The 125-bed medical facility has become the third referral hospital in Nimba, after the Ganta United Methodist Hospital and Jackson F. Doe Memorial Hospital in Tappita.

Unlike public health facilities in Liberia, which are operated by the government and where all services provided free, E&J Medical Center charges for some services, though it offers others like maternal care for free.

It has also received some public funding to support its operationsâ€”and that is where the controversy lies. The code of conduct for public officials, which covers members of parliament, says that public money should not support the financial interests of politicians. The law says that all public officials and employees of government are to take decisions solely in the interest of the public good.

â€œPublic officials and employees of government shall not place themselves under any financial obligations or other situations of conflict that impair or are likely to impair the performance of their official duties,â€ the law states, adding that: â€œThey shall use allotted resources only for the authorized public purposes for which they are provided.â€

The law also says, â€œNo public official or employee of government should use an official position to pursue private interests that may result in conflict of interest.â€

Despite the code of conduct, there are several instances of politicians using their influence during budget discussions to make allotments for their private companies or foundations. Koungâ€™s E&J Medical Center is one of those. Up to 2017, the hospital has received US$300,000 from the national budget, through an annual allotment from the Ministry of Health. â€œUntil the establishment of the E&J Medical Center, we all here went to the Ganta United Methodist Hospital for treatment, especially for critical illnesses, and we got better treatment,â€ Anthony Yiligon, a resident of Ganta, said in an interview.

The E&J Medical Centerâ€™s chief financial officer, Ebenezer Tokpah, said patients are charged for services mostly to pay for the cost of running the hospital, but fees are dependent on the ability of the patient to pay.

â€œWe live in a community where the income of the people sometimes stops them from seeking health services. So, on the basis of that, we look at their conditions, and then, we levy what is called charges on them in fees. Sometimes, itâ€™s almost like free,â€ Tokpah said.

He said L$14.4 million (US$103,597) is generated annually in fees for services rendered at the hospital, in addition to the governmentâ€™s budgetary support of US$25,000 annually, making its total income US$128,597. However, he said a total of US$540,000 would be required annually to run the hospital properly. This means that the lawmaker does not generate any financial profits from the establishment, although he may use it as a political tool to win the votes of his constituents.

The hospitalâ€™s chief financial officer also added that maternal health services at the hospital were provided free to pregnant women. He said except instances of complications during pregnancy or deliveries where the hospital shares cost with patients, all maternal services are not chargeable. Free maternal care was among Koungâ€™s campaign promises during the last legislative election campaign.

Dr. Peter George, the E&J Medical Centerâ€™s chief medical director, also disclosed in an interview that the hospital partners with the American College of Surgeons and Hernia International to conduct free surgical missions each year. George said the aim of the surgical mission is to provide free surgical operations to Liberians.

Anthony Glee, another citizen of Nimbaâ€™s first district residing in Monrovia, said it would have been better if the lawmaker had used his influence to increase governmentâ€™s allotments for the Ganta United Methodist Hospital, rather than using the publicâ€™s money to fund his personal institution.

The Ganta United Methodist Hospital receives the same allotment of US$25,000 in the national budget. This, however, does not raise any conflict as the establishment is a non-profit without any links to any lawmakers or officials in the government. The hospitalâ€™s administrator, Allen Zomonway, declined to be interviewed for this story. Koung did not respond to several requests for comment on the hospital in time for publication, but former House Speaker Emmanuel Nuquay, whose private foundations also received budget allocations, denied that the action was a conflict of interest, as prescribed by the code of conduct. Nuquay said all transactions that passed through the budget process is considered legal.

â€œThe budget is a law passed by the Legislature and approved by the president. So, all the transactions are legal,â€ he said.

During his tenure as chair of the Committee on Ways, Means and Finance Committee at the House of Representatives, Nuquay presided over budget discussions and made allotments to institutions linked to himself or other politicians.

Among them were Radio Gbasue, which he privately established in 2011 for political promotion in his district; Radio Joy Africa, which provided him political promotions, and Trinity Bible College and School of Business in Harbel, owned by Margibi Senator Jim Tornonlah.

In the same year of the allotment, Nuquay picked Tornonlah as his political choice for the countyâ€™s vacant senatorial seat. Tornonlah also did not comment on the story, but Nuitah Womgbah, the communications strategist of Trinity Bible College, dispelled rumors that the allotment made by the government was used to fund Tornonlahâ€™s senatorial campaign.

Oscar Cooper, another senator in Margibi, operates a private rubber farm in Cinta. A school and a clinic on the farm for his workers and their families also benefited from allotments in the national budget.

Cooper dismissed the suggestion that receiving government funding for the hospital and clinic on his farm conflicted with his position as a senator. He said the two institutions operated under the Adella Cooper Foundation, a non-profit organization managed by his wife, and provided services to several other residents of nearby towns and villages that were not employees or dependents of his employees.

While the school remains operational and providing education for over 300 children of his employees, the clinic has remained closed since the government cut its subsidy support in 2014. Sen. Cooper attributed the closure of the clinic to the Ebola pandemic which struck the country in 2014.

â€œWe closed down in 2014 because we didnâ€™t know about Ebola and didnâ€™t want the people to catch Ebola,â€ Cooper said.

But Verdierâ€™s agency is not responsible for enforcing the code of conduct. That responsibility lies with the Office of the Ombudsman, which has never been set up since the code of conduct was passed as law. Former President Ellen Johnson Sirleaf appointed three members to head the office in 2017, shortly before her term ended. However, the Senate delayed in approving Sirleafâ€™s appointments. Since taking office, Pres. George Weah has not yet appointed any officials to head the agency.

This story was produced by The Bush Chicken. It was written as part of Wealth of Nations, a pan-African media skills development program run by the Thomson Reuters Foundation in partnership with the African Centre for Media Excellence. More information at www.wealth-of-nations.org