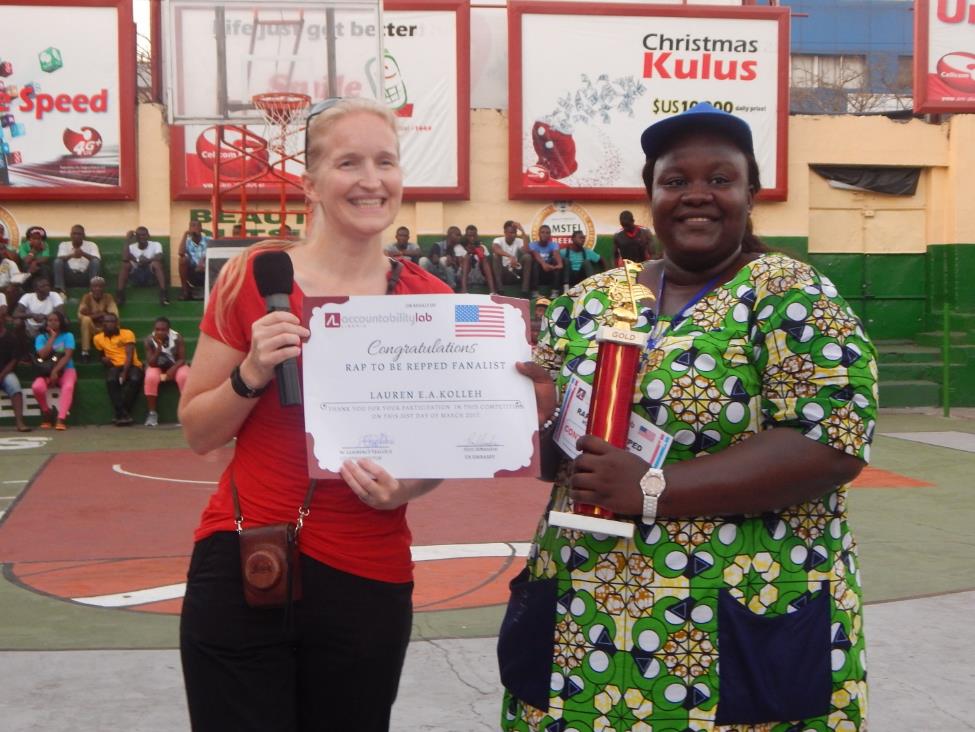 Five finalists of â€œRap to be Repped,â€ a nationwide musical talent hunt competition organized by the Accountability Lab, thrilled the crowd as they performed.

Laurene Kolleh, the only female competitor among the finalists was announced the winner after receiving the highest points from votes by text messages and a three-member panel of judges.

Kolleh said she was excited and at the same time shocked about being the winner among other talented competitors.

She praised her parents, mentors, and friends for supporting and voting for her. Prior to participating in the competition, Kolleh said she had sung in her school and church choirsÂ but had never ventured into secular entertainment before.

With her song â€œWe need change in Liberia,â€ the Rap to be Repped winner said her music was about building the motivation of young people to be peaceful throughout the upcoming elections.

As a young activist, she said her experience in working with young people has taught her how passionate young people are for progress and development.

â€œWe are always seen to be violent, but thatâ€™s not who we are,â€ she said.

â€œI am trying to inform people around the world through my music that [the] youth are not always violent, we are also peaceful.â€

Being the winner of the competition, she said, has grown her motivation to join the young music industry of her country to focus especially in making motivational songs. â€œTo be honest, I have not really been too much into music. I have been in youth advocacy, but I thought to give myself this try and I now believe that I have a talent that I have been pulling back from. So, I have won the courage to sing more,â€ she said.

The competition was held in partnership with the National Elections Commission and the US Embassy in Monrovia.

Accountability Labâ€™s Liberia country representative Lawrence Yealue said a total of 50 young people from across the country auditioned in October last year into the competition and the best five performers made it to the finals. Finalists of the Rap to be Repped competition. Photo: Gbatemah Senah

â€œThis is our country, the best we can do is to help out young kids become superstars and the best they can be,â€ he said.

He said the initiative was intended to keep young people happy and push them away from violence ahead of the October elections.

All songs featured at the grand concert were geared toward promoting peaceful elections, Yealue said. Another competition is expected to be held before the October elections. Panel of judges at the concert. Photo: Gbatemah Senah

Yealue said, in addition to the trophy, the winner of the competition will also benefit from a recording deal and be presented to the Crown Prince of Norway on his planned visit to the country this week.

Editorâ€™s note: The Accountability Lab, is a funder and partner of The Bush Chicken.