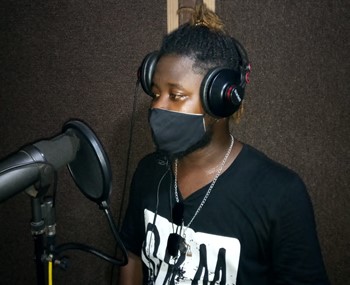 The following article was sponsored by Accountability Lab.

Accountability Lab Liberia has selected the winners of a competition to identify undiscovered youth talents using hip-co music to bring about social change.

With funding from the National Endowment for Democracy, AL Liberia announced and hosted audition exercises in October 2020 for young artists in four of the most populated counties in Liberia: Montserrado, Nimba, Grand Bassa, and Bong.

Named Voice2Rep, short for Voice to Represent, the competition gives rising stars a platform to make their voices heard, connect with socially-conscious leaders in the music industry, and build the skills they need to shape the future of the country through music.

The auditions brought together hundreds of young people eager to learn about conscious music, grow their talents, and use music for community development. The auditions were led by AL Liberia staff, including Didho ‘Beatmaster Xclusive’ Williams and award-winning music producer Zubin Cooper. Independent guest judges with music backgrounds recruited from within each of the counties also helped evaluate the auditions. The winners were selected based on a combination of their artistic ability, lyrics, vocal ability, and the judge’s overall opinion.

AL Liberia made radio appearances, distributed flyers, played jingles, and conducted street publicity activities to raise awareness about the activities. During those awareness activities, the team educated the youth about civic issues and stressed the need to step up and get their voices heard on national issues.

The audition held at the Bassa Youth Caucus Hall in Buchanan saw Terry Robertson, alias Pop Daddy, emerge as the winner after six hours of auditioning. Linda Lloyd, a producer of an educational music show at Radio Gbehzohn, was a guest judge.

In Gbarnga, Radio Gbarnga journalist Susannah S. Reeds and local musician Kelvin A. Tolbert, were guest judges in the process that produced Solomon ‘Rapsode’ Tamba as the winner. At least 24 contestants participated in the audition that was held at the David Kuyon Intellectual Hall.

The Montserrado audition was hosted at the iCampus facility on Carey Street in Central Monrovia. This time, talk show host Rickslyn Myers and music promoter Elliott Saytonneh were guest judges. Oluwa Banks, also known as D-banks, was named the winner.

The winners from the four counties were paired with mentors (Henry Toe in Bong, Alfred Flomo in Nimba, Darius Kumorteh in Grand Bassa, and Tonia A. Reeves in Montserrado) to help them develop their lyrics, vocal training, recording, and stage management skills.

As a result of the process, songs were produced by the winners, including “Kpor-Kpor” by Solomon ‘Rapsode’ Tamba of Bong, “Promises” by Alice ‘Lady Quincy’ Jimmy of Nimba, “Changes” by Terry ‘Pop Daddy’ Robertson of Grand Bassa, and “No Violence” by Oluwa ‘D-Banks’ Bank of Montserrado.

The preceding article was sponsored by Accountability Lab.

Sharing
Tags Accountability Lab
Contributions to The Bush Chicken are not tax deductible.