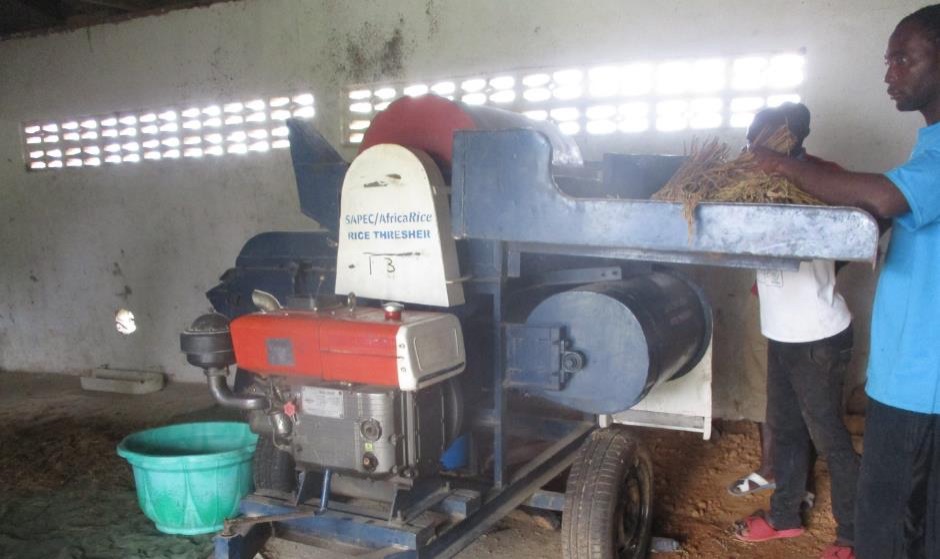 They are the Women Farming Group in Harper, and Toukpeh Farmers Cooperative in the Philadelphia community.

Rogers disclosed in an interview that the organization’s mission to the county was to provide training for the Women Farming Group on the steps to processing rice and increasing production. Meanwhile, members of the Toukpeh Farmers Cooperative will be trained in using a thresher machine provided to them by the government under the SAPEC initiative.

“This thresher will help them enhance the quality of the seed rice to avoid the stone from the rice when using it to better their rice quality,” Rogers

He said training smallholder farmers on using and maintaining the thresher would enhance its sustainability. But he also encouraged the farmers to better organize themselves.

“This thresher’s capacity is two tons per day, so they can work hard for their own benefits” he said.

“If they are well organized, they will use the produce from the thresher to buy their own equipment for self-reliance.”

He stressed the need to increase rice production in order to reduce the importation of rice into the country by focusing on agricultural activities to help the country become self-sufficient.

A smallholder farmer and member of the Philadelphia Farmer Group Cooperative, Ceries Jackson, lavished praise on the international NGO and the SAPEC initiative for the technical and capacity building drive to help them increase rice varieties and production in the county.

Jackson lauded the authorities particularly for the provision of the thresher machine. He also launched an appeal for a mill to help them process their post-harvest yields.

“The previous rice mill was stolen by unscrupulous individuals who brought [a] setback to our production” he revealed.

The chair of the Toukpeh Farmer Cooperative, George Brisboy, said the provision of the thresher machine, followed by the training, are important steps taken by the government and its partners to enhance their production capacities.

He told reporters that farming remains their major source of livelihood and praised the SAPEC project for being a strong partner. He mentioned that through the project, members of the cooperative have been provided with farming tools and capacity building to improve their agricultural skills.

Sharing
Tags AfricaRice, Ministry of Agriculture
Contributions to The Bush Chicken are not tax deductible.

23 hours ago by Gbatemah Senah