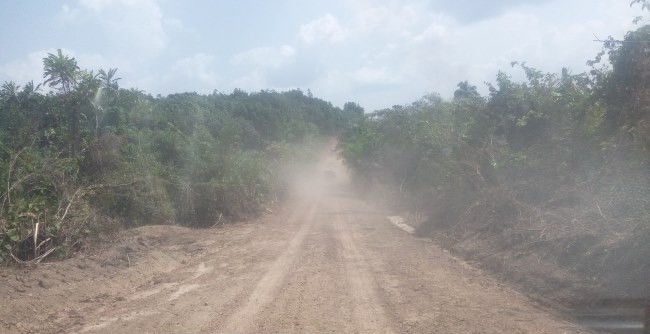 GBARNGA, Bong â€“ Citizens of Kayata in Suakoko Districtâ€™s Kporquelleh Clan lined the main entrance of their town, singing, clapping, and dancing to celebrate the rehabilitation of their road.

They awaited the arrival of their representative, George Mulbah, accompanied by the speaker of the House of Representatives, Emmanuel Nuquay.

Administratively, Kayata is located in Suakoko District, and electorally in Bongâ€™s third district.

The 15 km road, although still unpaved, was rehabilitated for the first time since 1974, through the intervention of Mulbah.

At a well-attended road delegation program recently in Kayata, Mulbah said he promised the citizens during the 2011 elections that he would fix their road if they voted for him.

â€œAs a community, you listened and voted for me,â€ the representative said. â€œEven though it delayed for me to do the road because I was sourcing funding, but thank God that today, you people can have vehicles entering here with ease for the first time.â€

Mulbah said the road reconditioning cost US$19,000 and the Gbarnga-based Engineering Brigade of the Armed Forces of Liberia implemented it.

He encouraged citizens of Kayata to remain united and supportive of his leadership for â€œmore sustainable developmentâ€ in their community.

In appreciation for the road, the chief elder of Kayata, known simply as Chief Yarkpawolo, said the reconditioning of the road has brought relief to their community.

He said pregnant women and sick people can now be taken to Phebe Hospital to access medication, and their locally produced commodities are now easily transported to the market.

He said since 1974 when the road was done, this was the first time for earthmoving equipment to be seen on the road reconditioning it.

â€œWe have collected monies on several occasions to recondition this road, but all those efforts have failed,â€ the chief said. â€œTo see Representative George Mulbah alone fixing our road, we are out of words to appreciate him.â€

Yarkpawolo said since the community initiated a project to build a clinic, it has taken 16 years now and the project cannot be completed due to lack of financial support.

He appealed to Mulbah to help the community complete the project.

Also making remarks in Kayata was the Speaker of the House Emmanuel Nuquay, who cut the ribbon and dedicated the road. He thanked Mulbah for aÂ â€œwonderful community initiative.â€ Nuquay stressed the need for continuity within the legislature in government, a point he has been making recently as dissatisfaction with lawmakers across the country has peaked with calls to boot out all current lawmakers.

The speaker called on citizens to elect Mulbah to the House of Representatives for the third time, promising to complete a clinic in the area if Mulbah is reelected.

Nuquay said development and the effective running of government are ensured when leaders who have the â€œrequisite experienceâ€ in government are maintained.

The newly renovated John F. Bakalu Elementary and Junior High School was also dedicated in Gbarnga following the dedication of the Kayata Road. Unlike the road project, the renovation of the school was a Legislative Earmarked Project, included within the national budget.

The renovation, which cost US$34,000, included reroofing, painting, installation of new doors and windows, among others.