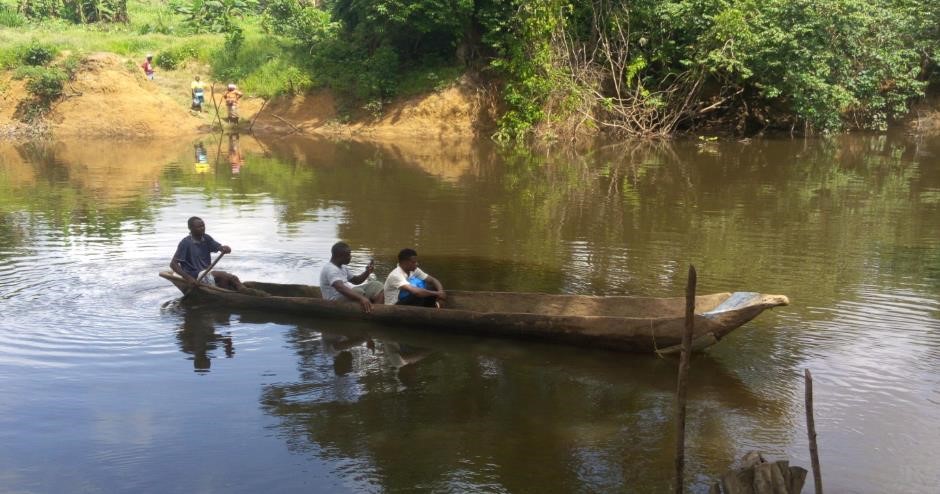 HARBEL, Margibi â€“ Barely a year after the collapse of the Du River Bridge near the Firestone plantation, several commuters have expressed dismay about constraints faced traveling along the route connecting Harbel and Kakata.

The bridge, which collapsed in June of last year, once gave commuters easy access to the Bondiway Magisterial Court and the Firestone Medical Centre. It was also the quickest route from Harbel to Kakata, the countyâ€™s capital.

Now, residents ride canoes on a daily basis from either side of the river to commute across the various divisions of the Firestone plantation. This added hurdle in the commute has increased the cost of traveling, residents say.

Miama Davis, a woman in her early 50s, says she has gone bankrupt due to the high cost of transportation. She spoke to The Bush Chicken as she embarked on a motorbike trip to see her sick husband who has been admitted at the Duside Medical Center.

She said visiting the hospital daily has become a burden for her family, and if her husband is admitted for additional weeks, she might not be able to visit him.

She called on Firestone to provide transportation for the families of employees who were admitted at the hospital to allow them to more easily visit.

Papa John, a fisherman and owner of the canoe that transports commuters across the collapsed bridge, abandoned fishing to provide his services to locals.

â€œWhen the bridge collapsed, I was forced to make available my small canoe to cross our people who regularly use the Du Bridge route,â€ he said. â€œSadly, due to its condition, we had to replace it [with] a bigger one which takes five to six passengers.â€

He said Tilbelrosa Tarponweh, Margibiâ€™s first district representative who was still a candidate, paid to transport the canoe from Marshall, where he fished, to the Du River. During the elections campaign season, John said Tarponweh also underwrote the transportation costs to passengers and also provided eleven safety jackets.

â€œI thought the government of Liberia and Firestone Liberia would have intervened during the dry season in making available a ferry,â€ John said, adding that he is now working to purchase a bigger canoe to fill in that gap. He estimates it will cost him about L$22,000 (US$161).

The Du River Bridge collapsed last year after a truck transporting rocks for the rehabilitation of the Roberts International Airport runway road along. The truck, which has not been removed from the damaged bridge, belongs to a Chinese firm involved in the construction at the airport. Weeks after the collapse of the bridge, Firestone, through a release said they were working with the government and the Chinese company to find a remedy to the situation. It has been a year now and there is no sign of any work beginning.

Jasper Chea, a resident of Bondiway who works as a clerk at the magisterial court in Unification City, said it would have made sense for the rubber plantationâ€™s management to construct a temporary footbridge across the river.

He says he travels every morning across the river and is troubled whenever he sits in a canoe.

Chea added, â€œIt is indeed frustrating that after several engagements with Firestone Liberia, the company seems not embarrassed by the collapse of the bridge.â€

Tarponweh, the representative, recently appeared on a local radio station in Harbel where he disclosed that he had officially informed authorities at the Ministry of Public Works of the status of the bridge. However, he fell short of saying if and when any construction would begin.