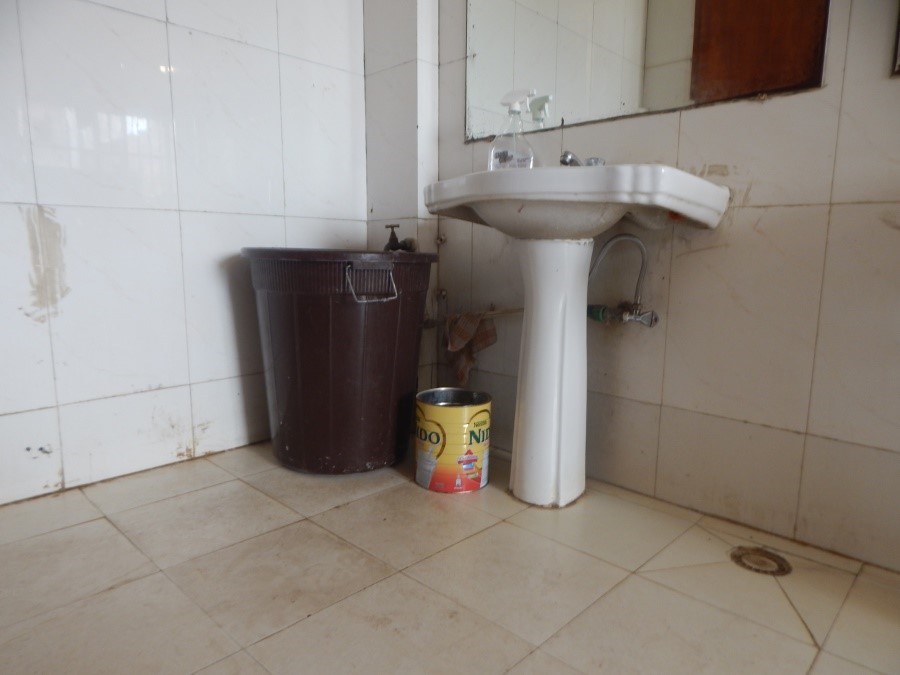 MONROVIA, Montserrado – Liberia’s Ebola epidemic killed 4,816 people in a crisis that highlighted not only the country’s poor healthcare system but also pushed discussions around proper hygiene to the forefront of Liberian society.

However, despite the awareness raised by the epidemic around maintaining proper WASH facilities, a Bush Chicken investigation has found that major health facilities within Monrovia have not prioritized proper hygiene.

At the Ministry of Health’s central office in Congo Town, where one would expect well maintained WASH facilities, toilets cannot be flushed because of low water pressure or the lack of water, leading many bathroom users to leave feces in the toilet bowl after use.

In some instances, barrels are placed in bathrooms for use in flushing toilets, but putting aside the unsanitary nature of that method, they did not always contain water. A typical sight of unflushed toilets in the ministry’s restrooms. Photo: Zeze Ballah

Moreover, several days of observation revealed that each of the first, second, and third floors were allocated only one roll of toilet tissue per day. This meant that by noon, the workers in the 23 offices per floor had usually already used it all up.

In the first floor male bathroom, there was evidence that men had used paper to clean themselves due to the lack of toilet tissues.

A cleaner at the ministry, who would only speak anonymously for fear of retribution, confirmed that only one tissue is issued to a floor per day.

“When the tissue is finished, staff of the ministry and visitors use different kinds of papers in the restrooms,” the cleaning staff said.

A female staff of the ministry, who also spoke anonymously, said she took her own tissue to the restroom every time.

Besides tissue, the bathrooms also frequently lacked soap, and over the course of several days of observations, individuals using the male restroom frequently shunned washing their hands.

There were strong odors of feces and urine throughout the bathroom. In fact, males using the urinals were seen hold their heads up high because of the stench.

Besides the unsanitary conditions in the restrooms, at the entrance of one set of lavatories was a large garbage pile that was left in place for several days. A pile of trash at the entrance of the male and female toilet at the Health Ministry. Photo: Zeze Ballah

The unsanitary conditions also spilled over to the Redemption Hospital, located in New Kru Town. The hospital has separate restrooms for staff, and most of the staff restrooms are kept locked. Those available to visitors are poorly maintained.

Running water from the damaged faucets was discovered pouring on the floor of the male restroom available to visitors. There was no soap or toilet tissue. In fact, the conditions of the bathroom were so bad that men often went to the back of the hospital to urinate.

The sanitation problems permeated outside the restrooms. Baby diapers deposited by mothers from the pediatric ward were discovered lying in stagnant water with flies sitting on them.

Some patients and their visitors were also seen sitting and eating not too far from the pile of garbage that contained huge babies pampers. At the back of the hospital compound, waste contained in black, yellow, and white plastic bags were discovered in piles. They were kept there for several days, drawing a large number of flies. Between the hospital’s kitchen and outpatient department lies stagnant water that contains green moisture which is a breeding ground for mosquitos.

One of the hospital’s doctors, who spoke anonymously, said the hospital’s unsanitary conditions persist even though there are seven cleaners at the facility. The doctor added that they often resolved to sweeping their office and cleaning the staff restroom because the cleaning staff members are not doing their job.

The improper sanitation practices are concerning because such practices in public facilities that see a large number of visitors can contribute to spreading diseases such as cholera, Hepatitis A, typhoid, and diarrhea.

A 2017 article published in the Bulletin of the World Health Organization noted that only 45 percent of health facilities surveyed in 2015 had an “improved water source.” Additionally, only 27 percent of facilities “had proper disposal for infectious waste.”

The article connected the lack of proper sanitation and basic infection prevention tactics to the increased mortality rate of the Ebola virus.

“The shortage of personal protective equipment and soap and lack of compliance with basic infection prevention and control measures – such as limited screening of patients, poor isolation facilities and training of health-care workers – contributed to 372 health workers acquiring Ebola virus disease, of whom 184 died,” the report noted. Sorbor George, director of communications at the Ministry of Health. Photo: Zeze Ballah

Contrary to photographic evidence, George said “toiletries and towels are regularly placed in the restrooms,” adding that the cleaning staff was effective in their duty.

“Our restrooms are kept very clean to the extent that anyone using them can lie on the floor with a white coat suit,” he said repeatedly.

George also denied that only one roll of tissue is provided each day in each bathroom.

“I do not think what you are saying is true, it is totally and wholly a fabrication,” he said.

Invited to visit the restrooms along with a Bush Chicken reporter to authenticate our findings, the communications director declined.

Asked about the lack of sufficient water to flush toilets, George said the ministry receives water from the Liberia Water Sewer Corporation and supplements the supply with water fetched by the cleaning staff from surrounding communities.

Regarding Redemption Hospital, George declined to comment “until I can confirm what The Bush Chicken has found out.”

Sharing
Tags Ministry of Health, Sorbor George
Contributions to The Bush Chicken are not tax deductible.