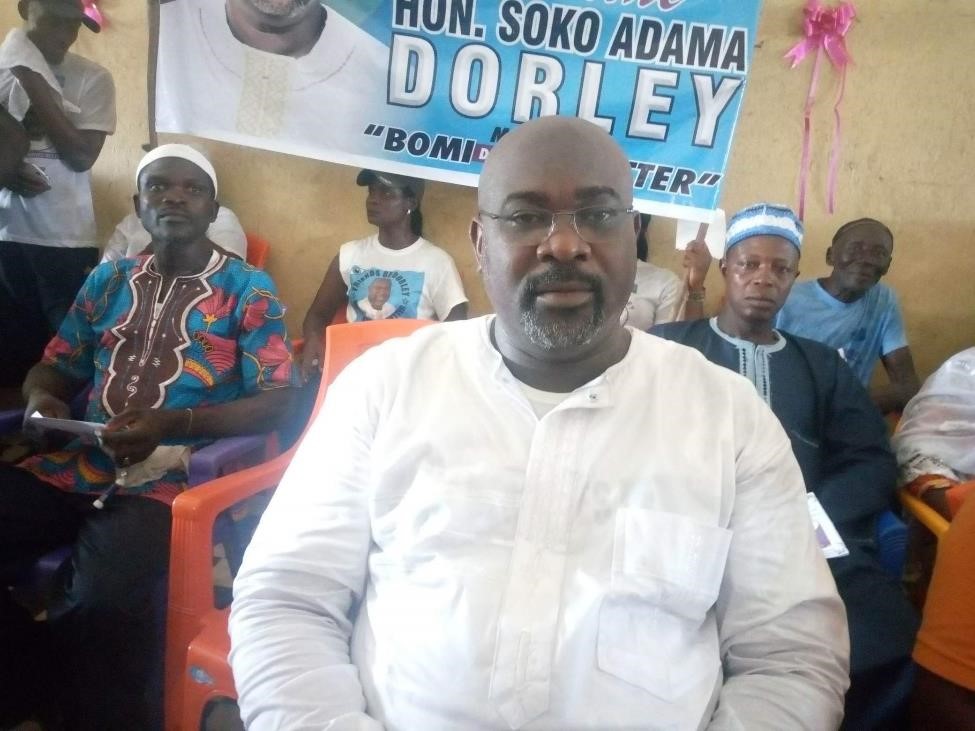 TUBMANBURG, Bomi â€“ Just a day after he was petitioned by Bomi residents to contest in the upcoming senatorial election, Adama Soko Dorley has begun distributing medical supplies to about 25 clinics in the county. The supplies included gloves, masks, and different types of drugs.

Dorley called the donation important, especially since the country had now confirmed cases of the Coronavirus.

Distribution of the supplies began on March 17 in Dowien District, where Dorley estimated that the materials cost L$1.1 million (US$5,556).

â€œWith the difficulties faced by [the] government to adequately supply medical materials, I understand the challenges my people are going through just to get medication,â€ he said. â€œThis is my own way of buttressing [the] governmentâ€™s efforts, mainly when we are fighting to contain the Coronavirus disease outbreak.â€

On March 16, Dorley committed himself to investing in the countyâ€™s health sector at an elaborate petitioning program meant to register his interest in the upcoming elections. There, several chiefs, elders, and youth affixed their signatures to a document of support for Dorleyâ€™s candidacy.

A student of the Sime Darby High School, Massa Sonii, read the petition. She attributed the lack of progress in the county to â€œvisionless leadersâ€ who leave citizens in abject poverty, with deplorable school and health systems, while they enrich themselves.

â€œBomi County can never get developed as long as we continue to make the same mistake, by electing people that have failed us in the past, and caused our citizens to live in poverty,â€ Sonii read, noting that Dorley was best suited to represent the county in the Senate.

The likes of Lahai Gbabye Lansana, incumbent Senator Sando Johnson, Zobong Norman, Ousman Dukuly, and former House Speaker Alex Tyler have also hinted at their interest in the countyâ€™s seat, setting off a potentially intense political thunderstorm that will end only after Oct. 2020.

Meanwhile, on the same day Dorley was petitioned, the head of the publicity and mobilization team for rival senatorial aspirant Ousman Dukuly pledged his support for Dorley, along with other members of Dukulyâ€™s campaign. Aphonso Sherman announced at a press conference that he realized that Dorley is the only person who can properly represent the interest of the county in the Senate.

Emphasizing that he was not financially induced to pledge over his support, Sherman said he was moved after seeing the numerous initiatives of Dorley and hearing of his vision to transform the county.

â€œI have seen the light,â€ he said. â€œI have as well realized that Adama Soko Dorley is the best alternative for our county.â€

In early March, Dorley donated supplies to dozens of schools across Bomi. At that time, the senatorial aspirant was still at his home in the U.S. He traveled to Bomi to partake in the petitioning program and has already returned to the U.S.

Sharing
Tags Adama Dorley
Contributions to The Bush Chicken are not tax deductible.