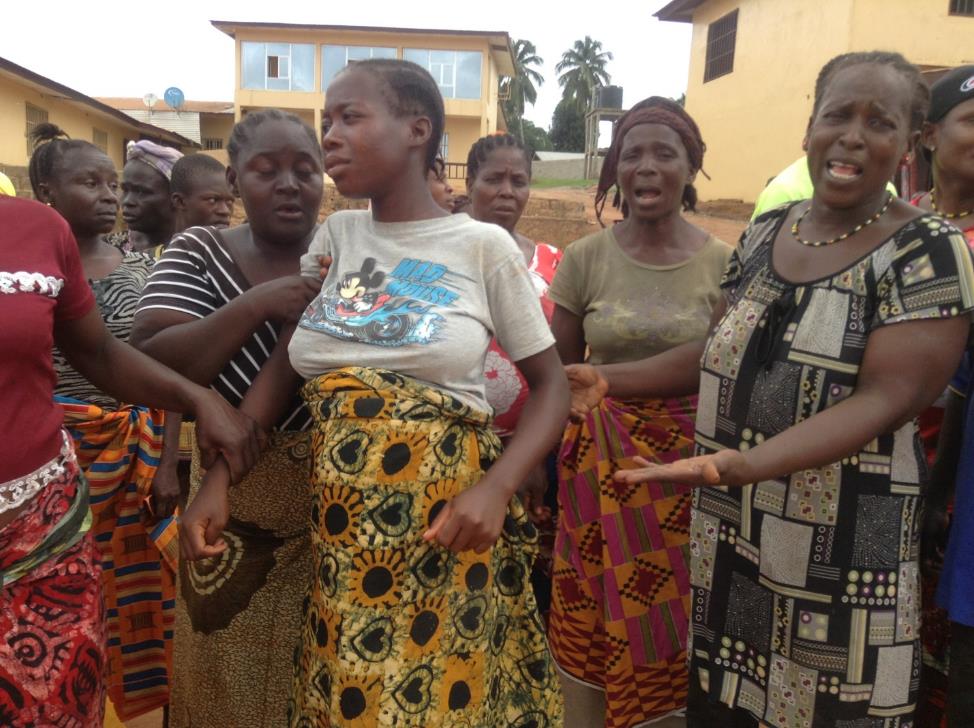 WAINSUE, Bong â€“ The executive officer of the 23rd Infantry Brigade at Camp Schieffelin, Captain Francis Gbodi, has apologized to citizens of Wainsue for what he said was brutality meted against them by members of the Armed Forces of Liberia on Saturday.

There had been a standoff between Wainsue residents and members of the Engineering Company of the AFL assigned at the Camp Tubman Military Barracks in Gbarnga, a few miles away from Wainsue.

According to eyewitnesses, the commotion started on Friday when a female AFL officer, who was not uniformed, visited the town and had a misunderstanding with a resident named Lincoln Namakpeah.

Following the tussle between the officer and Namakpeah, the officer reportedly made a phone call to the barracks and other AFL soldiers who were also not uniformed immediately went to the town in a military vehicle and beat a few people.

On Saturday morning, the AFL soldiers again went to Wainsue, this time around, they were wearing the official military attire, residents say.

The residents told a fact-finding team comprising of AFL officials and leaders of Bong on Sunday that the soldiers assaulted them and then took them to the police station in Gbarnga.

The victims of the soldiersâ€™ actions said they lost several valuables, including goods, cash, and mobile phones, during the standoff with the soldiers.

At the fact-finding meeting, Gbodi said it was wrong for the military personnel to have gone to the town to assault peaceful citizens, even if one of them was offended.

â€œWe came here and brutalized yâ€™all,â€ Gbodi told the citizens. â€œWe are wrong for what we did, and that was the reason we came here today to find out what happened.â€

â€œOne thing I know about the military, we donâ€™t leave any stone unturned. We are going to investigate this thing to the letter,â€ he continued, adding that he would make an â€œofficial statementâ€ to the Ministry of National Defense, informing the minister and other senior officials of the situation in Wainsue in order to ensure speedy investigation. Also in attendance at the meeting was Rep. George S. Mulbah of Bongâ€™s third electoral district and chairperson on the House Committee on National Defense. Wainsue is also coincidentally located in Mulbahâ€™s district.

Mulbah said it was â€œunthinkableâ€ that the soldiers, on whom the government had spent huge amounts of money training, would behave in such a way.

He said as Liberia is going through a crucial electoral process, citizens depend on the military and other security institutions to keep peace in the country. The actions of those AFL personnel, he said, does not send a good message of a well-trained and respected army.

â€œWe spent enough money on this army to be trained; this is one of the best armies Liberia has ever produced. And now you have elements of the soldiers coming here, taking batons and running from house to house beating on people like rebels â€“ this is a serious concern,â€ Mulbah noted. He said the reported AFL soldier who had the misunderstanding with the citizen in Wainsue should have taken her case to the police instead of calling other soldiers to â€œterrorizeâ€ peaceful citizens.

â€œI will take this case very serious with the Ministry of Defense and make sure the people get redress and their lost properties are paid for,â€ Mulbah concluded.

Meanwhile, the superintendent of Bong, Selena Polson Mappy, described the actions of the soldiers as â€œunacceptable.â€

â€œWe should be building bridges; we should be mending the broken pieces; we should not be scattering them, especially in this period we find ourselves as a country where our governance system is to soon experience transition,â€ Mappy told the gathering. She said the citizens depend on the security for the transition and peace of the country. Mappy said it was â€œquite unfortunateâ€ that a pregnant woman was hurt, along with another child, during the assault by AFL personnel.

She apologized to the citizens, especially the victims, and further challenged them, to be honest in reporting the materials and funds they claimed were missing during the standoff.

One of the victims of the AFL personnelâ€™s attack, Changes Mensah, told The Bush Chicken on Saturday that he knew nothing about the conflict that resulted in the commotion.

â€œI was coming from the creek where I had gone to wash my clothes when the soldiers attacked and beat on me. They damaged my Tecno C8 phone and my earpiece,â€ Mensah said.

He was later taken to the Phebe Hospital for medical treatment along with some other victims.

Another victim, Annie Lablah, who is eight months pregnant, was also beaten on Saturday, according to eyewitnesses and her own account.

She was rushed to the C. B. Dunbar Maternal Hospital in Gbarnga for medical attention.

â€œOne of the soldiers hit me and I dropped, my tube I was carrying fell and spoiled, I am feeling pains,â€ Lablah said on her way to the hospital Saturday.

In light of the assault by the AFL soldiers, some citizens of Wainsue, predominantly young men, set up roadblocks on Saturday, burning tires on the main road. They said their action was meant to â€œcall governmentâ€™s attention to their plightâ€ and launch a speedy investigation into the actions of the AFL soldiers.

For several hours, normal traffic was paralyzed as vehicles from either side of the road were stuck. Passengers were seen appealing to the angry youth to grant them access to the road for several hours.

The leadership of the AFL at the Camp Tubman Military Barracks; the Bong County Police Detachment; and Bongâ€™s assistant superintendent for development, Anthony Sheriff, later intervened to quiet the rampaging youth.

The young people agreed and removed the roadblocks to enable the free flow of traffic. This is not the first time for members of the Engineering Company of the Armed Forces of Liberia assigned in Gbarnga to engage in a standoff with civilians.

Three years ago, a soldier stabbed a motorcyclist, resulting in a riot in Gbarnga. Additionally, plainclothes AFL soldiers often get into tussles with residents at entertainment centers during night hours.