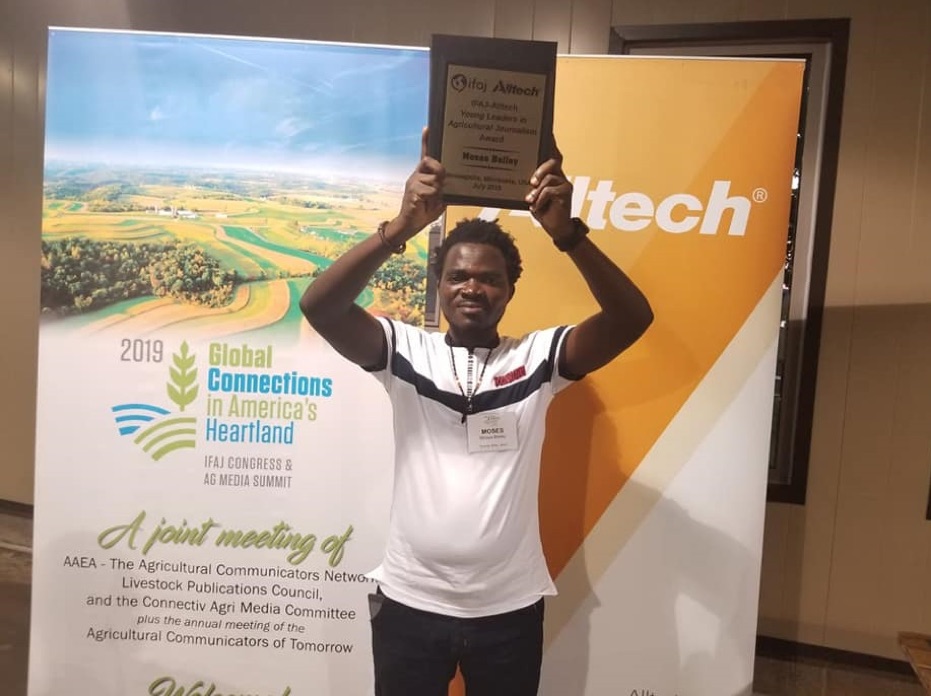 MONROVIA, Montserrado â€“ Moses Bailey, a journalist with The Bush Chicken and Radio Gbarnga who recently received the 2019 IFAJ/Alltech Young Leaders in Agricultural Journalism Award, is calling on Liberia to double its investment in agriculture.

Bailey, who is also partnership manager for the Liberia Agricultural Journalists Network, said he dedicates his award to all Liberians as a wakeup call to get more involved in agriculture in order to lift the country out of poverty and food insecurity.

He received the award along with nine other young journalists on Saturday night at the International Federation of Agricultural Journalists’ 2019 Congress held in Minneapolis, Minnesota, U.S.

The IFAJ Young Leaders Award was established in 2006 by IFAJ and Alltech to recognize emerging leaders in agricultural journalism and communications from around the world.

Bailey was nominated for the award earlier this year through the Liberia Agricultural Journalists Network, the IFAJâ€™s guild in Liberia that is working with journalists to report on agriculture and help farmers with extension information.

â€œWe dedicate this award to the people of Liberia as a symbol of motivation to invest in the soil more than we have ever done. Our land is fertile and has the ultimate potential of lifting us out of poverty, only, if we make the best use of it,â€ he said.

He hailed the coordinator of the Liberia Agricultural Journalists Network, Jefferson Massah, for nominating him for the awards this year.

Massah, a media developer, attended the master class of the IFAJ in the Netherlands in 2018. His participation at the event gave rise to the full recognition of the Liberia Agricultural Journalists Network by the IFAJ as a member organization.

Massah also attended the recent IFAJ Congress in Minnesota as an executive member of the organizationâ€™s strategy development planning committee.

He wants Liberian journalists and media institutions begin to place more attention to promoting agriculture and educating the public about food security and the economic benefits of agriculture to the nation.

As for Bailey, he said the training with IFAJ has further inspired him to pursue more stories around agriculture development in Liberia, particularly issues on smallholder farmers.