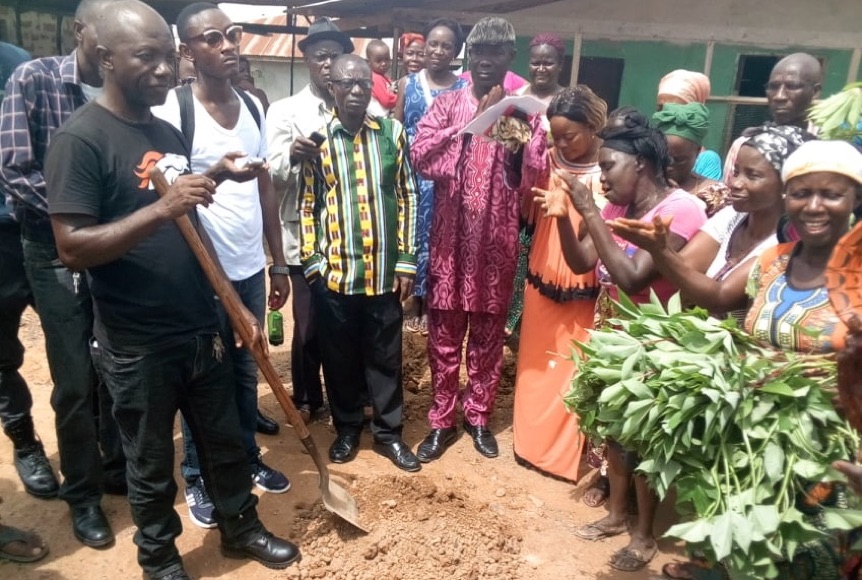 The ceremony took place over the weekend in Wayzohn, in Grand Bassaâ€™s fourth district, in the presence of marketers, local authorities, and representatives from the Ministry of Agriculture.

Serving as a proxy for Agriculture Minister Mogana Flomo, the county agriculture coordinator for Grand Bassa, Joyce Korvah, thanked the marketers for making available four acres of land for the project.

â€œIf there was no land, we were coming to take the market on the highway,â€ she said. â€œMaybe the project was not going to stay here, and I will appreciate that Liberians think forward like this â€“ now you have a modern market.â€

She pledged the ministryâ€™s support to the marketers and farmers across the country, adding that the Liberian government would do everything possible to support its people to empower them and improve food security.

The focus person for SAPEC, Joshua Flamah, said the construction would last for eight months, beginning May 16, 2019. He noted that, as agreed by the community, existing market structures on the land will be demolished to enable the US$487,716 construction to take place.

â€œThe government of Liberia got the money from international partners including the African Development Bank and the Global Agriculture and Food Security Program since 2012 to 2014,â€ Flamah noted. â€œThe old government started the work and the new government met it, so your government decided to build for you a modern market. You donâ€™t have to carry goods home and there will also be [a] playground.â€

Flamah said the construction of the market would help make it easier for farmers to sell their goods and, as a result, increase their incomes.

The superintendent of the Liberia Marketing Association in Wayzohn, Mary Peters, thanked the government and its partners for the project and pledged the support of the marketing association.

The Liberian-owned JEAMCCO Construction Company has been hired to work on the structure. The market building is expected to have offices upstairs for the marketing association, a latrine, a playground, and internal plumbing. The structure will also have electricity and be contained within a fence.

SAPEC is a project funded by the African Development Bank, the Global Agriculture and Food Security Program, and the Liberia government. Its intent is to build smallholder farmer capacity and increase food security, crop specification, and institutional strengthening.