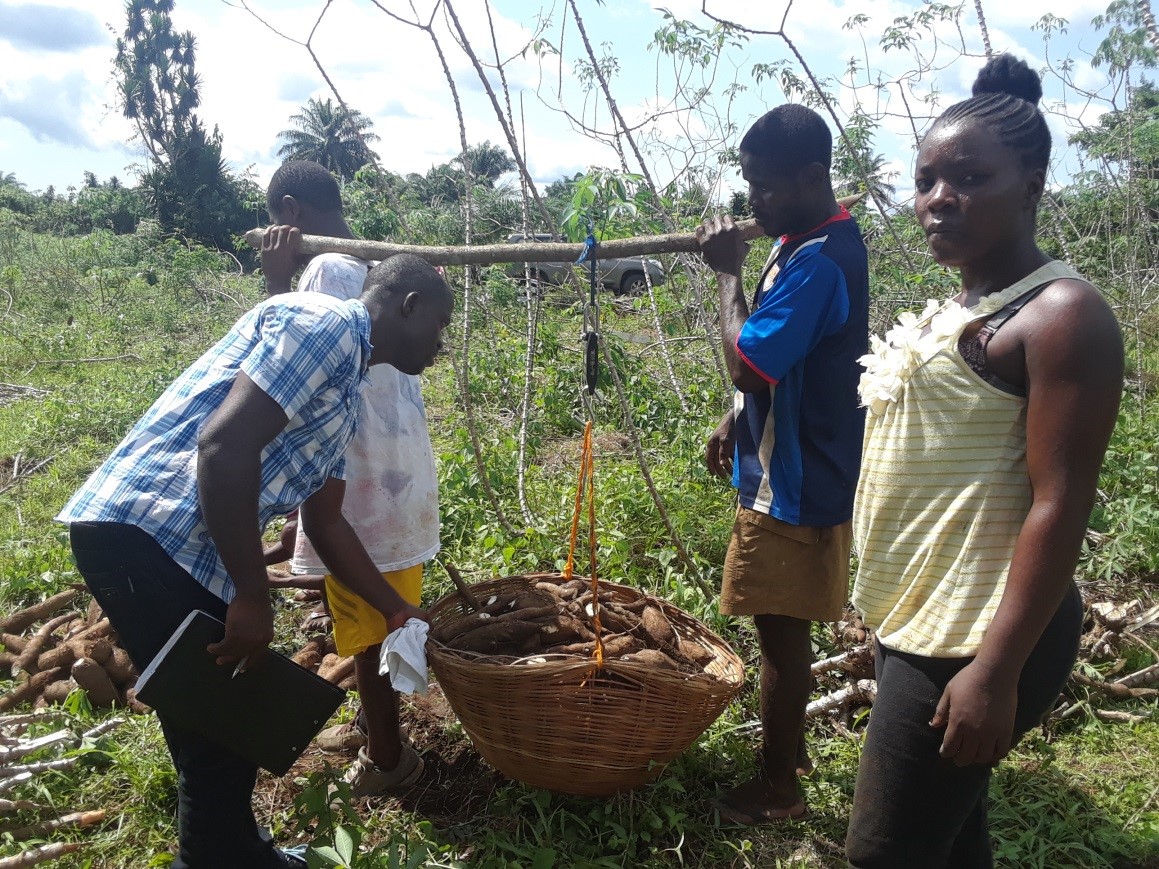 CAREYBURG, Montserrado â€“ The Ministry of Agriculture has trained over 500 farmers and equipped them with agricultural inputs to increase production and productivity especially in Cassava value chain.

It has done so through the Smallholder Agricultural Productivity Enhancement and Commercialization project, an initiative funded by the Global Agricultural Food Program and the African Development Bank, and implemented by the International Institute for Tropical Agriculture.

The SAPEC focal person in Montserrado, Nathaniel Johnson, said the project is working with 590 farmers and three cooperatives engaged in cassava farming.

During a harvest at the SAPEC cassava demonstration farm in Careysburg Districtâ€™s Frank Town, Johnson said the farmers were trained in practices that will help them increase their yield to improve the commercial viability of their farms. Those practices include using ridges and mounds instead of the traditional flat method of planting.

The International Institute for Tropical Agricultureâ€™s cassava extension agronomist, Michael Edet, said IITA, as one of the implementing partners of SAPEC, is introducing new high yielding, disease and pest-resistant varieties of cassava to improve the farmersâ€™ harvest. Edet said the different varieties of cassava given to the farmers have great economic values from the leaves to the stems and roots, which have over 50 uses.

The project also went beyond production, training over 500 processors across the country to produce fufu powder, cassava bread, and other products for sale on the Liberian market.

Wasiu Awoyale, IITAâ€™s postharvest specialist, said six cassava processing centers had been built in several counties including Duazon, Margibi; Gangama, Grand Cape Mount; Tubmanburg, Bomi; the Central Agriculture Research Institute in Gbarnga, Bong; Compound 3 in Grand Bassa; and Bensonville in Montserrado. He said those factories would help create access to market for the farmers. Each of the factories can process to up 20 tons of cassava daily.

Farmers can now enjoy all year-round income from cassava sales as Liberiaâ€™s climate favors the production of cassava throughout the year, Awoyale said.

â€œDue to the growing demand, the farmers might not be able to meet the supply of cassava roots in the next two years,â€ he added.

Meanwhile, David Kolleh, the acting head of the Central Agriculture Research Institute, called on the government to provide the necessary support to allow CARI to continue to provide technical support to the farmers in the absence of donor-supported projects.

He said Liberia has a great potential to grow roots and tubers, but CARI currently lacks the infrastructure to be effective.

Garsuwa Golley, a local town chief and a cassava farmer who benefited from SAPEC, applauded the project for giving them meaningful skills to improve their methods of farming.

â€œAlthough the new methods involve a little more hard work, but now I know how to plant the cassava in a special way to be able to germinate well,â€ he said.