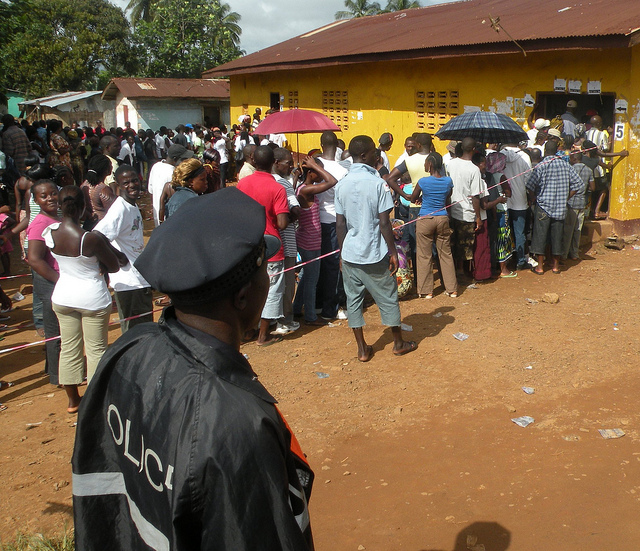 MONROVIA, Montserrado â€“ With little over a month to the October presidential and legislative elections, a local media group says the number of undecided voters in the country has sharply increased.

In its third survey report, the Liberia Holding Consortium disclosed that 13 percent of voters are still undecided on who to cast their ballots for on October 10. The survey was conducted between July 22 and August 5, before the first major debate was held.

According to the group, the survey targeted a manually arranged random sampling of 750 respondents. It was designed to account for a variety of issues, and included urban and rural areas, according to the reportâ€™s authors.

â€œWorking with Liberiaâ€™s population of 4.7 million, a confidence level of 95 and a sample size of 750, we worked with a margin of error of five percent,â€ the report disclosed.

While the number of undecided voters remains high, results showed that Vice President Joseph Boakai maintained his lead ahead of other presidential candidates with 33.8 percent of the samples, although this was less than what he received in the groupâ€™s previous survey â€“ 36.4 percent.

George Weah of the Coalition for Democratic Change is next, with 21.1 percent, up from 18.4 percent in June.

Liberty Partyâ€™s Charles Brumskine received 12.4 percent, which is a reduction from the 13.2 percent shown in June. Other candidates listed significantly are: Alexander Cummings with 5.6 percent, Mills Jones with 3.0 percent, Benoni Urey with 2.5 percent, and Sen. Prince Johnson, with 2.9 percent, gathered solely in Nimba.

According to the pollsters, in Montserrado, the samples generally covered Monrovia and its immediate environs, broken down into seven-broad residential or geographic districts. Nimba considered Sanniquellie, Ganta, Saclepia and Tappita, while samples in Lofa were collected from Kolahun, Zorzor, Voinjama and Foya. Grand Bassa covers LAC Plantation, Buchanan and Compound One and their surroundings.

They also indicated that Bong was surveyed from two broad locations â€“ Gbarnga area and Totota or Salala belt; while Margibi considered Kakata and Harbel.

â€œA lot more [urban communities] were taken, given the further fact that 50.5 percent of the population is urban-based,â€ the pollsters disclosed.

Among other things, critics of the polls have indicated that the survey did not specify the number of centers the survey was conducted in each of the targeted counties.

It is also unusual that undecided voters will continue to increase as the day of the elections approaches. The opposite usually occurs, as voters feel more pressure to make a decision combined with campaigns releasing more information about their plans.

However, the principal of Liberia Holding Consortium, Abdullai Kamara, attributed the increase in the percentage of undecided voters to the increase in coverage areas, as compared to previous polls. According to him, as the elections draw closer, votersâ€™ perceptions about candidates are continuing to change based on the different issues being projected.

â€œAs much as possible, we attempted to ensure respondents as a proportion to the number of registered voters from the last electoral exercise. However, it is generally accepted as the disparity is not so wide as to disrupt the results,â€ the pollsters indicated.