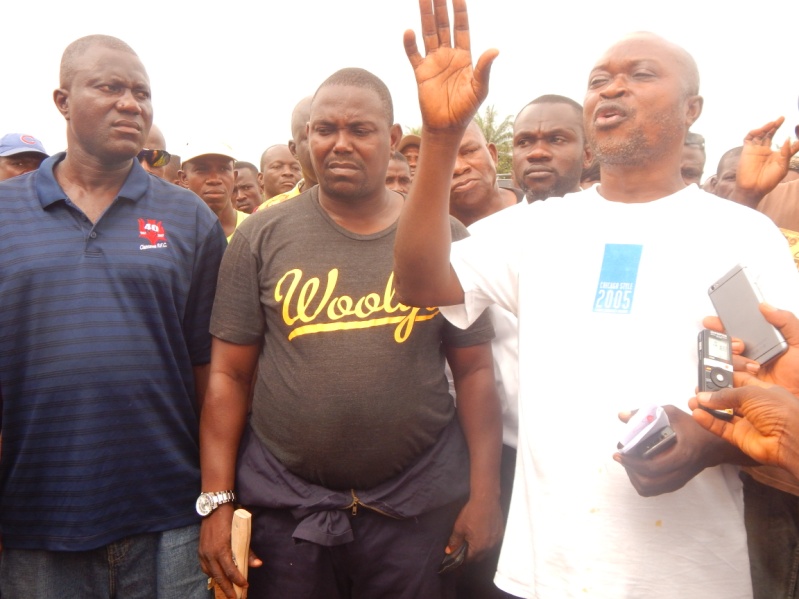 GOMPA, Nimba â€“ The relationship between the Gompa City Corporation and the Friends of Samuel Brown Network in Liberia has soured after the group has accused the city of refusing to accept its proposal to build a city hall and a clinic on public land.

The political group and the city have enjoyed a mutually beneficial partnership over the past six months since it sprouted. In October 2016, the group partnered with the city to launch a massive cleanup campaign to give the city a facelift. The network also buttressed the efforts of the city government to remove garbage from the city over a one-month period.

Notwithstanding, it appears that the two institutions now have a strained relationship. Early this week, Gompaâ€™s Mayor Benjamin Dokpa held a press conference and refuted allegations from the group that he was denying their continued development of the city.

â€œWe listened to media institutions where a senior member of this network was able to falsify or to say something that does not correspond to the letter that we wrote him,â€ Dokpa said. â€œTo tell the people of Gompa City that we have refused to give them land to construct two major buildings â€” in no direction it was seen that we did not want to provide them land.â€ According to Dokpa, on Jan. 10, 2017, the city received a written communication from the political group requesting eight acres of land to construct a multipurpose city hall and a public clinic.

â€œThey wrote us that they wanted to construct a city hallâ€¦ and also a medical center and our response were clear,â€ he said. The mayor said he had also received letters from other organizations requesting land for buildings within the city. He said all the organizations were scheduled for a meeting at his office. Items donated for the cleaning exercise by the Network. Photo: Arrington Ballah

Dokpa said since the request was made, the group had not made available the information and its members were going to radio stations to accuse the city government of refusing to grant them space for their development.

He added, â€œWe want this information so that we can be able to make an informed decision on how we can grant them the land.â€

In reaction to Dokpaâ€™s press conference, the groupâ€™s national chairperson on development, Boris Barlea, said his group was left out of a meeting held by the mayor, which should have allowed them to present their blueprints. He said his organization had requested a rescheduling of the meeting due to other engagements in Monrovia.

â€œThe clarity we want to provide here is thatâ€¦ we asked the city mayor to reschedule the meeting because our executives [were] traveling to Monrovia for some national engagement,â€ Barlea said. â€œThe mayor rescheduled the meeting for March 15 â€¦ and I confronted him that it was a holiday and he said that was no problem because the City Council members were all here.â€

Barlea added, â€œContrary to that, on Wednesday morning [March 15] we met the city mayor in person and asked about the meeting and he said the day was a holiday, and that it was not possible to hold the meeting. Therefore, the meeting was postponed to the next day, and he [Dokpa] was not sure that we would be on the agenda.â€

Because Dokpa serves as secretary to the council, Barlea said he is responsible for drafting the agenda for the council meetings, therefore, his uncertainty about whether the political groupâ€™s presentation was included within the agenda was disingenuous.

Barlea said his group has a blueprint to build a city hall that can accommodate 5,000-6,000 persons.