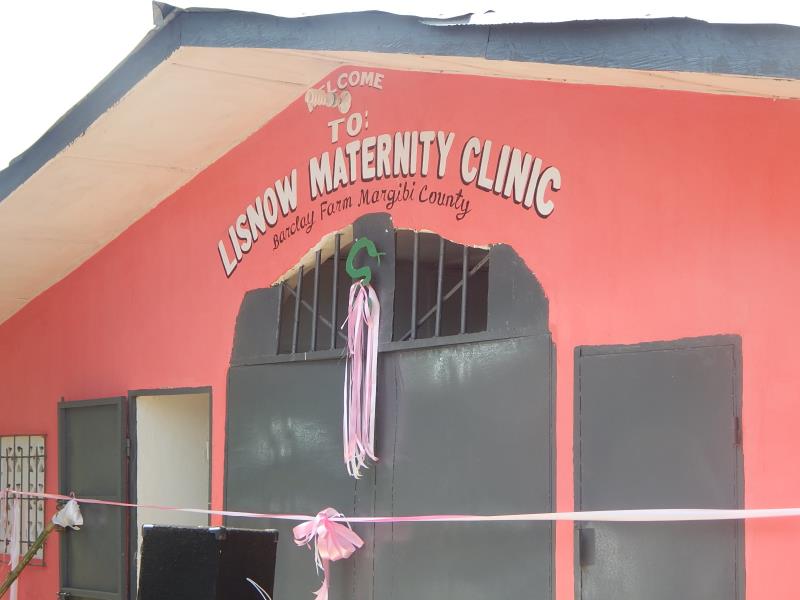 HARBEL, Margibi â€“ In the small community of Barclay Farm on the outskirts of Firestone, a new maternity clinic has been declared open. The Lisnow Maternity Clinic formally opened for operations on April 30th during a festive ceremony attended by community members, most of whom are retirees of the Firestone Rubber Company.

The clinic is privately owned by Ellen Jones, a retired professional midwife from Firestone. It was named in honor of Harmon Lisnow, a former Peace Corps member and board member of the Friends of Liberia, a non-profit organization based in the United States.

Lisnow, along with FOL, provided major sponsorship to the clinicâ€™s construction.

He was among the first group of Peace Corps members who came to Liberia between 1960 and 1962. It was in the classroom as a teacher in Salayea, Lofa County, where he first met Willie Jones, the husband of Ellen Jones. Lisnow said Jones was among the brightest students in fourth grade in 1962. Ellen was also a student at the Salayea School at the time.

When he officially cut the ribbon and declared the clinic opened, Lisnow praised the Jones for being committed to their dream. He expressed happiness over the achievement of his former students. He added during a Bush Chicken interview that it was incredible to see a health facility being opened in a community that is really in need.

â€œIâ€™m just amazed and humbled that I had an opportunity to participate in this initiative,â€ he noted.

He said his support for the project was driven by the incredible efforts of the Jones.

Lisnow hopes the Jonesâ€™ dream to help the people of communities in Margibi by will grow even beyond the clinic.

â€œI want to see this successful, we talked about building a school attached to it, and I just want to see it growing. Itâ€™s not only the clinic that helps women who get pregnant but look at the jobs it creates. Itâ€™s a business and Liberia needs small business people not just big corporations that take things out of the country,â€ he said.

He wants other Liberians to use the story of Ellen Jones as motivation to always pursue their dreams. According to him, Ellen was just 12 years old when she had her first baby. She was still in school but remained steady in what she wanted to achieve.

Meanwhile, the clinic will begin active service this weekend.

Ellen Jones called on the government of Liberia and aid organizations to help provide the clinic with necessary drugs, equipment, and medications.

She said that although the clinic will begin operations with available equipment and drugs, there was still a need for interventions. She said her motivation to construct the clinic in Barclay Farm was propelled by the story of a pregnant woman in the area who died because she could not afford the cost of seeking treatment at a hospital.

â€œI met a lady who was in labor pain for two days but died upon arrival at the C.H. Rennie Hospital in Kakata because she did not have money to go to a nearby hospital for treatment,â€ she said.

At the moment, she said the clinic would be operating with seven staff on a 24-hour service. However, she adds, the number would increase with an influx of patients.

She thanked Lisnow, her son-in-law James Mulbah, and her family for supporting her dream of opening a maternity clinic.