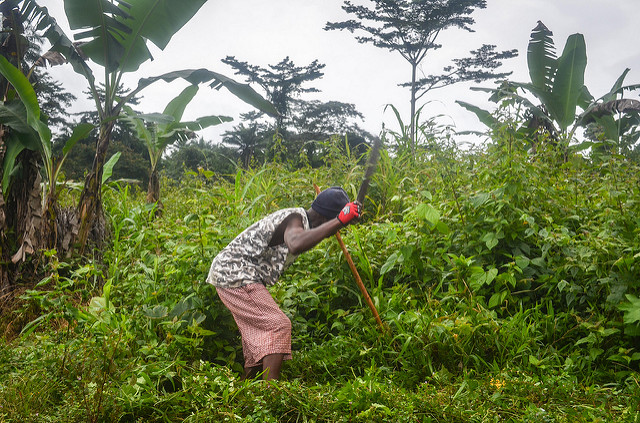 MONROVIA, Montserrado â€“ Agnes Gardia, a farmer in Montserrado, believes that existing laws on land ownership put farmers at a disadvantage because they have no regard for community ownership of land.

â€œRecently, while carrying out my farming works, the land I am gardening on was sold to another person by a member of a family claiming ownership. The new owner has asked me to remove my crops because he is ready to carry out his construction works,â€ she said. â€œWhere then do I go, and how possible is it to relocate my crops when itâ€™s not even ready for harvest?â€

Ruth Suah, a town chief of the Suakoko Clan in Bong, said land and boundary disputes have continued to be a major problem among the locals.

Suah said issues surrounding disputes over land ownership account for more than half of cases resolved by local leaders. Because of the uncertainty in current laws on land ownership, she said, towns and villages are growing in conflict with one another.

She wants the government to act fast in reforming the laws, especially reconciling customary and statutory laws on land and encouraging community land ownership.

Just over two years since the proposed bill was submitted to the Legislature for passage into law, the Liberian Land Rights Act has continued to linger before the House of Representatives.

Amid a review of the countryâ€™s land rights and tenure status, the former Land Commission, now known as the Liberia Land Authority, in December 2014 developed and submitted a revised and updated Land Rights Act to the Representatives.

The proposed act recognizes the ownership of customary land, a complex system of land rights and principles, including the right to possess and use land and all natural resources thereon.

Citizens, civil society actors and international organizations believe the act will contribute to the consolidation of peace and democracy. Their view is that the instrument will also provide opportunities for economic growth with protection for investors to create businesses in the country.

Farmers, especially, are expected to benefit from the Land Rights Act and as they should be able to increase their production to feed the growing population.

Land Rights for Liberia, a project funded by the European Union, was launched on Tuesday in Monrovia.

The project is comprised of different components that would be implemented by partners, including the Sustainable Development, Welt Hunger Hilfe, and the Catholic Agency for Overseas Development.

The package of the project would include advocacy on the passage of the Land Right Act and its implementation upon passage, awareness and outreach on community land rights, capacity-building for civil society organizations to successfully become involved in land rights issues, support to communities in self-identification, land claim declarations, and community mapping, land use and management plan, knowledge sharing and networking and legal support to communities on land issues.

Alberto Menghini, EU-Liberia Delegation Head of Cooperation, said the EU was proud to support the project because land rights are crucial for development.

While the issues surrounding land ownership are not unique to Liberia, Menghini said, they are currently severe in the country.

â€œWe recognize that there has been a lot of activities, a lot of discussions and consultations since 2014. We also recognize that now, as we are approaching the election in 2017, the window of opportunity to get the Land Rights Act passed is stringent,â€ he said.

â€œWe really want to call on all the parties involved to do everything possible, not just to pass the Land Rights Act, but to pass a good Land Rights Act. This is very important.â€

According to Menghini, research conducted by the UN reveals that land is now the number one driver of conflicts in the country. He stressed disputes around land ownership, boundaries between communities and counties.

He said land rights are not issues of someone prevailing over someone elseâ€™s interest.

â€œA clear situation where ownership and tenure of land are clearly defined and recognized is in the interest of everybody,â€ he said.

Menghini called on partners implementing the project to keep their message to the communities simple so that land rights issues can be understandable to everybody, from the individual community member to the legislature and the executive branch.

â€œLetâ€™s not interpret land rights and tenure as a fight of a group against another group,â€ he stressed. â€œWe are all working here to promote certainty, and certainty is good for everybody.â€

Also speaking at the launch of the project, J. Adams Manobah, a commissioner of the Liberia Land Authority, said the countryâ€™s first civil war came as a result of political marginalization and that another problem could erupt as a result of land ownership.

Statutory and customary laws on land ownership must be treated equally before the justice system instead of granting priority of statutory ownership over customary, as it is currently, he said.

â€œThis is what we are heading to so that the villagers â€“ the communities â€“ will also be secured,â€ he said.

He called for proper coordination and cooperation among stakeholders in achieving the reform. He also praised the donor for the initiative and promised that the Land Authority would ensure that partners implement the program work in line with the terms of the project.

At the same time, a citizen of Lofa County fifth District says citizens of the district are calling on their representative, Moses Kollie, to ensure that the LRA is passed into law.

James Badabu said the citizens have vowed to campaign against Kollie if he does not support the act and ensure that it is passed before seeking re-election in October. Meanwhile, a member of the House of Representativesâ€™ Committee on Lands, Mines Energy and Environment, Rep. Matenokay Tingban, said the House had attached huge importance to the proposed bill.

Tingban said lawmakers are responsible for addressing any situation that threatens national peace and security, including land rights and ownership.

He said the delays in passing the act is necessary because good ideas have continued to arise, particularly the issue regarding customary rights.

He said lawmakers are convinced that if community land ownership is considered and communities are allowed to bargain with investors for usage of their land, a lot would be achieved.

â€œIf a decision is just centralized instead of being decentralized, then it becomes problematic,â€ Tingban said. â€œConcessions have been suffering from setbacks because the citizens are not pleased with the arrangement because they are not captured by it.â€

He said now that the Land Authority, the body to implement the proposed law, is established by law through the legislature, they would ensure the passage of the Land Rights Act.

At the same time, Rep. Larry Yanquoi has promised that his House Committee on Governance will collaborate with the appropriate bodies to pass the act.

A number of high-profile representatives of international organizations also lent their support to the passage of the bill.

The deputy special representative of the UN Secretary General to Liberia for Peace Consolidation, Yacoub El Hillo, said Liberiaâ€™s 14 years of hard-earned peace could be jeopardized if issues surrounding land are not properly resolved.

He said discussions surrounding finding solutions to problems associated with land ownership and tenure are important, especially at a time the country is working on a peace-building plan as mandated by a Security Council resolution in December 2016.

ECOWASâ€™s ambassador to Liberia, Tunde Ajisomo, also made a presentation at the launch ceremony, describing the initiative as welcoming.

Ajisomo said ECOWAS and the international community support a total resolution of disagreements around land issues in the country.

The Sustainable Development Initiative, along with other implementing partners are, at the same time, encouraging the National Legislature to pass the LRA into law.

Among other issues, the organizations are calling for the sale of customary land to be possible only after 60 years or two generations, to protect the interest of the future generations.

They are also pushing for the act to be inclusive of vulnerable groups, to include grievance mechanisms to redress grievances by citizens, and to include civil society organizations as partners in the implementation of the law.