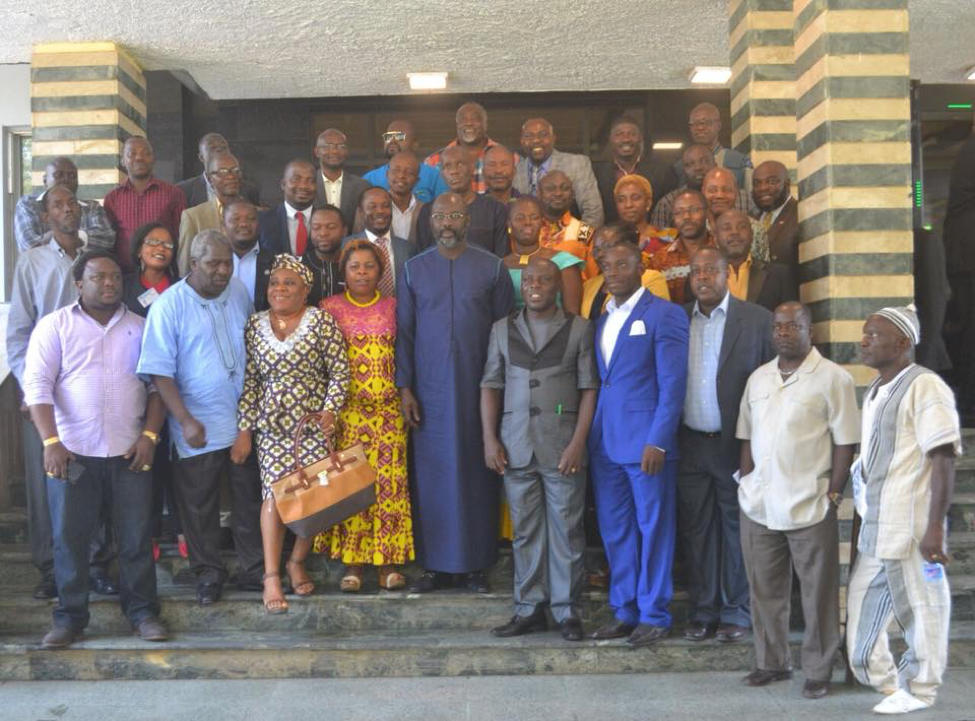 MONROVIA, Montserrado â€“ President George Weah has met with some media executives and officials of the Press Union of Liberia, amid growing concerns over press freedom in the country.

The Executive Mansion disclosed that the gathering marked the presidentâ€™s first meeting with the media to develop discussions towards strengthening its partnership with the government.

The union pointed out instances where journalists have been suppressed and intimidated, including Weahâ€™s recent comment accusing the Liberia BBC reporter, Jonathan Paye-Layleh, of being against him during the period of his advocacy for human rights in the country before becoming president.

The Press Union also pointed out the recent arrest of FrontPage Africa journalists and closure of its offices on the order of a civil law court on allegations of defamation filed by two private citizens. Additionally, it noted other intimidating comments about journalists and the media by other officials including Deputy Information Minister Eugene Fahngon, Mayor Jefferson Koijee of Monrovia, and Rep. Muna Pelham Youngblood.

One of the media executives who attended the meeting with the president was the Female Journalists Association of Liberiaâ€™s president, Siatta Scott-Johnson.

Scott-Johnson said speakers who represented the media were basically concerned that the free space for the media to operate was being threatened, giving recent hostile comments of government officials, especially the one involving Paye-layleh.

She said the media managers frowned on Weahâ€™s statement against the BBC reporter, and the irresponsible way the governmentâ€™s public relations were being handled.

She said Weah, however, disclosed in the meeting that heâ€™s a friend of the press and that he has no intention to go after anyone in the media because of their journalistic practice. He noted that he himself is a â€œmedia manâ€ by the fact that he founded Royal Communications Incorporated, owner of Kingâ€™s FM, Clar TV, and City FM, which he said has provided space for several journalists.

He named the provision of cash and land space for the construction of offices to house the Female Journalists Association of Liberia; financial contributions to the Press Unionâ€™s activities under the leadership of its past president, Abdullai Kamara; and advocacy for the media, among others as proof of his support to the media.

The president, according to an excerpt from the meeting, also clarified that he was not against Paye-layleh, as was being perceived, adding that rather he has rather to promote the BBC reporter by sitting with him and granting interviews at his private residence.

â€œHe comes to my house all the time. He sits with me and I promote him; thatâ€™s how BBC believes that heâ€™s a good journalist, because when you get news from George Weah, then BBC knows that you have interviewed George Weah,â€ he said.

He wondered how it was possible for him to simultaneously be against Paye-layleh and be promoting him.

â€œI am promoting his business, and now heâ€™s saying that I am against him. How?â€ the president said. Weah noted that he had only provided an answer to a question posed to him by the journalist.

â€œHe asked me a critical question, and I gave him a critical answer,â€ he said.

He encouraged Paye-layleh, who recently traveled to the U.S., Â to return to the country.

The president also reiterated earlier statements issued by the government that his administration had no hand in the recent closure of FrontPage Africa and the arrest of some of its journalists. He said the matter with FrontPage was between private individuals.

According to him, the case was not the first allegation of defamation against the papers and its managing editor, Rodney Sieh, who he said he had supported in so many ways. Weah recalled visiting Sieh on a sick bed, after coming down with illness while at the Monrovia Central Prison for a related case of defamation.

He also recalled providing US$10,000 to the FrontPage Africa Managing Editor to run promotional articles on him during the recent presidential elections. Meanwhile, Sieh has denied the claim, terming it as â€œa bold-faced lie.â€

â€œThe president has told a bold-faced lie bordering that of a criminal and Liberia should be worried about this trend and the direction we are headed,â€ he wrote in a response email to The Bush Chicken on Wednesday.

According to Sieh, the last time he physically saw Weah was when the president paid Sieh a visit to show support at the John F. Kennedy Memorial Medical Center, where he was receiving treatment when he fell sick during his 2013 prison saga.

He said the other instance was a 2005 interview he conducted with Weah in the U.S. during which Sieh said Weah acknowledged that he held French citizenship.

â€œAt the time when several people, including some of his opponents in the race, prevailed on me to release the audio of that recording on grounds that it could keep him from contesting, I refused because of the potential for resentment from Mr. Weahâ€™s supporters,â€ Sieh noted.

Sieh also noted that during the elections, Weah called him from an unknown number and asked for his help him with his campaign.Â However, Sieh said he made it known to Weah that he would remain independent in the elections and promised that his newspaper would cover the rallies of all candidates as it was already doing.

â€œThere was no discussion regarding any payment of any kind, and neither did Mr. Weah make such either through him or an intermediary,â€ he clarified, adding, â€œI find it very disturbing that the president of a nation would make such claims in my absence and without an invitation to attend his meeting with media executives.â€

Where he had the opportunity to be in the meeting, Sieh said he would have stood up to the president, letting him know that he is a liar.

However, Scott-Johnson criticized the way the meeting was organized, noting that it did not reach a resolution to pressing issues concerning the media.

â€œThese issues were just played with, but were not addressed,â€ she said.

Former Press Union president, Abdullai Kamara, who attended, also said while he extols the president for the meeting with media executives, he believes that it did not resolve issues the media has raised.

According to Kamara, although the meeting was announced to be interactive, it did not provide the space for sharing of views, as media executives were given opportunities to speak once and the president provided his response. He said he had expected a dialogue on the floor on issues raised by the media.

He confirmed instances where Weah made contributions to the Press Union, but said the current trend of attack on the media from officials of the government is worth serious concerns.

However, the Press Unionâ€™s President Charles Coffey said he was pleased that Weah had finally provided the much-needed clarifications that he had nothing against Paye-layleh.

Coffey reiterated that press freedom in Liberia is irreversible and said the union would continue to resist any attempt to reverse the gains for free press.

Coffey also disclosed to The Bush Chicken that perceptions of some officials in the government that the media was against the administration was untrue.

Coffey also said he was pleased that Weah promised at the meeting to work with the legislature to decriminalize libel.