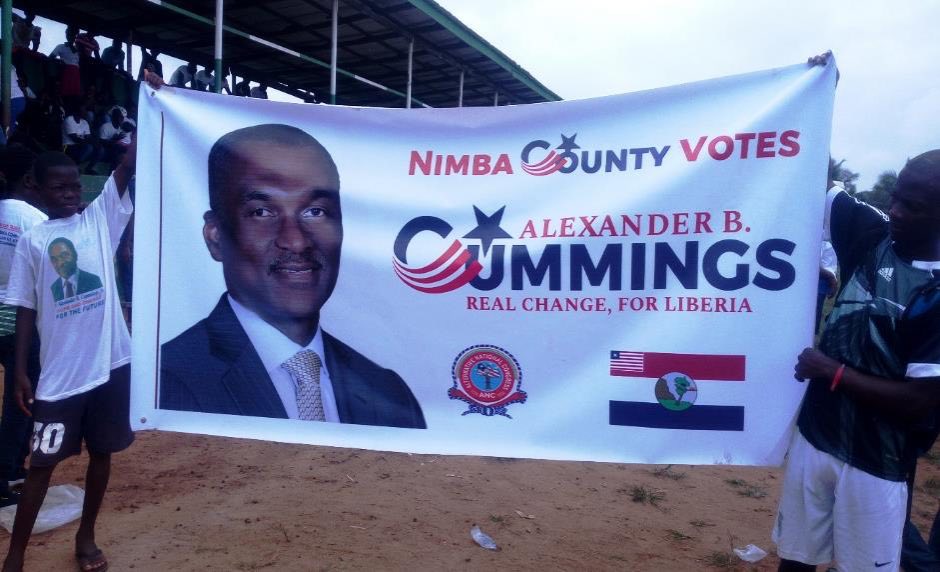 GANTA, Nimba â€“ The standard bearer of the Alternative National Congress has thanked the people of Nimba for their support to party during last yearâ€™s elections.

Speaking to supporters and partisans in Ganta over the weekend, Alex Cummings said he was touring the county as his own way of saying thanks to the people for giving him their support.

The ANC political leader said Nimba contributed a significant amount of the 110,000 votes ANC obtained during the elections.

â€œWe want to thank those supporters because they worked hard and gave us their votes,â€ he said, in addition to describing the tour as a recruitment drive. â€œWe want to try to encourage people to join the ANCâ€”we want to build our party and to make it a strong institution.â€

A former executive with one of the worldâ€™s most recognized brands, Coca Cola, Cummings was relatively unknown before the elections. While he managed to become surprisingly popular, he did not win enough votes to take him into the second round of the presidential elections.

With the party expected to go to convention in 2019 to choose a new political leader, Cummings has promised to remain engaged in politics until the party decides who will become its next standard bearer.

â€œWhat I am focused on right now is to make the ANC a strong opposition political party, and the rest will take care of itself,â€ he noted.

He said a major regret of the party is the fact that ANC did not secure a seat in the House of Representatives.

â€œI also think that we were relatively new to politics in our country, and that contributed to our outcome,â€ he added. â€œIf we had a bit more time, the outcome would have been differentâ€”but we learned a lot through this process, and we will use some money to strengthen and grow the party moving forward.â€

He called on all Liberians and other opposition political parties to join in support of the current government for its success.