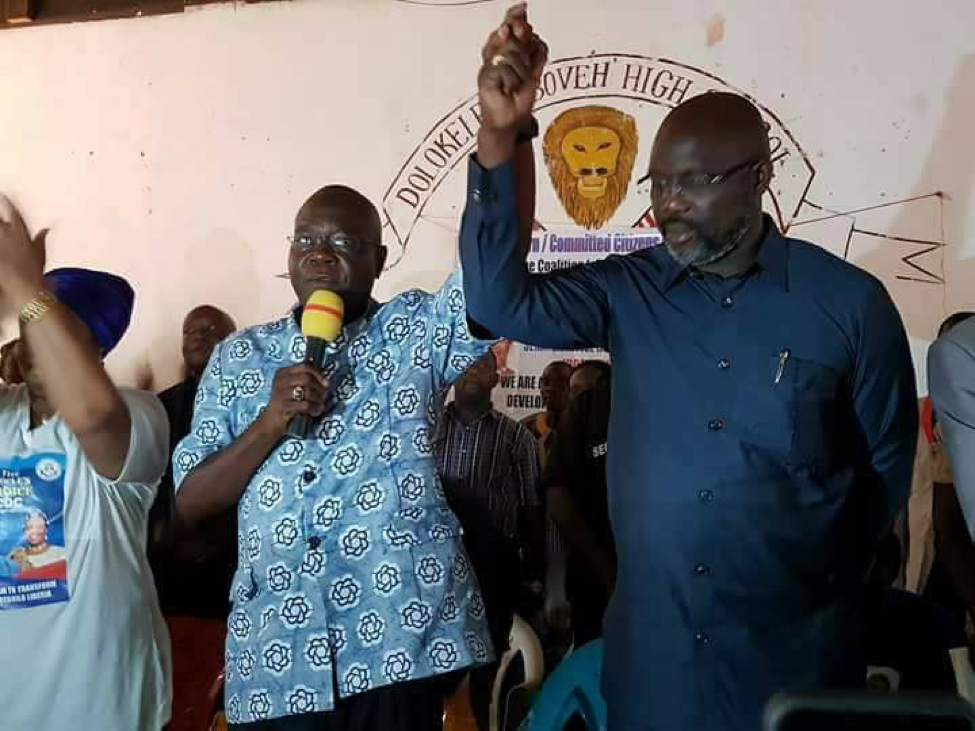 GBARNGA, Bong â€“ Ahead of the December 26 presidential runoff election, the vice standard bearer of the Alternative National Congress, Jeremiah Sulunteh, has endorsed the Coalition for Democratic Change.

Sulunteh said his endorsement for CDC is predicated on the Ganta Declaration that calls for consolidated opposition efforts in the runoff election.

More than 15 opposition political parties met in Ganta, Nimba in 2016 and agreed to form a common front against the ruling Unity Party in case of a runoff following the October 10 elections.

He also said as a citizen of Bong, it was important to support a senator from the county, Jewel Howard Taylor, as a show of unity and county solidarity.

â€œMy decision to stand [at] the side of sister Jewel Howard Taylor today signifies the clarion call for our unity as a people,â€ he said. He challenged the standard bearer of the CDC, George Weah, to work in the interest of Liberians by ensuring a corruption-free government and making sure that the aspirations of the Liberians are achieved if elected president.

â€œEven as we support you Mr. President in-waiting, that we will stand by you, we will be critical when it is necessary because it has to do with the lives and the future of these young people who are followers of your dream,â€ he added.

Sulunteh said Bong now has a â€œgolden opportunityâ€ to produce a vice president for the first time in Liberia with Taylor as running mate on the ticket of the Coalition for Democratic Change.

In his acceptance remarks, Weah welcomed Suluntehâ€™s endorsement and called on citizens of Bong and Liberians to vote the CDC for a better country.

Weah said a CDC government will be responsible and responsive to the needs of Liberians.

Weah promised that any official of his government who will engage in acts counterproductive to the developmental interests of Liberians would be made to pay for their actions.

â€œAll those who will work in my government have to do due diligence. They have to work hard; everything they do must be in the interest of the Liberians,â€ Weah said.

He continued: â€œBecause we will not tolerate corruption in our government because Liberia needs to develop.â€

He named improved education, health care, reconciliation, job creation, accountability, and infrastructural development as some of the fundamental areas of focus for a CDC government.

Suluntehâ€™s Alternative National Congress obtained 7.1 percent of the total valid votes cast in the October 10 elections. In Bong, the home county of Sulunteh, the party finished in the third position with 8,359 votes.

Views about Suluntehâ€™s endorsement for the CDC are mixed in Bong.

Some people, predominately partisans of the Unity Party, believe that with the relatively smaller number of votes the ANC obtained in Bong with Sulunteh as running mate in the October 10 elections, his declaration for the CDC will not make a significant difference in the runoff, while supporters of the CDC hold the view that his â€œBong County solidarityâ€ would play in favor of the CDC.

The endorsement ceremony was held on Wednesday in Gbarnga and attended by scores of supporters and sympathizers of the CDC.