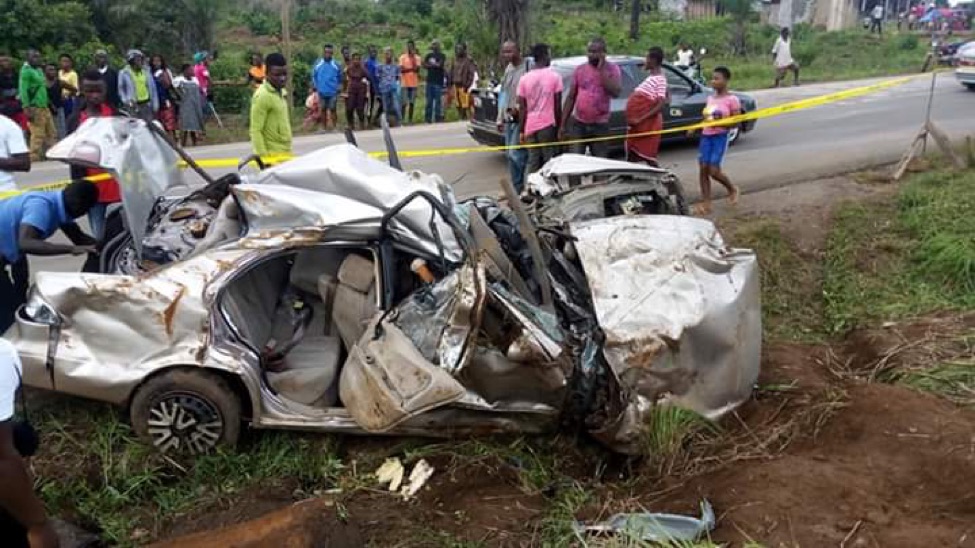 TOWER HILL, Margibi â€“ Over the weekend, three lives were lost to a car crash caused by a truck that rolled back down Tower Hill along the Robertsfield Highway.

Maccelia Yonpuwel, a 27-year-old woman and student of the African Methodist Episcopal University, was killed in the wreck, along with her son and a nephew. The deceased was traveling in a commercial vehicle on Saturday when a broken-down truck that was being pulled up the hill by another truck fell back and crashed on the vehicle they were riding in.

John Stanley Nyumah, Jr., another survivor, told family members that he survived the accident only by divine intervention. His father, John Stanley Nyumah, Sr., told The Bush Chicken that rescuers had managed to dislodge the vehicle from under the truck and save his son using a metal pole.

The rescuers, however, did not have time to rescue Yonpuwel and the two children before the truck completely crushed the vehicle.

â€œI was surprised when my son called me on a strange number to inform me that he was involved in an accident,â€ the elder Nyumah said. â€œWhile we were still talking, he went off the line abruptly. I became worried and scared but was later relieved when I called the number later and a lady answered and told me he and the other victims were taken to ELWA Hospital.â€

He said his son also informed him that during the time he was rescued, that Younpowerl and the two kids were still alive but that rescuers were having difficulty freeing them due to the weight of the cement truck.

â€œMy son said while the rescuers were tirelessly trying to rescue Maccelia and the kids, both boys she was traveling with, the jack truck failed, thereby freely allowing the cement truck to fully crash over the commercial vehicles,â€ Nyumah added.

The Roberts International Airport detachment of the Liberia National Police, under whose jurisdiction the accident occurred, say they have not yet determined the actual cause of the accident. Police promised to reach out to the media only after its investigation is concluded.

Tower Hill, along the highway leading to the airport, has been the scene of many fatal accidents. One of the most recent involved the late Rep. Adolph Lawrence of Montserradoâ€™s 15th district, who was killed in March.

According to the Liberia National Police, Lawrence and Gwendolyn Dabah Wilson, a female passenger riding in the front seat of his vehicle, was pronounced dead after a truckâ€™s brakes failed on Tower Hill, resulting in a collision with their vehicle at approximately 11:30 p.m.

The World Health Organization now rates Liberia as the country with the highest road traffic accident fatality rate, from being the second-worst rate of road traffic deaths in sub-Saharan Africa in 2017. Although there is a law requiring all vehicles being registered to be inspected for roadworthiness before being allowed to travel on the countryâ€™s roads, any vehicle can be registered without a physical check. This is happening even though the launch of the countryâ€™s National Road Safety Action Plan in October 2018.

Road safety insiders have since drawn attention to the stalled efforts to begin implementing the Road Safety Action Plan. A document prepared by an unspecified development partner to assess the reasons for the delay in implementing the plan noted that the delay is allowing hazardous conditions to remain on Liberiaâ€™s roads, thus contributing to high rate of road traffic accidents, such as the one that killed the late representative.

The report described the failure of the Transport Ministry to implement the plan as a major concern that is symptomatic of an inability to address road safety at all levels. It further noted that individual members of the Road Safety Secretariat, representing all five member ministries and agencies, have expressed their support for improving road safety in the country, but are also angry and frustrated over the manner in which the secretariat is being run.

James Mulbah, a resident in Monclayâ€™s Town, a community close to Roberts International Airport, expressed his frustration over the governmentâ€™s failure to act to reduce road traffic accidents.

â€œDo you know how many persons have died as a result of abandoned vehicles on this road? Just a few days ago, the country mourned the death of another great statesman at that same place, but yet still, nothing is being done to curb these unfortunate situations,â€ Mulbah said.

Nathan Baryougar, another resident of the community, also accused the police of only extorting money from drivers, but not doing anything to regulate vehicle movements.

â€œJust imagine, the police officers will come across cars in bad condition but will fail to pack them. Some do not even have reflectors. When there are breakdowns at night, these vehicles become easy death traps for hundreds of road users,â€ Baryougar told The Bush Chicken.

â€œEvery time we regret an accident, authorities turn their backs and do nothing until another one occurs.â€

Younpowel, the deceased, was a 2011 graduate of Firestone Senior High School.