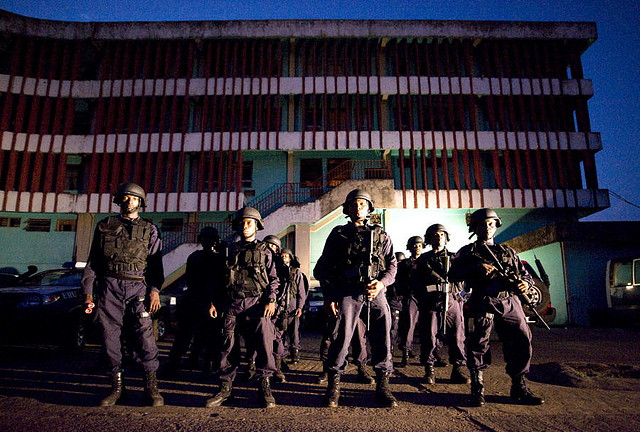 TAPPITA, Nimba â€“ On May 1, health authorities released the journalist Jeremiah Gayflor from his isolation at the 14 Military Hospital. At his hometown in Tappita, residents â€“ mostly women and children â€“ crowded the streets to celebrate. They also broke into quarantine facilities and hugged patients.

Videos surfaced on Facebook showing people dancing at the Mother Blessing Guest House and at the Voice of Tappita radio station, two areas where people are being quarantined after coming in contact with Gayflor. The videos also showed residents dancing outside the Jackson F. Doe Hospital fence.

Many of the celebrants, family members of the individuals being quarantined, were likely misinformed about what Gayflorâ€™s release meant. They assumed that their relatives, who Gayflor came in contact with, would now be freed because Gayflorâ€™s second set of tests came out negative. The journalist himself has not helped the situation, as he has said he does not believe that the Coronavirus is in Tappita, although he admits COVID-19 is in Liberia. Gayflorâ€™s belief stems from the fact that he was asymptomatic when he contracted the virus.

Nevertheless, the rowdy scene prompted the Liberia National Police to deploy armed police officers from the Police Support Unit and the Emergency Response Unit across the city. That decision has prompted some condemnation from citizens, who fear worse harassment and abuse from the officers.

However, police spokesperson Moses Carter told The Bush Chicken via phone that the deployment is meant to provide more security for the public and for health workers by ensuring that health protocols are not violated.

Carter said the police commander in Tappita, Augustine Gbalea, had alerted headquarters that the citizens had broken into quarantine centers and were threatening to attack health workers for lying about Gayflor being Coronavirus positive.

Carter noted that the crowd violated health protocols by gathering in large numbers and breaking into quarantine centers. He warned that their actions could spark a rapid spread of the virus.

â€œIf the journalist went through the period of quarantine and he was discharged, all they needed to do was to call on the local radio station and tell God thank you for their son and brother and not to break into quarantine centers like what they did,â€ Carter said.

â€œAnd so we thought that there was a need to have the presence of armed officers to protect the lives of the health workers because we know that when people are angry, they can do anything.â€

The police spokesperson said the officers will remain in Tappita until they need to be recalled. However, he said citizens should not be intimidated by their presence.

â€œWe are here to support the health workers in the fight against COVID-19, and so if we are having a serious breach of those policies, we have to take prompt action,â€ he explained his decision.

A civil society group in Tappita, however, says armed police officers are not necessary to calm the situation. Steve Dehmie, the spokesperson for the Concerned Citizens Movement, warned that the move could sour the relationship between the community and the hospital, making it difficult to fight the Coronavirus pandemic.

He pointed out that those in the streets were mostly women whose husbands were quarantined and that they posed no threat that should merit the deployment of armed officers in Tappita. He advised that the violation of health protocols could be handled at the community level, instead of bringing in officers to instill fear.

Dehmie said the episode is contentious because it reminds many Tappita residents of 2019 when officers of the Armed Forces of Liberia deployed in the city during the period of the Gbanipea Gold Mine Disaster harassed some citizens. He promised that his group and the Tappita mayor would meet to discuss the issue.