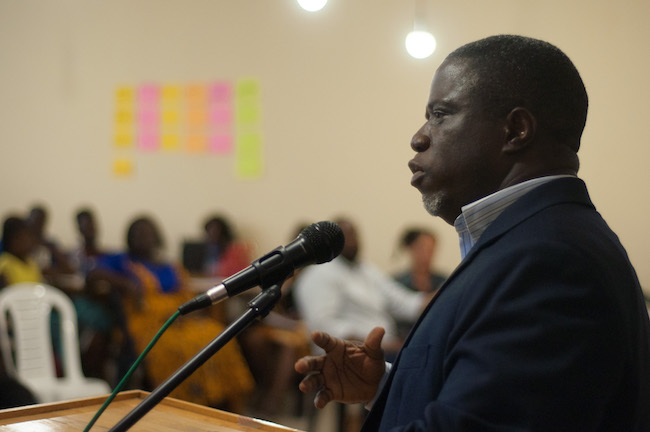 MONROVIA, Montserrado â€“ An official of the Ministry of Education says the size of the national budget envelope is responsible for the low allotment to education in the country.

The Ministry of Educationâ€™s assistant minister for research and planning, Dominic Kweme, told the audience at a film festival organized Wednesday by More-4-Education that the continuous low allotment to education is because the country has too many competing priorities for its budget.

More-4-Education is an advocacy campaign platform calling for the full implementation of the 2011 Education Reform Act, and for 20 percent of the national budget or at least six percent of the countryâ€™s GDP to be allotted to the sector.

Kweme said a 20 percent allotment to education in the national budget is a reasonable proposal that every official in the government, including members of the executive branch and the National Legislature, would be in favor. He said the current budget cannot fully address the existing challenges in all sectors. He disclosed that the president particularly supports education, believing that when young people are empowered, they positively contribute to the development of the country.

He said currently, there are 5,436 schools registered under the Ministry of Education, including 2,612 public schools. But he said only 64 percent of the public run institutions are housed in concrete buildings. He said about 1,921 public schools are operating from either makeshift or structures or buildings constructed by mud or mats.

Three short video documentaries focusing on investing in girlsâ€™ education, equipping teachers, and strengthening parent-teacher partnership were featured during the film festival. The documentaries provided insights for the need to increase funding support to education.

According to the assistant minister, the documentaries would not only help tell the story of young people but to also inform policymakers about the challenges in the sector.

â€œThere is a need for budget increment for a conducive environment for all students,â€ he said.

USAIDâ€™s education specialist, Mardea Nyumah, also disclosed that the films reflect the realities in the country and other parts of the world, in addition to making citizens understand the need to do more to increase their influence and that of the media in the governance of public goods and services. Nyumah said the documentaries would also help build more effective, accountable, and inclusive governance in the country.

â€œMany of us need to use our various positions and platform to work to enable the film world. Film criticism and lively public discussion of all forms of film have an important role to play in development,â€ she said. â€œPrepare yourself to be challenged, excited and inspired.â€

Sheriff Baysah, a member of the National Teacher Association of Liberia, also stressed on the need for improving the welfare of teachers, including with salary increment. Baysah said while teachers are the ones responsible for preparing future generations, they receive salaries as low as L$7,500 (US$41.6) while other civil servants, including directors, are paid up to US$1,500. Baysah was likely referring to â€˜volunteerâ€™ or supplementary teachers, as the legal minimum wage is more than twice the figure he listed.

â€œItâ€™s good to have a good learning environment and nice building, but they are nothing when the teachers are not trained and equipped to motivate the students for education,â€ Baysah said. He noted that teachers are nation builders and no country can be developed without education for its citizens.

More-4-Education is a component of the USAID-sponsored Liberia Voice Accountability Initiative which is currently implemented by 10 civil society organizations. The organizations include the Youth Movement for Collective Action, the National Teachers Association of Liberia, the Youth Coalition for Education in Liberia, the National PTA Network of Liberia, Helping Our People Excel, Inclusive Development Initiative, and the Coalition for Transparency and Accountability in Education.