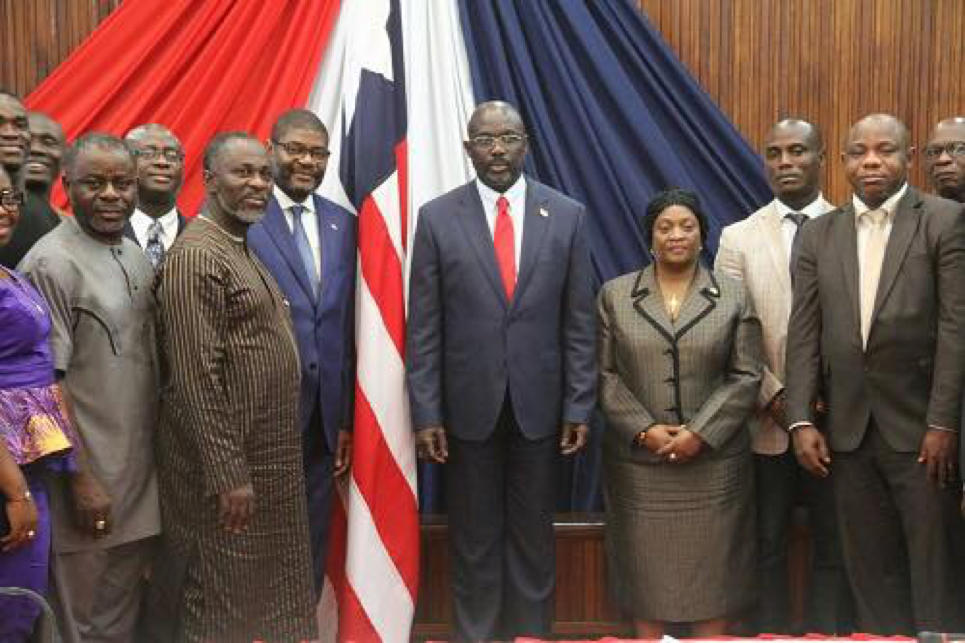 According to a press release issued by the Executive Mansion, the meeting was held on Wednesday at Weahâ€™s Foreign Affairs Ministry office. It brought together Weah, his vice president Jewel Howard-Taylor, and heads of ministries, agencies, and corporations, who have been confirmed and others whose nominations are yet to be confirmed by the Senate.

The Executive Mansion release said the president reiterated his priorities including construction of roads, health, education, and youth empowerment as part of his â€˜pro-poorâ€™ agenda for the country.

â€œOur approach to addressing problems will enable us [to] rapidly achieve our goals for the greater good of the people,â€ the president is quoted as saying. â€œYou will be judged effectively on account of your performance and tangible results.â€

He said he would not hesitate to replace officials who fail to deliver in line with the governmentâ€™s agenda.

Despite a recent clarification made to the BBC by former president Ellen Johnson Sirleaf that her administration left at least US$150 million as turn-over to the new government (contrary to prior reports that only US$500,000 were left in the governmentâ€™s coffers), Weah maintained that he took over a broke government and broken economy.

He told cabinet members that the economy was now their responsibility to fix and that they must prioritize a recovery plan for the betterment of Liberians.

Weah mandated government agencies to carry out a comprehensive needs assessment, to develop a roadmap for practical, achievable, and realistic outcomes in the short and medium-term. The reports are expected to be submitted in two weeks to a special committee of the cabinet.

The committee would work to provide a guiding framework towards advancing the governmentâ€™s agenda, which would be submitted for the presidentâ€™s input in three weeks.

â€œThe proposed policy must be practical and attainable, given our current budgetary constraint, rather than financially unrealistic and difficult,â€ Weah reportedly said.

During the gathering of key government officials, the release further disclosed that the cabinet received briefings from the countryâ€™s foreign service and security sector.

Among other things, the briefings included the need for online visa services to enable issuance of visa on arrival, the need for reform in the criminal justice system by augmenting the strength of the Liberian National Police to its full capacity of 8,000, and the need to decongest the over-capacitated Monrovia Central Prison.

As part of major decisions taken during the meeting, the cabinet also reviewed the need for a recast of the current national budget and establishment of a list of immediate priority needs.

Among them are the payment of WASSCE fees for all 12th graders in the country; the maintenance and construction of traffic and streets lights in Monrovia; digitizing the University of Liberiaâ€™s registration process and providing Wi-Fi connections in key locations on the universityâ€™s main campus; upgrading equipment and facilities at the John F. Kennedy Medical Center; and supporting a government-backed credit line to stimulate private sector development.

According to the release, these activities would be aligned with the execution of other competing priorities of the government. They include the issuance of National Identification Biometric cards to enable payroll clean-up; adding 400 Partnership Schools for Liberia teachers to the governmentâ€™s payroll, and correcting 180 underpaid personnel.

The government would also undertake professional skills development to increase the number of Liberia experts in the health sector, to support humanitarian outreach programs by the first lady, and to carry out a feasibility study for a military hospital.

Foreign Minister Gbehzohngar Findley who is also the dean of the cabinet, described the meeting as impressive. He said the meeting has reawakened the enthusiasm among government officials to ensure that the governmentâ€™s agenda is realized.

Meanwhile, the cabinet is planning a retreat for cabinet members to become better acquainted with executing their functions.