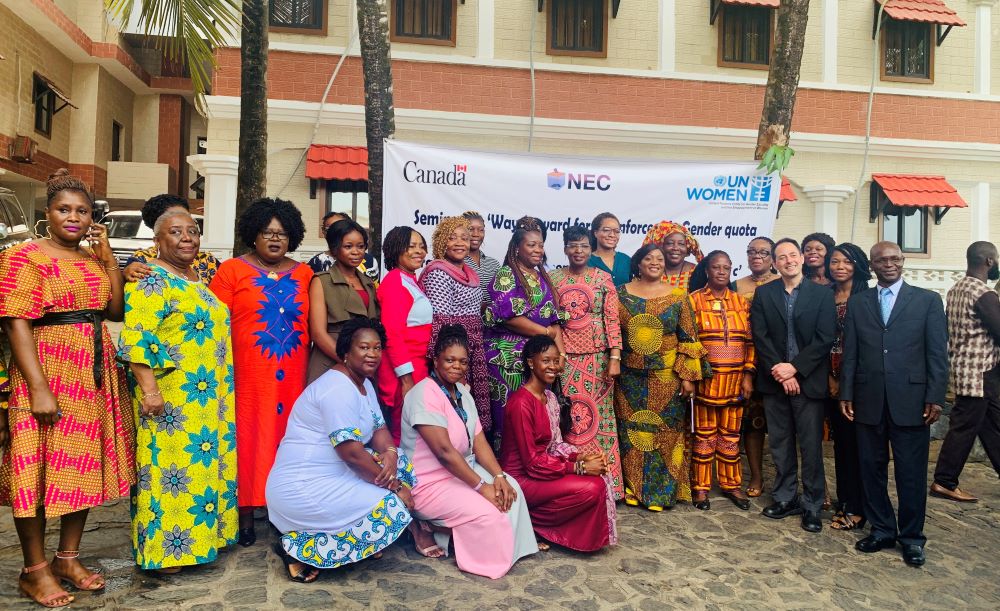 MONROVIA, Montserrado â€“ Ahead of October 2020 senatorial by-election in Liberia, the UN agency which focuses on women empowerment, UN Women, has organized a seminar on strategies to enforce gender quotas and implement the provision of the Elections Law that requires political parties to â€˜endeavorâ€™ to ensure that at least 30 percent of their candidates are of either gender.

During the 2017 elections,Â only 15.9 percentÂ of the total number of candidates in the elections were females and no party met the requirement. However, the National Elections Commission did not penalize the parties because it said all they needed to do was to show that they were trying to ensure that they met the threshold.

Speaking during the event on Monday, March 9, Vice President Jewel Howard-Taylor laid some of the blame for the underrepresentation of women in electoral positions on the lack of financial resources, negative cultural norms, traditional beliefs, and violence against women.

In order to have more women in political leadership, Howard-Taylor said Liberians will need to break the norms and cultural perception that â€œwe are a male-dominated society, and that the game of power must be played according to menâ€™s rules.â€

She also pointed fingers at the absence of an enabling legal framework that was working to change the culture, although she acknowledged that additional financial resources may be needed to fully incorporate women into national political life.

The vice president then called on Liberian women to make their voices heard loudly and to use all of the platforms at their disposal.

Howard-Taylor was also concerned that election-related and politically-based violence against women could scare younger girls and women away from politics.

During recent by-elections in Montserrado, for example, there were reports of many cases of violence against women in politics, one of which was the unprecedented attack against Telia Urey, who contested a representative seat in the countyâ€™s 15th district by-election in 2019.

â€œThe issue is, if we do not have women in critical spaces like the legislature and presidency, we will continue to retrogress,â€ she said, noting that for all the sacrifices made, and millions invested in women empowerment if women donâ€™t act fast and boldly, years to come people will wonder if it was all worth it.

Womenâ€™s groups and partners around the world have increased advocacy for women’s political leadership. Some of these groups have reached out to the 53rd National Legislation and sought to pass the Affirmative Action Bill, which was meant to reserve seats for special groups, including women.

According to the Liberia Institute of Statistics and Geo-Information Services women constitute an estimated 50 percent of the Liberian population, and over 48 percent of registered voters according to NEC record. And yet, women are poorly represented in elected positions.

The UN Women seminar is funded by Canada through its Women Political Empowerment and Leadership Project.

Marie Goreth Nizigama, country director of UN Women, supported many of the points highlighted by the vice president. She noted that the evidence suggests that increased womenâ€™s political participation in leadership helps build safer, more inclusive, and more stable societies.

â€œWhen women are in decision-making positions, more inclusive decisions are made, different voices are heard, and different solutions are created,â€ she said.

According to Nizigama, countries with a greater presence of women in politics experience greater health, education, infrastructure, and infrastructural benefits; and the fight to end violence against women occurs more credibly. Overall, she said the quality of life generally increases.

In Rwanda, for example, where women constitute 61.25 percent in the countryâ€™s lower house and 38.46 percent in the upper house, the country is now among the fastest developing nations in Africa, socially, educationally, economically, and politically.

Various efforts have been launched in Liberia to increase womenâ€™s political participation. These include the Fairness Bill of 2009, the Gender Equity in Politics Bill of 2010, An Act to amend the Elections Law of Liberia 2013, Womenâ€™s Minimum Agenda for Constitutional Review 2014, the Equal Participation and Representation Bill of 2016, also known as the Women Affirmative Action Bill, and the proposition for 15 reserved seats submitted to the Senate by President George M. Weah in August last year.

â€œAll of these have been stonewalled,â€ the vice president said.

â€œThe amendment of the Elections Law culminating into the New Elections Law 2016 came up short, it called for political parties to â€˜endeavor to ensureâ€™ that no less than 30 percent of their candidates on lists submitted were of a particular gender. This has been termed as ambiguous and unenforceable by the Elections Commission because it proposes no sanctions.â€

The head of UN Women stressed the need for quotas and affirmative actions to enhance womenâ€™s political participation in Liberia because, according to her, there is not a level playing field for men and women â€“ the odds are stacked against women.Â Nizigama encouraged political parties to get on board in supporting NEC to implement the lawâ€™s requirement by setting voluntary quotas.

Some positive developments have recently been reported from the NEC, however. The commission recently validated protocols to deal with Violence Against Women in Elections and Politics. Additionally, consultations are underway with political parties and civil society organizations on how to mitigate victimization of women ahead of a planned Ganta Declaration on Anti-Election Violence.