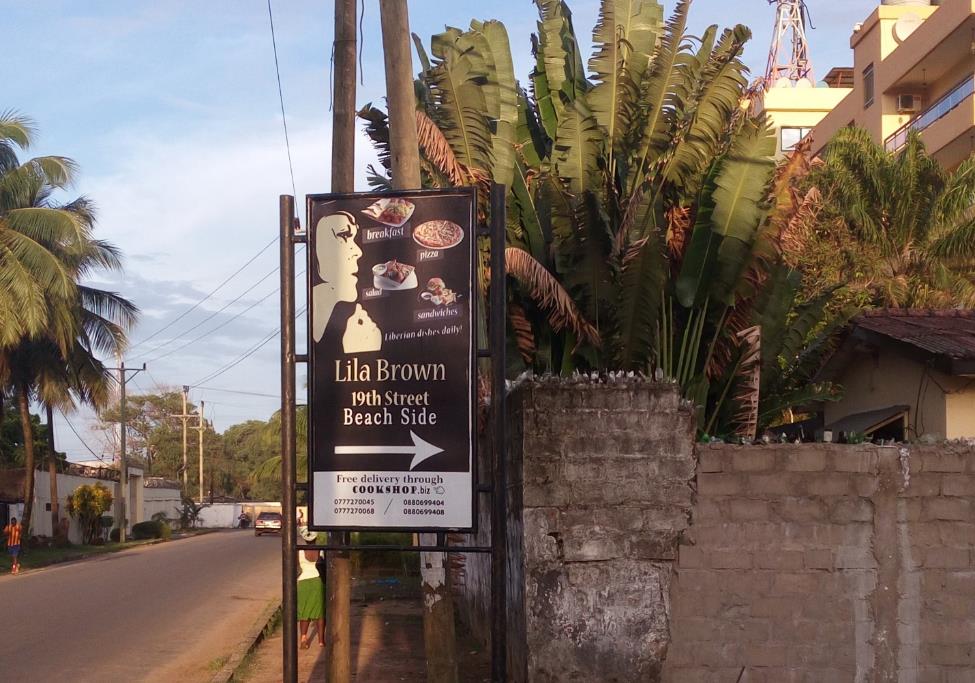 Since my return to Liberia, Iâ€™ve been eager to visit Lila Brown at its new Sinkor location (just before the 19th street beach) â€“ especially since I, via my previous employer, helped facilitate the mural on its side wall.

My verdict is that the new location is an upgrade to its previous Mamba Point incarnation (and thatâ€™s not just because of the colorful mural). Although business was low during my Wednesday evening visit, the polished wooden deck seemed much more spacious and was certainly quite airy and refreshing. I didnâ€™t take a close look, but the bar counter also appeared to be quite expensive. A view of the mural on Lila Brown’s walls. Photo: Brooks Marmon

The space also boasts several alcoves, ensconced amidst lush vegetation, providing a quiet space for intimate conversation. The area seems to be slightly larger than say, FuZion and is far more aesthetically pleasing.

Iâ€™ve never felt particularly motivated to sample the food at Lila Brown, although one Washington DC-based NGO worker once raved to me about a breakfast sandwich that she had made to order there.

I didnâ€™t plan to deviate from my normal plan of sticking with drinks at Lila Brown; I usually go for the exquisitely refreshing lime-ginger juice, but I have also heard great things about their cocktails. I ordered a beverage I saw another patron imbibing; a slightly discolored beer from a receptacle with an encrusted rim held an irresistible allure.

Iâ€™m not exactly sure what it was, but it is probably best described as a beer version of a margarita. It seemed to have been constituted by splicing a bottle of beer with a lime concentrate. The glass was also garnished with a generous sprinkling of salt that conveniently served to propel oneâ€™s thirst.

The Mexican theme continued when my drinking companion ordered vegetarian nachos. The chips seemed to be authentic maize-based tortilla, there was sour cream, diced fresh tomato, and what seemed to be canned kidney beans and jalapeno peppers. There was also a not very generous application of some sort of cheese wiz. Given the plethora of avocados (aka butter pears) now circulating in the markets, it was regrettable that guacamole was not part of the dish. The nachos were not bad, but neither did they make me regret my many previous visits to Lila Brown where I did not sample the food. I was vaguely reminded of my experience with the Mexican buffet at the Royal Grand Hotel.

The restaurant also seems to be engaging in some exciting activities to draw in customers; a chalkboard indicated weekly showings of The Game of Thrones, and Iâ€™ve also heard buzz about $20 open lobsters, which will probably entice me away from my drinking only forays sometime soon.

The new (and improved) Lila Brown is a great place to get a drink, although sadly the location just falls short of providing a view of the water. Iâ€™m admittedly drawing on a small sample size, but my feeling is that its nearby competitor Sajj offers better meals, albeit in not nearly as comforting an atmosphere.