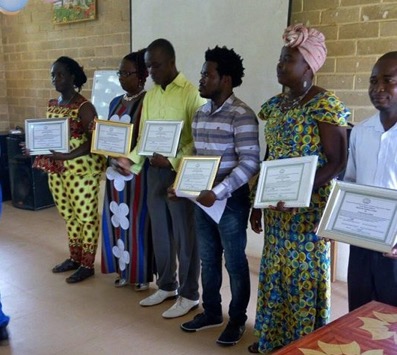 GBARNGA, Bong â€“ Officials of the Bong chapter of the National Civil Society Council of Liberia have been inducted into offices in Gbarnga.

Members of civil society organizations in the county recently elected new officials to steer the affairs of their umbrella organization for a period of three years.

Those inducted include Marline Jarwoe as chairperson, Dorothy Toomann as co-chair, and George Philip Mulbah as secretary general.

Moses Bailey was installed as financial secretary, while Quita Saybay-Tokpah and Hamson Dolo, were inducted as members-at-large.

[Full disclosure: the author of this article, Moses Bailey, is an official of the Bong County Civil County Council.]

Delivering the keynote address at the CSOâ€™s induction, Cuttington Universityâ€™s president, Herman Browne, cautioned the inducted officials to serve the interest of the public with dedication and commitment.

â€œThe public looks to the CSOs for light; it is your responsibility to help the public,â€ Browne said. He said educating and informing the public about governance issues is a cardinal responsibility of civil society, in addition to holding public officials and the government accountable to deliver basic social services.

The chairperson of the CSO, Marline Jarwoe, said her administration would work with everyone, including those in the public and private sectors, to ensure effective governance in the county.

She challenged her fellow inductees to serve with commitment, adding that the work of the civil society is not to widen confusion in the county; rather it is to advocate for the voiceless and mediate where necessary.

â€œOur primary role is to advocate for basic social services for our people and provide education for them on those issues that matter to them about governance and other issues,â€ Jarwoe said. â€œTo effectively play this role, we need to understand the issues ourselves.â€

In another development, the Bong County Civil Society Council has issued a statement, calling for the speedy adjudication of those arrested in connection to the reported looting and vandalizing of MNG Goldâ€™s facilities in Sayewheye in Bongâ€™s first district on November 5, 2018.

Following the looting, which was spurred by a motor accident that killed four persons from the community, police in the county arrested more than 60 persons for their alleged roles in the act, some of whom are still in detention.

â€œThe CSO [group] is also calling on the police to provide a more forensic detail report on the cause of death of Othello Saye, whose body was reportedly found around the camp of MNG Gold following the incident,â€ the statement read.

The groupâ€™s statement followed meetings with the local leadership, MNG Goldâ€™s management, members of the bereaved families, as well as ordinary citizens.

â€œThese meetings were meant to enable the CSO have first-hand information and understanding of the situation in the area,â€ the statement added. The Bong chapter of the National Civil Society Council is also calling on the leadership of the county and the national government to help cement the relationship between the company and the citizens through dialogues, to ensure that the company lives up to the mineral development agreement it signed with government.

The group also asked â€œthat the leadership of the county, including the Bong Legislative Caucus, exerts every effort in improving relationship between local people and concession companies in the spirit of solidifying peace and stability in a timely fashion.â€

The statement further calls on citizens of the county to always seek redress through legal means whenever they are disenchanted as a means of helping the state maintains peace and order, and as well helps government creates a conducive investorsâ€™ friendly environment.