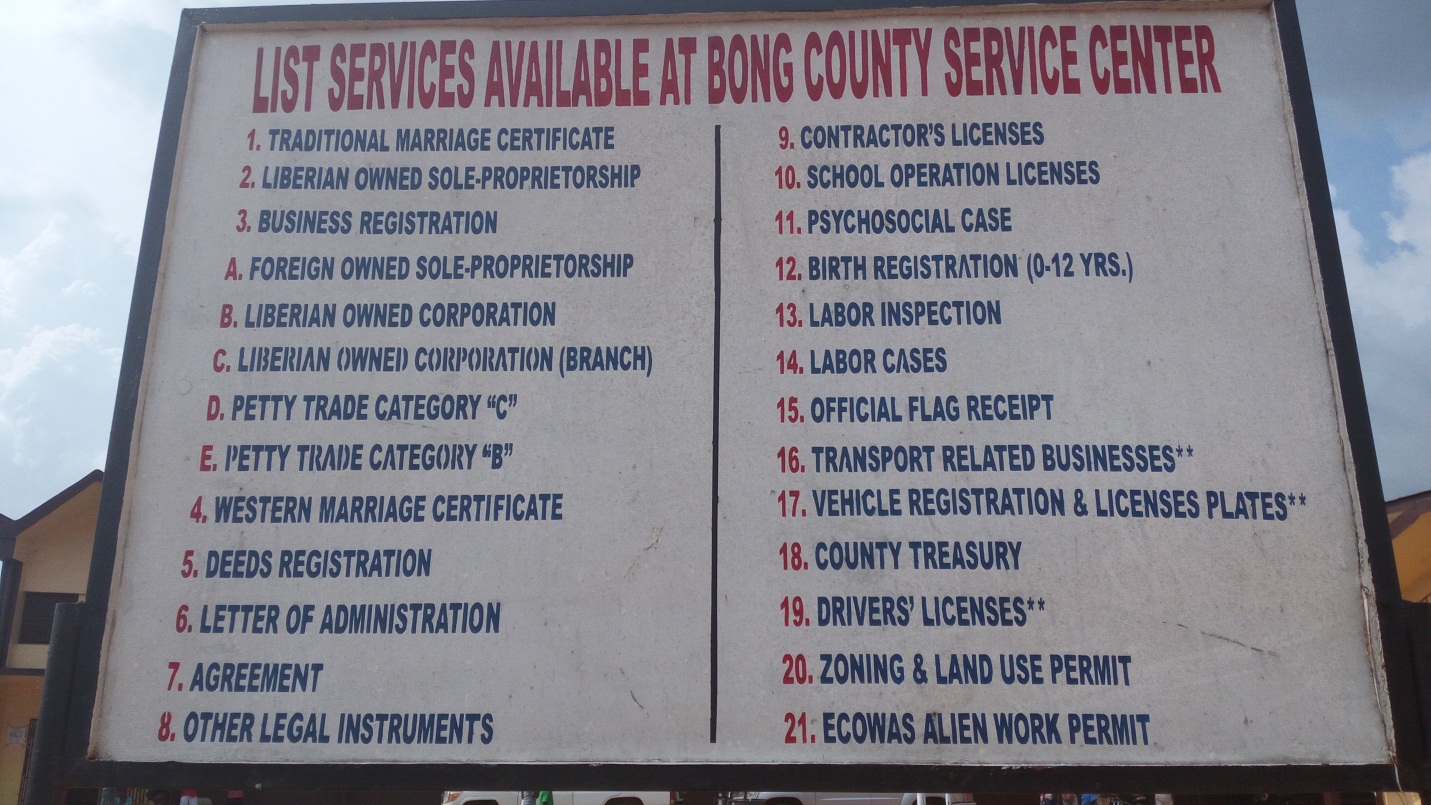 GBARNGA, Bong- The Bong County Service Center has raised a total revenue of LD 6,998,520 ($69, 431.97) from fees collected in the processing of government services including driverâ€™s licenses, work permits, school permits, business certificates, birth certificates, but a few to mention.

The service center which opened on 25, April 2016, is one of eight centers that set up shop nationwide under the Decentralization Policy; an effort designed to bring government services to the counties so that citizens donâ€™t have to travel to Monrovia to process documents they need to drive, work, or open a business or school.

The money was generated from 6,731 users who filed for various registrations from May 2016 to March 2017.

The Bush Chicken received the information in response to a Freedom of Information request to the Bong County Service Center asking for a full report of the service centerâ€™s operations during that period. Financial reports for April and May were however not available when the Bush Chicken went to press.

The service center is important under the governmentâ€™s â€˜Decentralization Pillar,â€™â€™ said Jefferson Gbaryan, the centerâ€™s coordinator.

â€œThe Bong County Service Center has brought relief to our people in this county in terms of accessing government services,â€ he said. â€œThis center is a one-stop shop that gives you a lot of services that we all use to get in Monrovia.â€™â€™

Bong County residents who have used the center said itâ€™s convenient because they no longer required to travel to Monrovia to receive every document they need to work or do business. Emmanuel Diabolo, a resident of Gbarnga said it took him one day to register a vehicle.

â€œI want to extend thanks and appreciation to the government for this decision to bring the county service center to Bong County,â€ Diabolo said.

â€œBefore then, we had a centralized system where every activity; when it comes to driverâ€™s license, vehicle document, everything, was in Monrovia and sometimes when you go there, you had to take a week just to get a document.â€

Diabolo is encouraging his neighbors to take advantage of the center. Itâ€™s not perfect, he said, but it is making things easy for citizens to access government services without the inconvenience of traveling to Monrovia.

â€œYou can walk to the Gbarnga Administrative Building and access services,â€ he added. â€œI went to the center and that same day, I got my daughterâ€™s birth certificate,â€ Kollie said. â€œThe process is done on the basis of first come, first serve.â€

Kollie is spreading the word to other parents to come to the center to get their childrenâ€™s birth certificates as well. Clarence Jackson, a Liberian journalist residing in Gbarnga, Bong County, recently got his traditional marriage certificate in one day. He said the center is a relief because couples no longer travel a long way to Monrovia to get marriage certificates.

â€œBefore then you had to go to Monrovia and that is the reason why more people felt discouraged about obtaining marriage certificates,â€ he said. â€œEven when you went to Monrovia you would not have gotten it like I did in a dayâ€™s time.â€

The county service centers, he added, bring government services closer to the people. The center is attracting citizens from other counties including Lofa, Nimba, Margibi, and Grand Bassa Counties, Gbaryan said. The four counties have centers, but some residents who live close, prefer the Bong center. He praised the government for initiating the county service center under the Decentralization Policy.

Although citizens have embraced the centerâ€™s signs of showing positive results, there are challenges, he said. The government budgeted funds for the center in the 2016-17 budget that was passed last August, but the county did not receive those funds until May 2017 when the Ministry of Finance Development and Planning, transferred $25,000 to the service centerâ€™s coffers.

All funds generated at the center go to the national government, he said. In addition to the financial constraints, the center lacks logistics. Transportation is a major problem.

â€œYou cannot run the county service center without a vehicle especially a county like Bong, where you have to move around to create awareness about the center and the services we are providing here,â€ Gbaryan said.

â€œDecentralization is a new concept in Liberia and so the government needs to create awareness among its citizens. Some organizations and government entities are spreading the word, but more needs to be done.â€

Naymote Partners for Democratic Development and Community Development and Research Agency (CODRA), has taken the initiative to organize town hall meetings in some parts of the county to educate the residents about the center.