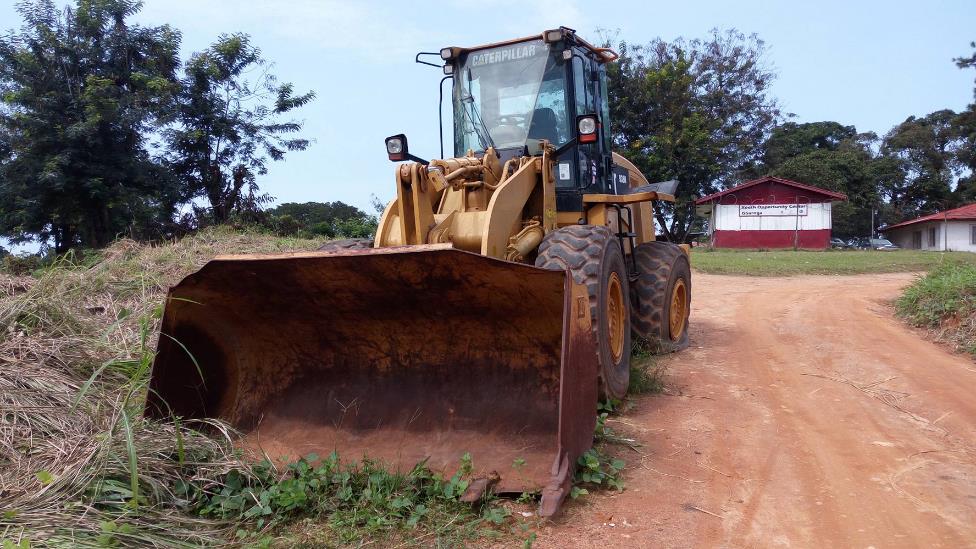 The damage of the front end loader has resulted in a halt in work on streets in Gbarnga and other parts of Bong.

In 2012, construction equipment, including a front end loader, a motor grader, and a dump truck, were purchased for US$650,000 using the County Development Funds as a means of rehabilitating the roads in the county. The dump truck, which is still in Monrovia, has yet to be made available to the county by the vendor because the county still owes the company US$28,000, an amount which must be paid before the truck is released to the county.

While the construction equipment came with a one-year warranty, there was no insurance or extended warranty purchased.

For the past five months, the front end loader has been down and there are contrasting accounts coming from the assistant superintendent for development, Anthony B. Sheriff, and John Youboty, the general manager of MDMC Express, Inc. (the vendor of the machine). Sheriff said parts of the machine became damaged while working on streets in Gbarnga five months ago and they need to be replaced. He said the county already purchased the four parts at a cost of US$1,050 each from the Liberia Equipment Center through MDMC Express, Inc.

Following the installation of the parts by MDMCâ€™s mechanic, Sheriff said the machine managed to start but later produced a cloud of smoke and went off.

â€œThe mechanic Youboty put the four [parts] on the machine but did not lock one of the clips, so when he took it for testing after installing the [parts], the machine cut off and the same mechanic said it was an electrical problem,â€ Sheriff said. â€œThe mechanic left and promised to come back and solve the problem but did not come for some time.â€

He said Youboty later sent another mechanic to Gbarnga who later discovered that the problem was not an electrical one as earlier mentioned. Sheriff said Youboty then promised to send another part to replace the damaged one but has not done so, as promised.

â€œIt is because of the delay that I asked one other heavy duty mechanic to come and see the machine, that was the time the mechanic told us that one of the clips on the [installed part] was not screwed,â€ Sheriff continued.

Sheriff meanwhile said MDMCâ€™s general manager has assured him that the damaged part will be replaced by Oct. 25.

Sheriff said the county does not have a dedicated heavy duty mechanic to provide regular maintenance. â€œHeavy duty mechanics are very few and so the county does not have one,â€ he said. â€œWhen we have a problem with the machine, the county hires someone and pays the person to work on it.â€ Heavy machinery experts generally advise providing regular maintenance to such equipment to extend the equipmentâ€™s life cycle and to avoid costly repairs. When contacted by The Bush Chicken, Youboty said the engine of the machine was damaged as a result of poor management on the part of the county. He said the county had previously hired a mechanic without his consent, although there was no such agreement that he had to approve all mechanics working on the equipment.

He said the mechanics hired by the county had dropped foreign objects in the engine and lost some parts of the machine.

â€œThat is how careless the whole thing was. All they would have done was to contact us because we supply, we have got a garage, and we are into a yellow equipment thing,â€ Youboty said. â€œBut after the man dropped particles in the engine, they never told us.â€

Youboty said he later found out from when an operator of the machine informed the company of the countyâ€™s earlier decision to hire two heavy duty mechanics on separate occasions, to work on the machine.

He said his mechanic realized that the engine had developed a problem when the new parts that were installed later led to mechanical failure as soon as the front end loader was started for testing.

Meanwhile, Youboty said he has officially informed the county that the machineâ€™s engine is damaged and needs a complete replacement.

The regional coordinator of the Catholic Justice and Peace Commission, Jesse B. Cole, believes there were crucial errors in the procurement process of the equipment. Cole has been following the issue with the equipment since the decision by county authorities to purchase it.

He said the US$650,000 amount the countyâ€™s leadership claimed it paid for the three pieces of equipment, is very high. The regional coordinator of the Catholic Justice and Peace Commission, Jesse B. Cole. Photo courtesy of Jesse Cole

“For me, I raised this issue with our leaders from the onset that the amount was too high for the two equipment and the dump truck, but they did not listen to us,” Cole said.

He said it is frustrating that the equipment that should be reconditioning streets in Gbarnga and other roads in the county will instead be parked for about five months because of what he calls â€˜poor management.â€™

“The county leadership should have put in place a clear management strategy for these equipmentÂ but that was not done,â€ Cole continued. â€œThis is the result of our leadersâ€™ failure to manage the county’s resources well.”

He recommended that the county sell off the machine and use the funds to help with the stalled project to pave selected streets in Gbarnga. Most of the streets in Gbarnga including Broad Street are in a deplorable condition as a result of erosion from the rains. Collins Street (from Chief Compound to the Millionaire Quarter Community) is among the badly damaged streets in Gbarnga. Several parts of the street are filled with deep potholes, while other areas lack culverts.

Besides the front end loader, a truck owned by the county also sits in a state of disrepair. Former superintendent Ranney B. Jackson Sr. and former chairperson of the Bong County Legislative Caucus, Rep. George Mulbah, used US$10,000 from the County Development Funds to travel to Baltimore, Maryland, US., to negotiate a sisterly relationship between Bong County and the American state of Maryland. The truck donated by the American state of Maryland. Photo: Moses Bailey

As a result of that arrangement, the now damaged truck was donated to the county. After the arrival of the truck, it was frequently rented out, leading to outcries from citizens about the revenue generated from the rental of the truck but there was no accountability of those funds.

On July 26, 2009, Superintendent Jackson and Rep. Mulbah, also used more than US$150,000 of the countyâ€™s funds to purchase two generators to power streetlights in Gbarnga. The two generators (100 KVA and 250 KVA) are functional but are no longer being used because of a lack of planning to fund the operational costs. Generators purchased for Gbarnga’s street lights but no longer in use. Photo: Moses Bailey

The county authorities have continuously complained about the lack of funds to purchase fuel used to power the generators. Now, they are only turned on when the president of Liberia visits Gbarnga.