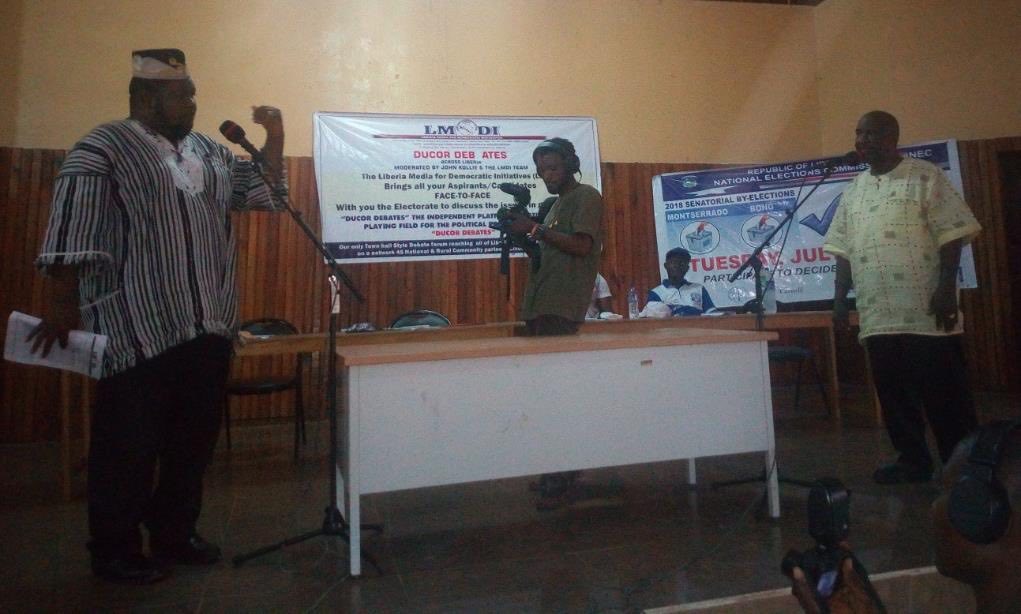 GBARNGA, Bong â€“ Four of Bongâ€™s five contestants in the senatorial by-election in the county faced off on Sunday at a debate organized by the Liberia Media for Democratic Initiatives in Gbarnga.

Candidates at the debate included Josiah Marvin Cole of the Coalition for Democratic Change, independent candidate Henrique Tokpa, Fairnoh Gbilah of the Vision for Liberia Transformation Party, and Prince Kollie of the United Peopleâ€™s Party.

Candidate Orando Zarwolo of the All Liberian Party did not attend the debate; Zarwolo informed the organizers that he was attending his daughterâ€™s graduation in Monrovia.

The candidates explained their respective platforms and addressed some of the trending issues in Bong: the prolonged delay in the construction of the countyâ€™s technical college, the restoration of scholarship programs for citizens of the county, the completion of streets pavement in Gbarnga, and accountability in the management of the County Development Funds topped the list of issues.

With a background in economics and disaster management, Gbilah said if elected senator, he wants to help address the issues of youth development and empowerment, women and girlsâ€™ empowerment, and environmental management to reduce disasters and the corresponding impact on communities in Bong. Gbilah, who was the only candidate at the debate with a straightforward support for a lower Bongâ€™s autonomy, said as a senator representing the county, he would ensure that development was evenly distributed across the county.

â€œAs a consensus candidate from lower Bong County, the marginalized portion of the county in terms of development, we will work to sustain development in upper Bong and create new development in lower Bong,â€ Gbilah said.

Henrique Tokpa, the former Cuttington University president who has a background in economics and development studies, outlined education, agriculture, health, and reconciliation as priority pillars in his manifesto. â€œMy vision for Bong County is to provide education opportunity for young people as I did when I was president of Cuttington University for 13 years. I am a farmer, and I intend to attend to the needs of the farmers in Bong County, possibly by providing loan opportunity and negotiations or be it fertilizer or what have you,â€ Tokpa said.

As for creating another county in the lower portion of Bong, Tokpa said: â€œI think the decision to divide Bong County is purely political and not based on any empirical studies. My position is that if this is a political decision on their part, I will not reject it.â€

Marvin Cole (recently elected as representative of Bongâ€™s third district) spoke of unity and reconciliation, equal opportunity for all, and holistic development as key aspects of his platform. On creating a new county in the lower side of Bong, Cole punted: â€œAs a politician, you canâ€™t speak to something that is not before you when it has a legal basis.â€

He further said, â€œThe constitution of the Republic of Liberia, Article I said, all power inherent in the people, and all laws that should be made should be meant for the governance and the happiness of the people with their coexistence. So if any law that tends to divide our people, I, Josiah Marvin Cole, will not support anything that is unconstitutional.â€

Prince Kollie, who has a background in agriculture, said he wants to be senator to furnish the laboratory of the Bong County Technical College with equipment for the students to use to improve productivity for farmers across the county.

â€œIn 100 days upon my election, I will furnish the laboratory of the technical college. I have come to tell you people that Bong County will feed itself in food production. In three months, the seven electoral districts will produce vegetables through the importation of improved seeds,â€ Kollie noted.

On dividing Bong, Kollie revealed: â€œI believe in unity and I stand for one Bong County.â€

Earlier on at the opening of the debate, the moderator, John Kollie, said his organization is staging two debates in Bong to provide the space for candidates to face the electorate and explain their platforms.

He said the last debate will be staged in Salala, in lower Bong, on Thursday.

The Gbarnga debate was attended by the chairman of the National Elections Commission, Jerome Korkoya.

Voters in Bong and Montserrado will go to the polls on July 31, 2018 to vote two senators to replace then senators Jewel Howard-Taylor and George Weah who were elected vice president and president, respectively, in the 2017 elections.