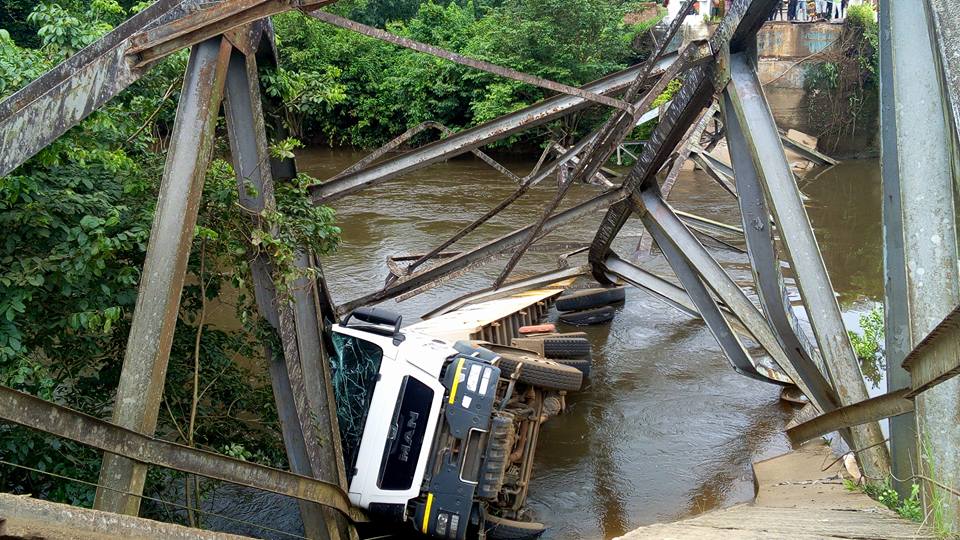 HARBEL, Firestone â€“ The 15-Gate route to Harbel has been shut down due to the collapse of the Du River Bridge.

The steel bridge, located in Firestone Liberiaâ€™s Second Division Camp, is a major bridge encountered on the route from Harbel to the 15-Gate junction.

A truck loaded with crushed rocks and which was involved in the ongoing construction at the Roberts International Airport was crossing the bridge when it collapsed along with the bridge into the river. The driver of the truck, Augustine Fayiah, was taken to the Firestone Du-side Hospital for treatment.

The collapse of the bridge poses problems for patients making their way to the Du-side Hospital. Patients coming from Harbel, Monrovia, Unification City, and Buchanan will now have to use the Division 16 route to get to the Firestone-run medical facility.

The news also took many students and commuters by surprise as some had earlier used the bridge or were expected to do so later during the day.

Many students attending the Harbel Multilateral High School who reside in Division Two and other communities nearby said the collapse of the bridge made it difficult for them to get back home.

The students, who usually hitch rides to school by the side of the road, said they will have a tough time commuting for the remainder of the academic period.

The affected route is also used every morning by hundreds of students of the University of Liberia Fendell Campus.

The closure of the bridge means students from Harbel attending the University of Liberia have to access the universityâ€™s Fendell campus via the Red Light route, which is a costlier and longer route.

Omudu Mollay, a student of the University of Liberia who lives in Harbel, said he must now raise a significant amount of money to complete the writing of his midterm examinations this week.

â€œThe Du-side route is like a blessing to us. It is cheaper and [an easier] commute than going to Monrovia,â€ Mollay added.

As for those traveling from Harbel to Kakata, they will now have to use the Firestone 26 Gate route to enter Kakata through Fourteen Road.

Though the actual cause of the collapse has not yet been disclosed by the management of Firestone, former engineering manager for Firestone, Legori Sekajibo, believes that the situation might have resulted from active sand mining activities a few steps from the bridge. He said it might have caused the bridgeâ€™s stability to be undermined.

The relatively long duration of the bridge, which was constructed in the 1970s, and the lack of routine maintenance may have also contributed to the collapse.

A few Harbel residents attributed the bridgeâ€™s collapse to the recent detour of all airport-bound traffic towards the bridge as a result of the just-ended ECOWAS Summit at the Farmington Hotel.

For security reasons, the police ordered all heavy-duty vehicles to use the Harbel 15-Gate route to avoid breakdowns on the Robertsfield Highway.