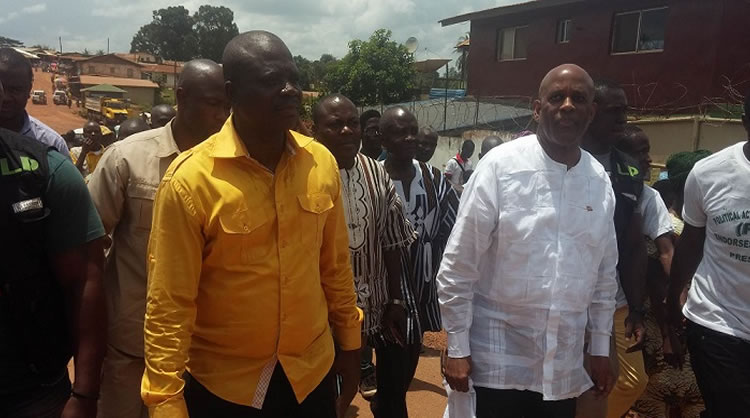 SACLEPEA, Nimba â€“ Charles W. Brumskine and Harrison Karnwea are set to take Liberty Party to the October elections following Brumskineâ€™s declaration of Karnwea as his running mate in a formal ceremony held over the weekend in Saclepea.

â€œI want to thank the committee who has done this selection. This union will not only bring victory to the Liberty Party, but to Liberia,â€ Brumskine said. â€œNimba County has been selected to produce the next vice president of the Republic of Liberia.â€

For his part, Brumskineâ€™s running mate, Karnwea, who has resigned his previous position as the managing director of the Forestry Development Authority, lauded the Liberty Party standard bearer for his choice. He said he and Brumskine are the best political combination to assume the countryâ€™s leadership in January 2018.

â€œI want to thank Cllr. Charles Walker Brumskine, the next president of the Republic of Liberia, for me to be on his ticket that he will take to the leadership on membership of our party at our next convention,â€ he said. â€œSincerely speaking, I see no ticket so unified than our ticket. [On] our ticket, I see real giants in the war to effectively minimize corruption. I see that this ticket indeed is a good magnet that will attract to push the liberty to the leadership of this country of ourâ€¦ 2017 elections.â€

â€œWith this ticket elected and endorsed at our convention, rest assure that victory in the coming elections will certainly be ours,â€ he added. â€œThe Liberian people have certainly reserved Cllr. Charles Walker Brumskine for the presidency of this country.â€

Karnwea was nominated to serve on the partyâ€™s ticket through a special committee assembled by Brumskine. Exactly a month and five days later, the committee presented Karnweaâ€™s name to fill the gap. Fonati Koffa, Musa Bility, and Benjamin Sanvee were among those on the special committee set up by the Liberty Party political leader.

Brumskine made the formal nomination of his running mate this past Saturday.

â€œFellow partisans â€” fellow Liberians â€” as you know, I have run two times, seeking the office of the president of the Republic of Liberia,â€ Brumskine told supporters who had gathered for the announcement.

Karnwea, a former senior member of the ruling Unity Party, said it was an honor for him to be chosen to serve in the capacity of vice standard bearer of the Liberty Party and promised to work tirelessly for the party in acquiring the needed victory in the October 10 elections.

Meanwhile, Rep. Rick Toweh of Nimbaâ€™s sixth electoral districtÂ formally announced his membership in Liberty Party. Toweh, who was elected to the house of parliament in 2011 on the ticket of the defunct National Union for Democratic Progress of Prince Johnson, made the announcement at the end of the gathering in central Nimba.

â€œToday, I want to declare full membership in the Liberty party,â€ he said. â€œAnd you know in our tradition, one person does not go to the Poro of Sande bush. I have come to this party with over 500 persons.â€

The combination of Brumskine and Karnwea on the ticket of the Liberty Party has received mixed reactions from citizens.
David Mentuah, a resident of Ganta, said that Karnweaâ€™s nomination is not a â€œblessingâ€ to the people of Nimba, but rather a â€œcurse.â€ On the contrary, Emerson Drobiah, another resident of Ganta, termed the nomination of Karnwea as â€œa beacon of hopeâ€ for Nimba and said it is time that Nimba make the maximum use of its political strength.