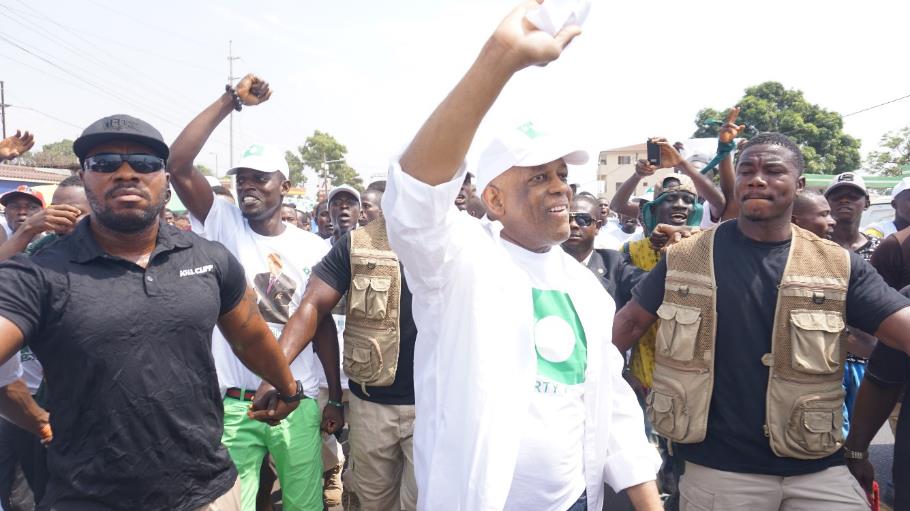 MONROVIA, Montserrado â€“ Charles Walker Brumskine, the political leader of the opposition Liberty Party, has described the current management team at the state-owned Liberia Broadcasting System as the talking tool of the campaign team for Vice President Joseph N. Boakai and his governing Unity Party.

At the closing of his meeting with Farid Zarif, the head of UNMIL, Brumskine said that the management team at ELBC is running a campaign for the ruling Unity Party and reporting negative things about his Liberty Party.

â€œThis is something that should not be happening in a country of ours,â€ Brumskine declared.

He described the action of the state broadcaster as wrong and unacceptable, noting that a â€œmajority of the population does not support Boakai.â€

â€œTaxpayersâ€™ monies are used to pay the salaries of operatives at ELBC,â€ he added.

Brumskine said he had also informed Zarif that Henrique F. Tokpa, Minister of Internal Affairs, is pressuring chiefs and elders in Bong to support Boakaiâ€™s bid for the presidency.

â€œTokpa has threatened to dismiss these chiefs and elders if they fail to declare their support for Boakai in the pending 2017 elections,â€ he added.

He also alleged that the government denied his running mate, Harrison Kanwea, access to a public facility in Maryland, despite the party having the funds to pay.

Meanwhile, Zarif declaimed to comment and said that his meetings with political parties are not media related.

If true, Brumskineâ€™s comments would mean that the elections are not being conducted on a level playing field and that state resources are being used to campaign for Boakai.

When The Bush Chicken contacted Ledgerhood Rennie, the director general of the state-owned radio station, for comments on Brumskineâ€™s accusations, he said ELBCâ€™s management would respond at a later date.

â€œIt is very unfortunate for Brumskine to use the name of [Internal Affairs Minister Henrique] Tokpa to gain sympathy from the international community or Liberia people. Brumskine should know that Tokpa does not appoint chiefs in Liberia and why would he go about threatening President Ellen Johnson Sirleafâ€™s appointees with dismissal?â€ he pondered.

Flomo noted that there is a cordial working relationship between Tokpa, the chiefs, and elders.

While the Tokpa does not have the power to appoint chiefs and other local officials, they do work as part of the Ministry of Internal Affairs and the president often appoints local officials based on the recommendations of the ministry and lawmakers from the respective region.