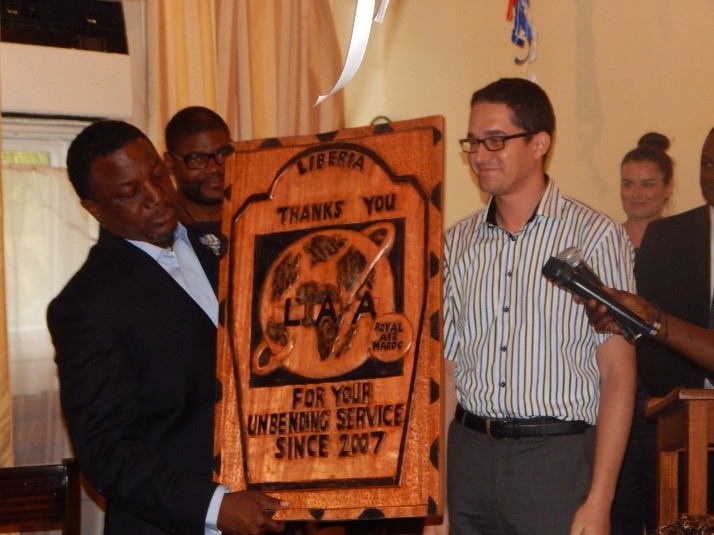 HARBEL, Margibi â€“ During the height of the Ebola epidemic, many airlines discontinued service to Liberia either for fear of spreading the disease or endangering their workers.

Brussels Airlines and Royal Air Maroc were the only two remaining passenger carriers in the country. Both airlines struggled to find alternative routes to Liberia as it became increasingly difficult to transit in other African countries, who fearedÂ exposingÂ their citizens to the virus.

The Chairman of the Board of Directors of the Liberia Airport Authority Gbehzohngar Findley said because of the outbreak of the Ebola epidemic, LiberiaÂ was nearly isolatedÂ from the international community for fear that the country could further spread the virus.

â€œI recall in a meeting with [President Ellen Johnson Sirleaf] that SN Brussels was trying and struggling to come toÂ Liberia, but they had to make aÂ technicalÂ stop,” Findley said. “Gambia refused them; Senegal refused them… I donâ€™t know how they managed to maneuver, but we needed these airlines to bring in the technicians, the necessary medical supplies that brought relief to our people and brought sanity to the leadership of this country.â€ He said despite the country being on the brink of isolation at the time, the two airlines remained faithful to continue their services in the midst of the challenges.

Findley said the government of Liberia was grateful for the airlinesâ€™ services during the Ebola period when the country needed to bring in specialists, drugs, and the necessary equipment that were needed.

Had those two airlines ceased operations in Liberia, the cost of transporting goods and professionals to the country would have increased significantly and deterred many volunteers from arriving in the country at a crucial time.

It is in light of these contributions that the Liberia Airport Authority has honored Brussels and Royal Air Maroc for continuing service to Liberia throughout the Ebola outbreak.

The ceremonyÂ was heldÂ on Thursday at the Firestone Staff Club in Harbel. Brussels Airlines, formerly called Sabena, began flights to Liberia in the 1970s and was the only international carrier that resumed services to the country immediately after the civil war. During this time, other airlines did not consider the security conditions in the country favorable.

Liberia Airport Authority Managing Director Wil Bako Freeman saidÂ Brusselsâ€™ service to Liberia immediately after the war “encouraged many other international carriers to begin operations here and among those that came was Royal Air Maroc, which began flights to Liberia in 2007.â€

Like Brussels, Freeman said Royal Air Maroc has been a reliable partner since it started servicing Roberts International Airport and through the Ebola outbreak.

â€œSo itâ€™s with this caring spirit on the parts of Brussels and Royal Air Maroc that we are gathered here today to recognize them,” Freeman added, as he presented representatives of the airlines with gifts.

The two airlines hailed the government and people of Liberia for the recognition.

Elisa Santos, the Station Manager for Brussels Airlines, dedicated the honor to the entire working staff of the airline and the RIA team for making its continuous service to Liberia possible.

â€œWe worked very close in the past year, and if it had not been for you, we would not be able to stay here,â€ she noted. LoudyiÂ Mohammed Amine, the Country Manager for Royal Air Maroc, praised authorities of the airline for their continuous support. He promised that the airlines would increase its services to the country in the coming years.