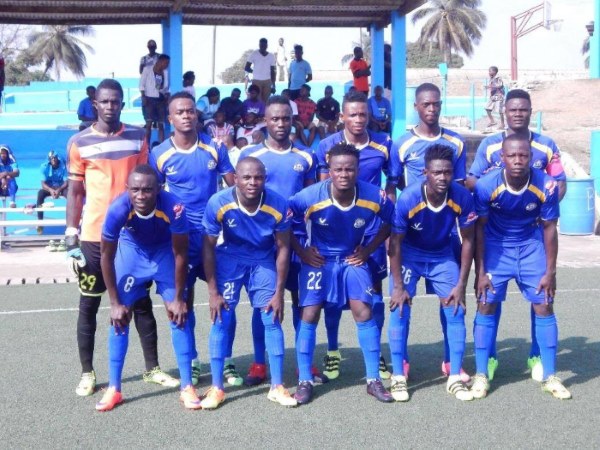 MONROVIA, Montserrado – The 2016-17 Liberia National First Division has come to an end, with league defending champions Barrack Young Controllers keeping the pressure on FC Fassell at the top of the league table.

The Go Blue Boys ended the first phase of the league with a remarkable win away at Nimba United to move to second on the league table.

A 71st-minute goal from captain Van-Dave Harmon was enough to help BYC grab all three points at the North Star Stadium in the Mount Barclay Community.

Despite having most of the scoring opportunities in the first 45 minutes, Nimba United’s Mountainers were unable to register a goal.

Fast-moving winger Stanley Whitfield saw his effort from the right side squandered by a Nimba United attack that looked too shy in front of BYC’s goal.

BYC, however, returned from the break with a better performance than in the first half. Randy Dukuly missed the chance to give BYC the lead after Harmon’s shot from the right flank slipped off goalkeeper Emmanuel Deanneh’s glove.

Both teams were going to the end of the full 90 minutes goalless until Harmon scored the match’s only goal with a right foot strike from within Nimba’s penalty area.

The three points won away from home took BYC to second on the league table with 21 points, seven points behind league leaders, FC Fassell.

Meanwhile, Nimba United, which received just its second defeat at the North Star since its construction, dropped to seventh on the league table with 15 points from 11 games.

The North Star Stadium has always been a difficult ground for traveling teams. The ground was once a slaughterhouse for visitors until FC Fassell set a record by becoming the first team to win at the North Star in round nine of the 2016-17 national first division league.