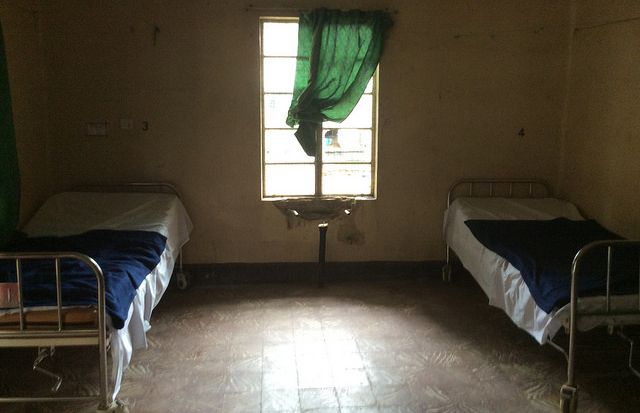 There were two unrelated occurrences of violence at the hospital on Thursday, Feb 19. The incidents involved two patients who were separately taken to the hospital and died while their family members were trying to get them admitted.

According to eyewitnesses, the violence started on Thursday morning after an elderly woman brought her 21-year-old daughter, Bendu Flomo, to the hospital in a critical condition. Witnesses reported that the nurses were cautious about her situation because she exhibited Ebola symptoms. Out of fear of admitting an Ebola patient, the nurses immediately alerted the ambulance to refer her to the nearest Ebola Treatment Unit (ETU).

Flomo died while the ambulance arrangements were still being made.

Following her death, the girl’s mother accused nurses at the hospital of refusing to treat her daughter, a matter that she believes led to her daughterâ€™s death.

In protest, she vandalized hospital property including chairs, buckets, benches, case recording forms and the thermometer.

In a separate incident later that day, Moses Jarkolor, a private security guard, was rushed to the hospital for treatment. Due to the violence earlier, the nurses refused to admit him on the grounds that the triage center, which determines the priority of patients’ treatments based on the severity of their condition, had been shut down.

As with the earlier patient, Jarkolor died outside the entrance of the hospital.

The family members were disenchanted. A group of spectating motorcyclists anxiously claimed that the nurses played a role in the manâ€™s death because of their â€œunnecessary bureaucracies.â€

The incident drew a crowd, which stormed into the hospital compound, frightening health workers. Â The Liberia National Police later intervened and restored calmÂ to the hospital.

Meanwhile, Dr. Kumblytee Johnson, the medical director of C.H Rennie, announced the closure of the medical facility, citing safety concerns among health workers. She urged Margibi county authorities to provide security and safety for the hospital and its staff as a prerequisite for resuming medical services.

â€œThis is the third time we have been attacked at the hospitalâ€™s compound and this time we want our safety and security to be guaranteed before we can re-open the hospital,â€ Johnson pleaded.

Meanwhile, the county’s authorities have made a speedy intervention promising to ensure proper mechanisms are employed to avoid recurrence of the violent situation.

C.H Rennie, Margibi Countyâ€™s only public referral hospital, was badly hit by the Ebola crisis. At least 21 nurses lost their lives due to virus.

The triage is a new hospital measure to determine if a patient has Ebola symptoms before determining whether to grant admittance at the hospital or to make aÂ referral to the ETU.