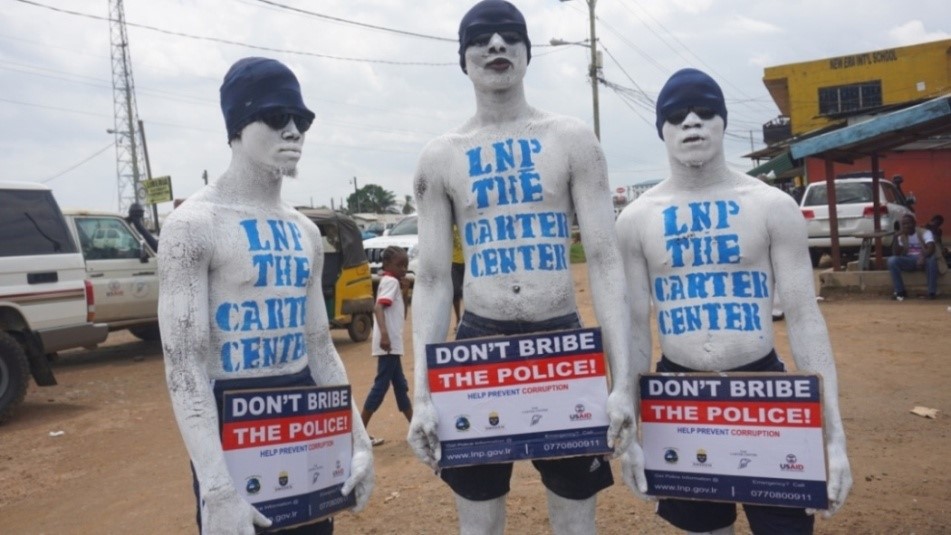 MONROVIA, Montserrado â€“ The Carter Center, in collaboration with the Liberia National Police, USAID, and the Swedish Embassy, has launched an awareness campaign against bribery.

The program, which was held last Friday at the Zone One police station on Bushrod Island, is part of the policeâ€™s 2017 community policing awareness on bribery and access to justice.

Pewee Flomoku, chief of party of the Carter Center, said as the institution continues to wage peace, fight disease and build hope, it believes that preventing corruption is important if Liberians should all be accountable and allow the various institutions to serve the citizenry as well.

The LNP is one of the public institutions with which citizens most frequently interact and Flomoku said â€œmany of these interactions can lead the public to either trust or distrust the police.â€

He stressed that â€œbribery is corruption and it erodes trust.â€

Whereas past discourse about bribery with regards to the police had been focused on police officers, this awareness campaign is more geared towards changing the minds of the public.

Gregory Coleman, the inspector general of the Liberia National Police, said bribery is a two-way street where someone gives and another person receives.

He said while the police are committing itself to avoiding bribes, it is also urging Liberians in general who the police encounter every day that bribery is illegal and â€œcitizens should abide by such rule of law at all times.â€ Coleman said compliance with the law would eliminate the need for bribery, adding that no officer would ever physically assault an individual for refusing to give bribe if he or she requested.

â€œThere is no reason for a driver to offer a bribe when he or she is in compliance with the law,â€ he said.

Josefin Peterson, charge de affairs at the Swedish Embassy in Monrovia, said the embassy has been engaging with the Carter Center to ensure that the â€˜Donâ€™t Bribe the Policeâ€™ campaign includes an active participation from the LNP as well as the various communities in the country. Peterson stressed that campaign should let every officer and community member know to commit themselves to helping professionalize the force and increasing the trust between the police and communities.

Moving forward, Peterson said as UNMIL draws down its operations, the LNP will need to ensure that the security of all within the countryâ€™s borders is protected. She commended the police for the strong leadership displayed so far in taking over the security responsibilities from UNMIL the work done to professionalize the force.

Besides this campaign, Peterson said the Swedish Embassy had also provided support to Liberiaâ€™s Justice and Security Trust Fund and other mechanisms of support to the justice and security sectors in the country.