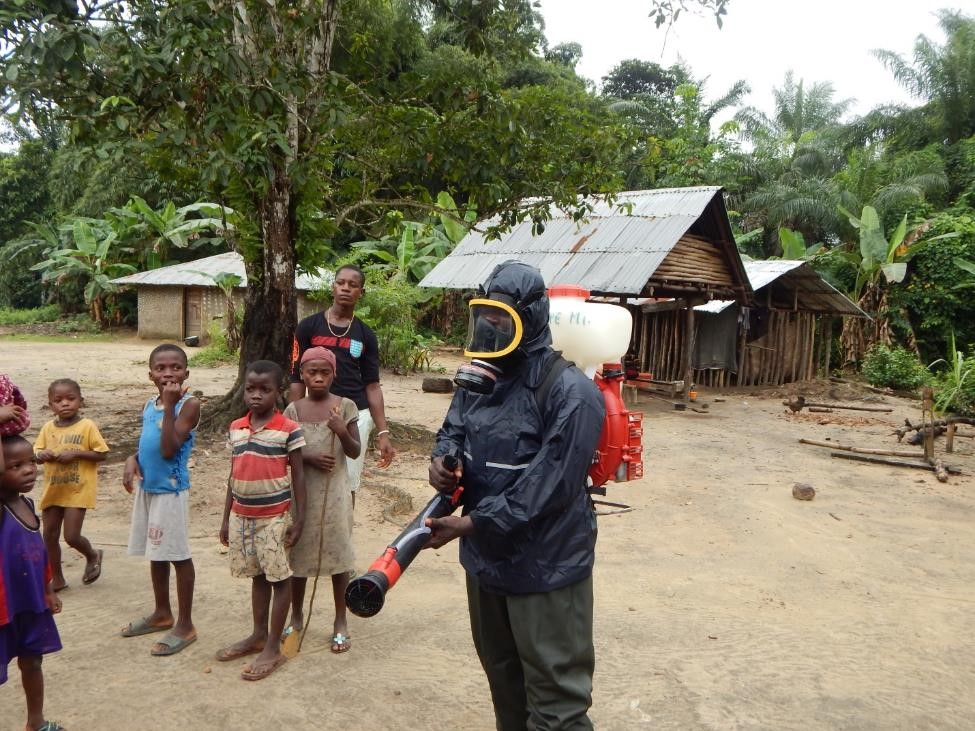 Rufus Johnnie, the district agriculture officer, said their intervention followed reports from the residents in affected towns that their crops are being destroyed and their water sources contaminated by the caterpillars.

Johnnie confirmed the presence of the caterpillars. He said while the caterpillars are eating up all varieties of crops including grains, rice, cassava, and okra, the Ministry of Agriculture is working to put the situation under control.

â€œWe have begun spraying chemicals in the affected areas and sensitizing the residents on how to purify water for drinking,â€ he said. â€œFarmers are advised to stay off their farms for their safety at least a day after the spraying.â€ A member of the MOA team sensitizing residents on measurement of water guard. Photo: Gbatemah Senah

He promised to do more in helping the residents get food and safe drinking water.

In an independent investigation, The Bush Chicken confirmed that before the invasion, the residents’ only source of drinking water were the nearby creeks. There were no hand pumps or wells in the area. Some residents have now resorted to rain as their source of safe water. A nearby creek in Gussin Town. Photo: Gbatemah Senah

Marie Yeasuah, a resident, worries about the diseases that might follow in the aftermath. According to her, children were already suffering from diseases due to improper sanitation. Now things are going to become worse, and the only clinic in the area is barely accessible due to bad roads.

According to the ministry, the caterpillars are believed to be of the African armyworm species.

Editor’s note: The article has been corrected to show that Senator Jonathan Kaipay donated sacks of mineral water sachets and not bottles. Featured photo by Gbatemah Senah.