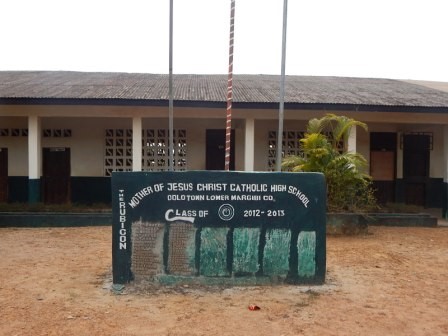 HARBEL, Margibi â€“ Catholic school teachers in Liberia have today staged a go-slow in demand of unpaid salary they say the Catholic Education Secretariat owes them.

The teachers protested across the country in demand of an alleged five-month salary arrears owed them by the CES.

The go-slow was confirmed at Mother of Jesus Christ, All Saints, St. Pius and other Catholic schools visited in Margibi. During the tour of these schools, it was observed that teaching was halted.

Stephen Koikoi, the principal of the Mother of Jesus Christ Catholic School, told the Bush Chicken that teachers at his school only signed the daily attendance log. They did not enter the classrooms.

Due to the situation, Koikoi said he ordered the students to go home and return the next day, in hopes that the teachers will have abandoned the go-slow.

Sunday Clement, the secretary of the Association of Catholic Teachers and Support Staff, told The Bush Chicken on Wednesday that CES had promised to pay them for the period between September 2014 to January 2015. He said CES has since refused, claiming no responsibility to do so. This period marked the peak of the Ebola crisis in Liberia, and regular school activities were disrupted. He dismissed statements by Koikoi that the teachers had agreed to abandon their pursuit of their unpaid salary due to the Ebola situation.

Clement says CES continues to ignore them despite their approaches and interventions.

According to Clement, the teachers sought intervention from the Labor and Education ministries, the leadership of the Catholic Church in Liberia, and the House of Representativesâ€™ Committee on Education. So far, these pleas have not been heard.

â€œAll of these have fallen on deaf ears because the CES [has refused to] adhere to anything we are discussing,â€ Clement said.

He said, â€œWe have been told that the CES says she does not owe us again.â€

Clement told The Bush Chicken that the teachers are seeking strict adherence to their demands, or they would continue the go-slow.

Efforts to contact CES proved futile as the bodyâ€™s secretary-general, Father Sumo Varfee Molubah, did not return our calls by press time.

Meanwhile, some students of Catholic schools have expressed dismay over the situation and encouraged CES to seek an immediate amicable situation.

Betty Quai, a student at a Catholic school, said the action of the teachers would negatively impact studentsâ€™ learning. She said this was a crucial time for students since they had been out of school for a long time due to the Ebola outbreak.

Quai wants the leadership of CES to address the teachers’ concerns quickly in order to resume normal classroom activities.

Joseph Saah, another student, is also appealing to the teachers to abandon the go-slow in the interest of serving their country.

â€œI am really appealing to the teachers to forget about the go-slow and continue the good service they have been doing,â€ he said on Wednesday.

George Toegar, whose children attend schools run by CES, is disappointed over the delay of his childrenâ€™s learning. He called on CES to resolve the dispute with the teachers.