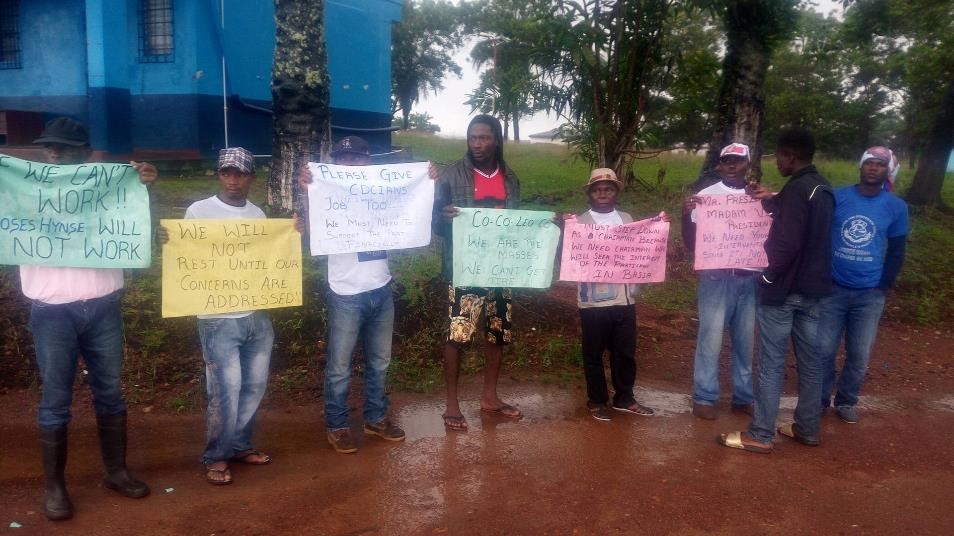 BUCHANAN, Grand Bassa â€“ About 250 aggrieved members of the Coalition for Democratic Change in Grand Bassa have started a protest in Buchanan, calling for their members to be employed in the government.

The protest began on Monday, July 16 with several of the individuals barricading the entrance of the Port of Buchanan.

On Sunday, the aggrieved partisans had issued a press release at the headquarters of one of the collaborating parties of CDC, the National Patriotic Party, calling on President George M. Weah and Vice President Jewel Howard-Taylor to quickly intervene to accommodate their requests.

The spokesperson of the aggrieved partisans, Edwin McGill, said the protest was intended to let the president and the vice president know that members of CDCâ€™s Grand Bassa chapter refused to be spectators while the government worked to realize the Pro-Poor Agenda.

â€œAs we speak, only four persons from the Bassa CDC branch have gotten appointments, to include Moses Hynes (chairman Bassa Branch) city mayor, Flee A. Glay (co-chair press and propaganda) assistant superintendent for development, Peter D. Weah (secretary general) senior labor inspector and Janjay Lewis (assistant secretary general) labor inspector; however, as part of the strategy and commitment that gave us the overwhelming victory in Grand Bassa County, we are deeply concerned with the barbaric and inhumane treatment given us,â€ McGill told journalists.

He noted that until now, none of their fourteen coordinators from the five electoral districts have gotten a job, nor have members of the youth and women leagues or auxiliaries of the coalition.

McGill said the partyâ€™s denying them the right to serve appears to be an organized plan against the Grand Bassa chapter.

McGill said keeping Unity Party officials in top positions in the CDC-led government could undermine the good plans of the president to redeem Liberia from poverty.

He described the delay to employ CDC partisans in Grand Bassa as an attempt to undermine the interest and sustainability of the party. He also said it was a breach of the November 2, 2016 agreement of the coalition, which stated that after the coalition gained electoral victory, all members of the coalition had the right to be part of the national unity government.

A letter dated on March 29, 2018 in possession of The Bush Chicken written by CDC leaders in Grand Bassa and approved by the partyâ€™s national chairman, Mulbah Morlu, recommended 20 partisans for employment at the Port of Buchanan. However, none have been employed.

Also speaking at the press conference was the deputy coordinator for Grand Bassaâ€™s third district, Archie W. Challay, who said many of the Grand Bassa CDC leaders voted for Weah to provide them with employment opportunities, but since CDC became victorious, many remain unemployed, including the coordinators from the districts.

â€œCan you imagine the entire women and youth leagues are marginalized? So, our action is, we are calling on the Liberian government headed by President Weah and Madam Taylor to come to our cry as they told us during the campaign,â€ Challay said. â€œWe are stranded. We cannot find our way out. When we walk on the road, the people can say to us that we have done the dirty job and they are doing the clean work now.â€

The chairman of CDC in Grand Bassa, Buchananâ€™s Mayor Moses Hynes, declined to comment on the protest.

The aggrieved partisans placed planks and rocks at the entrance of the Port of Buchanan to prevent the movement of the employees, prompting the presence of police and claiming the attention of the management of the port.

Speaking to journalists at the entrance of the port, a management consultant at the port, who is also chairman of CDCâ€™s Wisconsin, U.S. Chapter, Meshack Reeves, told the protestors he would contact the leadership of Grand Bassa and other CDCians in power to amicably resolve the situation.

â€œThese are people I do understand have their families and [are] sitting [at their] homes and not doing anything. I know how they feel, but today, we come over here and what we want is [a] peaceful Bassa, because every citizen of Bassa should be able to benefit from this government so when I see these guys doing these things, we cannot come with the same aggression. We have to calm them down,â€ Reeves told a team of journalists.

He assured the protestors that they would be provided jobs.

â€œThis county we came here to employ thousands of people, so right now, what we are doing is we have plans for lots of development and projects, and when we are implementing these projects, we need more people on board,â€ he said, adding that the government would need more than 150 workers employed in Buchanan to implement its projects.

He said within three weeks, he is confident that after meeting with his colleagues at the National Port Authority, there will be a possibility of making available jobs to the aggrieved partisans.

Grand Bassaâ€™s Superintendent Janjay Baikpeh said a protest is not the way forward and urged the partisans to exercise restraint as their leaders continued to make way for their employment.

Baikpeh said he has been engaging companies operating in Grand Bassa on their behalf for possible employment and protesting does not send the right message.

â€œThe government [has] just gone less than eight months; we need to exercise maximum restraint. We cannot be protesting against ourselves,â€ the superintendent said. â€œYou made a government, and you donâ€™t want to bear patience for jobs.â€

In the presidential election runoff, Weah won Grand Bassa ahead of former Vice President Joseph N. Boakai with 74.7 percent of the votes to 25.3 percent.