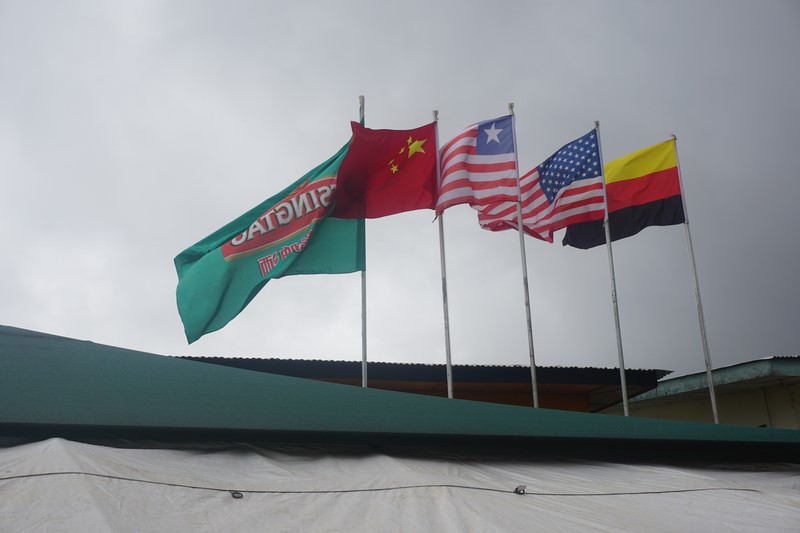 MONROVIA, Montserrado â€“ In Liberia, companies advertising their products and services appear to have no limit on what claims they can make about their offerings, leaving customers at risk of receiving false information.

Although there are undoubtedly many more, The Bush Chicken found two cases of companies which have distributed advertisements containing false claims about their product or service.

Cellcom Telecommunications Inc. and Nyannehâ€™s Company Inc, the importer of Tsingtao Beer, have both had advertisements about their products and services that they have either not proven or are blatantly false.

Cellcom has a promotion currently running that is being advertised on the radios, on Cellcomâ€™s Facebook page, and on fliers at Cellcomâ€™s locations. The promotion offers unlimited calls to the US and other countries for five days for only $1. That claim turned out to be false.

A copy of one of Cellcom’s flyers advertising the *145# promotion.

A customer service representative at the company confirmed that the supposedly unlimited promotion limits users to 20 minutes per day over the period of the five days when the promotion is purchased more than once.

Additionally, during tests conducted by The Bush Chicken, calls would be occasionally limited to five minutes regardless of whether it was the customerâ€™s first or second time purchasing the promotional service. Once five minutes is reached, calls are then dropped.

When The Bush Chicken called the customer care center about the terms and conditions that applied to that specific promotion, the representative said it was limitless for the first activation but upon the second and subsequent activations of the promotion, users would be limited to 60 minutes of calls within the Cellcom network. She did not mention the daily limits for calls to the US or the five-minute limits for each call. Cellcomâ€™s Corporate Communications Strategist, Kimmie Weeks, proved elusive when he was contacted for a statement. He did not respond to calls for a comment and when contacted via Facebook about a story â€œabout false advertisements being conducted by Cellcom,â€ he responded that the writer should have simply asked for his comments as his commenting on a story where the writer already reached a conclusion was pointless.

The Bush Chicken clarified that the issue had already been investigated and it had concluded that â€œthe *145# promotion seems misleading at best and most likely false.â€ The Bush Chicken again clarified that it was not seeking information on whether the claims were misleading or false. Rather, The Bush Chicken requested that Weeks provide comments on whether the company was aware of these ads, if he thought it was fair to customers, and if Cellcom would continue these practices in the future. Weeks provided no further comments. Man: That beer I drinking oh.

Man: No, this beer is different from all the other beers. Tsingtao beer get herbs inside that can reduce your stomach. It can make you feel so good. And one thing, no headache, no hangover, and it can make you [inaudible] good good.

Alcoholic beverages carry empty calories, and usage can lead to a variety of health issues, such as alcohol use disorders, fetal alcohol syndrome, liver cirrhosis, pancreatitis, and laryngeal, esophageal, and oral cavity and pharynx cancer according to the World Health Organization.

In 2010, WHO reported that 7.4 percent of males and 1.1 percent of females in Liberia suffer from alcohol use disorders.Â  Additionally, athletes are generally advised against drinking alcohol, especially close to competition, because of the possibility of negative effects on athletic recovery and alcoholâ€™s affects on the skeletal muscle, hydration, metabolism and neurological function.

Both Michael Nyanneh, the Product Inspector for Nyannehâ€™s Company and Wilson Nyanneh, the owner, were interviewed for this article. Michael was on location at the store while his brother was available for a phone interview.

Both Nyannehs said they stand by the advertisement. They contended that it was accurate and provided truthful information that was not misleading to customers. Michael said, â€œIâ€™m 100 percent sure that itâ€™s accurate.â€ He said there was sufficient information on the internet to support the claims made in the advertisement.

Michael said his company had officials from the Ministry of Health review and approve Tsingtao beer for distribution in Liberia, indicating that it was safe for consumption.

The Bush Chicken pointed out that being certified as safe for consumption, a standard process that all products being introduced to the market follow, is a different argument than being good for athletes and weight loss.

He said the ingredients of the beer would explain its health properties, although a look at a can of Tsingtao beer listed water, malt, rice, and hops as the ingredients. When it was pointed out to him that these were standard ingredients for alcohol, Michael suggested that the information he sought would be available on the internet.

He commenced a search in Google for the term â€œingredients in Tsingtao beer,â€ which produced the same results on the can.

It was at this point that Wilson, who was in the United States for a conference, was contacted via phone. Wilson also stood fully behind his companyâ€™s advertisement. He said the purpose of â€œadvertisement is to promote and market,â€ which is what the radio ads were doing.

It was clear that both Wilson and Michael Nyanneh did not have any proof to support the claims made in the radio ad. In fact, their understanding of the effects of alcohol on the human body was questionable.

During the interview, Wilson initially claimed that the beer made the muscles of drinkers â€œstrong.â€ When it was pointed out that alcohol may be harmful to muscles, which is why countless athletes are advised to stay away from the substance during competition, he tried to explain that he did not mean that it build muscles but was not clear on what he did mean.

Ultimately, the CEO said the best way to determine whether Tsingtao had the properties that the ad claimed it had was to â€œlet the consumer test the productâ€™s effects.â€

He challenged The Bush Chicken to ask consumers about Tsingtao beer, how long they had been drinking it and what effects they had noticed. â€œPeople feel good about it,â€ he said. Throughout the interview, he continued to emphasize that Tsingtao beer was â€œa global product that anyone can drink.â€ There seems to be a bit of uncertainty about which government agencies are responsible for dealing with the issue of misleading or false advertisement. Part of the problem is that the responsibility for investigating these issues is scattered across various ministries and agencies.

When initially asked if his ministry was responsible for regulating advertising for goods and services, Axel Addy, the Minister of Commerce and Industry, indicated that the Ministry of Information and Cultural Affairs and Tourism would be the ones to regulate that area.

At MICAT, Roosevelt Paye, the Deputy Director for Communications, said in the past MICAT has generally been more concerned about obscenities.

However, a brochure Paye provided on commercial advertising noted that media and commercial billboard permits â€œcan be withdrawn for breach of media ethicsâ€ including obscenity, defamation, plagiarism, nudity, and false information.

It is important to note that the withdrawal of permits would affect only the media outlet or commercial billboard company. The advertising company would technically be free to advertise with another outlet.

When asked about previous breaches, Paye said as far as he knew, MICAT had not issued any fines to companies for false advertisements. â€œWe have not come up with any penalty,â€ he said. â€œSo we just [have a] dialog.â€

Paye said in the past when they have had issues reported with advertisements, the ministry talks with parties involved to have it resolved. Among some of the employees at MICAT, there seemed to be much confusion about whether MICAT was even the proper entity to deal with such issues.

Speaking by phone, Lawrence Bropleh, the former Minister of Information, said the issue with Cellcomâ€™s false advertisement allegations would best be dealt with by the Liberia Telecommunications Authority. He said the Ministry of Commerce and Industry, on the other hand, should be responsible for Nyannehâ€™s Companyâ€™s claims about Tsingtao beer.

Bropleh said although such false advertisements have been happening for a long time, Liberians have largely ignored them, which he suggested is why it continues to go on.

Harry Yuan, one of the commissioners at the Liberia Telecommunications Authority, confirmed Broplehâ€™s assertion that the false advertisement issue with Cellcom â€œfalls directly in our area.â€

A manager at LTA who spoke anonymously because he was not authorized to speak to the media said telecommunications operators â€œtend to make outrageous promotionsâ€ in a rush to make profits. Often, these end up being confusing to consumers, misleading, or plain false.

He said LTA has been organizing a series of events to educate consumers. However, the authority generally does not go out to solicit complaints. Consumers are responsible for reporting issues with telecommunications operators if they encounter issues and have attempted to seek redress with the operator. Once the complaint reaches LTA, the authority then summons the company.

If the issue is misleading or false information and not a technical glitch, LTA then takes the appropriate measures against the company.

For this particular case, the manager advised a clear documentation of the incidence and submission to LTA in writing including detailing of all interactions with Cellcom. He said LTA had a hotline for consumers to report such issues but it is currently deactivated as the helpdesk is being restructured.

At the MOCI, employees who spoke anonymously because they were not authorized to speak to the media concurred that the advertisements for Tsingtao beer were misleading and was therefore illegal under the Commercial Code.

The Ministry of Commerce encouraged consumers to report such false claims or any issues with products sold on the market. Consumers are advised to call one of the three hotlines, depending on their carrier â€“ 9911 for Lonestar, 991 for Novafone, and 6624 for Cellcom. In addition to visiting the ministryâ€™s physical office at the intersection of Ashmun and Gurley Streets, consumers can also submit a complaint form online.

The MOCI employees said after they investigate issues with companies advertising products falsely or making claims that were misleading, they would make a recommendation to their legal team to take the issue to court. In court, MOCI lawyers could seek damages either to penalize the company or to get reimbursement for consumers.

As an example of MOCIâ€™s potential powers, the employees cited a particular case where Sethi Brothers had to pay millions of US dollars for zinc roofing sheets that did not work as advertised.

In Liberia, where the population is largely illiterate and uneducated, it is much easier for companies to take advantage of consumers with unverified claims that may go unquestioned.

Additionally, citizens disillusioned with their government may be less likely to report what they may view as false or misleading advertisement.

When asked about whether the government should be responsible for dealing with these issues of false advertisement, William Wesseh, a biomedical engineer, said he did not believe it could happen â€œin a country like Liberia where thereâ€™s a high level of corruption.â€

He said even though it is the governmentâ€™s responsibility to ensure that the public is protected, it is up to consumers who find services and products unsatisfactory to leave those companies. â€œIf you think that Cellcom is not giving the service to your expectation then you leave it and go to another company,â€ Wesseh said.