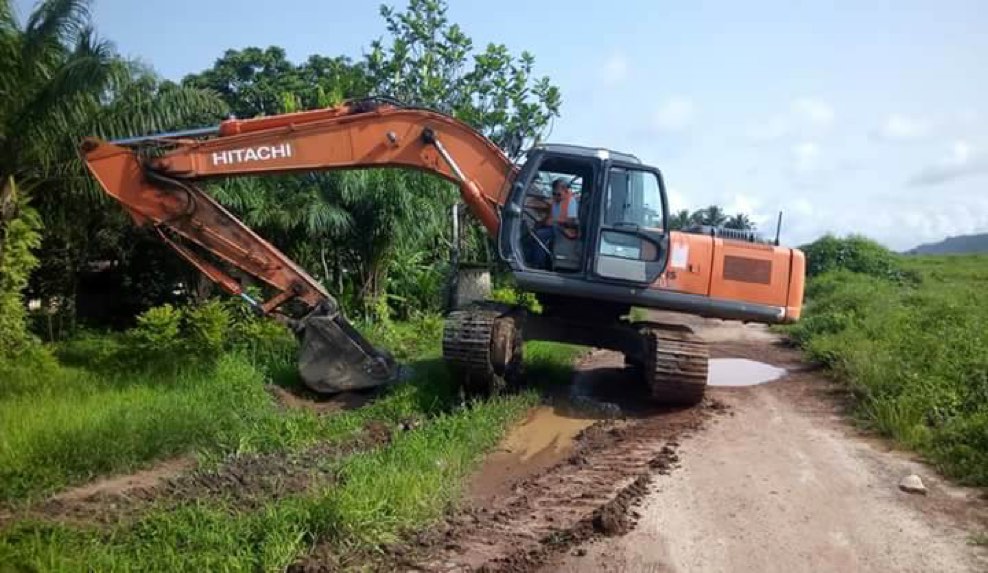 HARBEL, Margibi â€“ The Dolo Town Health Center, located in Margibiâ€™s second district, has over the years been cut off from the rest of the community due to deplorable roads during the rainy season. Many patients facing emergency are rushed to the much farther ELWA Hospital in Paynesville, Montserrado or the Firestone-run Duside Medical Center.

Early Tuesday morning, it appeared that the situation would now be changing when a celebratory crowd gathered around a construction equipment belonging to Sino Hydro, a Chinese contractor rehabilitating the Roberts International Airport runway. The firm has been working to rehabilitate the road.

David Mulbah, sectional head of Dolo Town, said the intervention of the Chinese company signifies a new dawn in the history of the town, as he said the health facility serves more than 50,000 residents of Dolo Town and nearby communities like Unification City, Peter Town, Barclay Farm, and Cotton Tree.

â€œMy saddest moment as a community leader was five years ago when a pregnant woman in a car stuck in the mud gave birth to a twin while being rushed to the health facility,â€ he said. â€œTo the dismay of all, one of her twin babies died few minutes after due to delay in getting to the clinic.â€

Mulbah frowned at Firestone for having done nothing to give back to a community that shares a direct boundary with the concession.

â€œWe have engaged Firestone Liberia on numerous of occasions, but sadly, the company has turned down all requests,â€ he added.

He thanked Rep. Ivar K. Jones of Margibiâ€™s first district for engaging Sino Hydro to recondition the road to the health facility.

Speaking at the start of the work, Jones said as part of his oversight responsibilities he will ensure that feeder roads in the district are reconditioned. â€œIt is not all about doing business and making profits. We will ensure that companies and institutions operating in the district give back to the community in bettering the lives of locals,â€ Jones said.

â€œDuring the period of campaigns, we listened to the plights of our people. Now that we won, giving back to the people and maintaining the trust the people have in us is our foremost priority.â€

The general manager of Sino Hydro, Xu Chao, said his company was pleased to identify with the people of Dolo Town and that the initiative is the companyâ€™s way of working with the new representative.

He said the reconditioning of the road will take three to four days. During that process, drainages will be opened at both sides of the roads to avoid flooding.