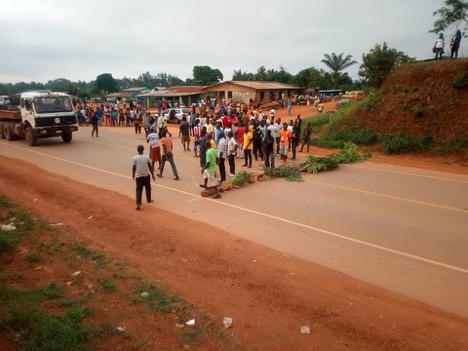 The drivers said they wanted to â€œclaim the attention of President George Weah and the governmentâ€ on the increment in fees for vehicle registration, compulsory insurance, and driverâ€™s license, as well as alleged police harassment and extortion of money from drivers plying the road.

Philip Quennah, the spokesperson of the commercial drivers, said they had previously been paying US$30 for a driverâ€™s license that lasts for three years; however, the fees have now been increased to US$45 for a license that is only valid for two years.

Quennah noted that the total cost of registering a taxi cab, including the cost of insurance and driverâ€™s license, is US$565, an amount he said is too high when taking into account the current difficult economic situation in Liberia.

â€œThis money is too much for us. We are asking the central government to reduce the registration fees and remove the illegal checkpoints from the road,â€ Quennah said in an interview with reporters.

Quennah said the decision by the commercial drivers not to run traffic was taken at the national level. The drivers are also calling on the government to ensure that vehicle inspection is done during a particular point in time during the year, instead of the random inspections. They claimed that the police use the random inspection to extort money from them.

However, the regional police commander for Bong, Lofa, and Nimba, Morris Teamah, has directed the protesting drivers to return to their various parking stations and clear the highway for the free flow of traffic.

Addressing the driversâ€™ allegation of police extortion, Teamah said the drivers need to prove their claims.

â€œThey do not have facts; they should cite instances. Let them bring one or two references,â€ Teamah noted.

He said the police places additional cones along the road during the night hours to help curb crimes and track fleeing criminals, contrary to the driversâ€™ claim that the cones are meant to extort money from drivers.

He said the actions of the drivers is an â€œinfringement on the rights of others.â€

â€œWe are calling on the driver unions, civil society organizations and other rights-based groups to tell the drivers to sit in their various parking [stations]. their message will still reach the government,â€ Teamah told Radio Gbarnga Monday morning.

Bongâ€™s police superintendent, Frederick Nepay, said the police is doing everything possible to ensure the drivers are removed from the road. â€œWe have just cleared the roadblock from Totota. This is not good. Our people should not always take the law unto themselves,â€ Nepay said.

One of the drivers, Paul David, was seen wearing his shirt, fastening his belt, and wearing his brown footwear at the police headquarters in Gbarnga Monday morning. Paul David, one of the drivers. Photo: Moses Bailey.

He claimed that police arrested and beat him along with some of his colleagues.

â€œThe roadblock was not to prevent private vehicles or government vehicles from passing. We were preventing only our colleagues who are commercial drivers that do not want to abide by the agreement that we should not run traffic today,â€ David told The Bush Chicken.

Meanwhile, passengers intending to travel have been stranded and were seen with their belongings at different parking stations in Gbarnga and along the road.