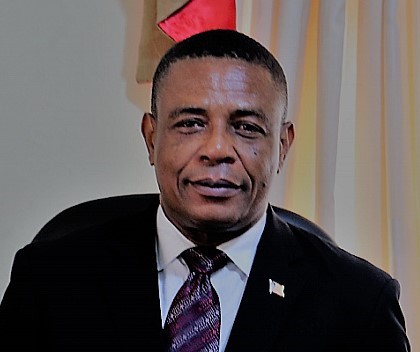 MONROVIA, Montserrado – Ndubusi Nwabudike, the Nigerian national who chaired the Liberia Anti-Corruption Commission, is finally leaving his LACC position following mounting pressure for him to be removed over unproven naturalization record.

Nwabudike’s citizenship came under question when he was appointed by President George Weah in March 2020 to serve as chairman of the National Elections Commission to replace Jerome Korkoya, whose tenure had ended.

His appointment was later withdrawn by the president following widespread criticisms from members of the public, particularly on his questionable citizenship. He later returned to LACC, where he was serving as executive chairperson before his failed NEC nomination.

However, Nwabudike’s questionable citizenship record uncovered during his confirmation hearing still haunted him. He had told senators that he naturalized as a Liberian at the age of 17 in May 1982. However, the senators found inconsistencies in how he obtained his Liberian citizenship. The citizen and naturalization law during the period required that only people who had reached the age of 21 were legally eligible for naturalization. He was, therefore, denied confirmation.

The Liberia National Bar Association, of which Nwabudike was a member and once served as secretary, also expelled him after an investigation into the citizenship claim, as Liberian law restricts the practice of law to only citizens.

In June 2020, Montserrado’s Sen. Darius Dillon called on the president to dismiss the controversial Nigerian as head the country’s anti-corruption commission.

“While I am not demanding President Weah to remove Cllr. Nwabudike, it is a call that the president must immediately carry out due to prudence,” Dillon said.

The lawmaker was joined by several activists and civil society groups requesting the president to remove Nwabudike from the LACC.

However, Nwabudike was not dismissed by the president but was reportedly asked to resign amid the growing pressure.

The Executive Mansion disclosed on February 1 that the president had received the resignation letter of Nwabudike and had accepted it in good faith.

“In the letter of resignation dated January 27, 2021, Counselor Nwabudike thanked President Weah for affording him the opportunity to serve his country.”

The former LACC chair reportedly wrote, “The monumental progress made by the government in the fight against corruption, both in the public and private sectors, is being marred by public debate of my person rather than what contribution I can make towards the economic development of our country.”

He added, “It does not serve the overall strategic interest of your government and our people if I were to constitute a distraction from the national agenda that your government is poised to deliver to our people in the next three years of the Pro-Poor Agenda for Prosperity and Development.”

Nwabudike was appointed to the anti-graft body in October 2019. He also previously chaired the Governance Commission in 2018 and led a five-member team of lawyers and prominent Liberians on a Special Presidential Committee to examine claims of corruption in the oil sector and the misappropriation of donor funds at the Ministry of Agriculture in 2017.

Sharing
Tags Ndubusi Nwabudike
Contributions to The Bush Chicken are not tax deductible.