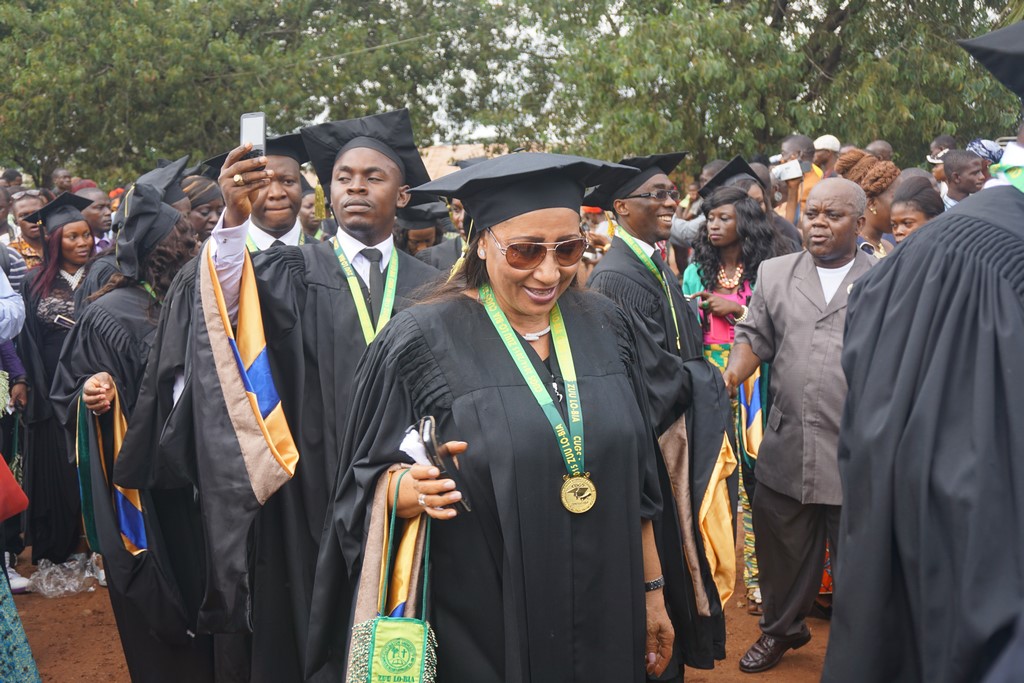 It is a phrase Cuttington University President Henrique Tokpah has been repeating throughout this graduation season. The university held its commencement ceremony on Sept. 26, in what is set to be the last for its longtime president.

The ceremony was supposed to occur in June but was pushed back because of the Ebola outbreakâ€™s effect on the academic calendar.

Although he was associated with Cuttington before, Tokpah took over as president in 2002 and has led the university during times of war and rebuilding. As he leaves, the university remains unquestionably the most prestigious in the country, educating the children of many of Liberiaâ€™s elite. Students from a local school band play outside the graduation. Photo: Jefferson Krua

The commencement ceremony was the 54th such program held since the new Cuttington University reopened in 1949, after having closed for financial reasons in 1929.

Tokpa leaves an enormous mark on the university, having steered the university through the off-and-on civil crisis. He also presided over a major increase of the universityâ€™s student and faculty body, from 558 students and 69 faculty members when he took over to nearly four times that number now. The university now has a junior college and a graduate school, both of which were started during Tokpahâ€™s tenure.

Indeed, so significant is Tokpahâ€™s impact on the school that a statue has already been erected in his honor on campus grounds. His successor is the former Minister of Education and current head of the West African Examination Council, Evelyn Kandakai. Tokpah will go on to serve as the chairman of the board of directors of the National Port Authority. Saturdayâ€™s commencement ceremony was headlined by the Vice President of Sierra Leone, Victor Bockarie Foh, who was awarded an honorary Doctorate of Humane Letters by the university.

Foh gave a rather dull address that mostly recounted the strong historical ties between his country and Liberia.

â€œMost Sierra Leoneans have grown up to regard Liberia as a second home,â€ Foh said, as he listed the ties that bound the two nations including their founding, their civil wars, and the Ebola outbreak. â€œIt is friendship and relationship that goes back aÂ long time in history.â€

Foh repeated trite soundbites such as â€œLearning is better than silver and goldâ€ before finally providing the graduates with concrete advice. He urged them to understand the socio-economic context of the country in which they were graduating.

â€œModerate your expectations,â€ Foh said. â€œGovernment simply does not have the capacity to absorb everyone.â€ He challenged the graduates to be innovative and self-reliant.

The ceremony at times seemed disorganized, with an occasionally noisy atmosphere that made it difficult to hear at times, even when the Sierra Leonean Vice President was speaking. Adding to the noise was the fact that there were several individuals standing in the aisles, preventing seated guests from viewing the program uninhibited and causing commotion at times. The auditorium did not have enough capacity to seat the crowd and an announcement to the audience that the program was being televised live in the chapel was not made until 38 minutes into the program. Even the marching of graduates was disorganized, with non-graduates often trying to enter the area reserved for graduates and resulting in arguments with security personnel.